Marconi spent the summer on a 4,400-mile biking journey 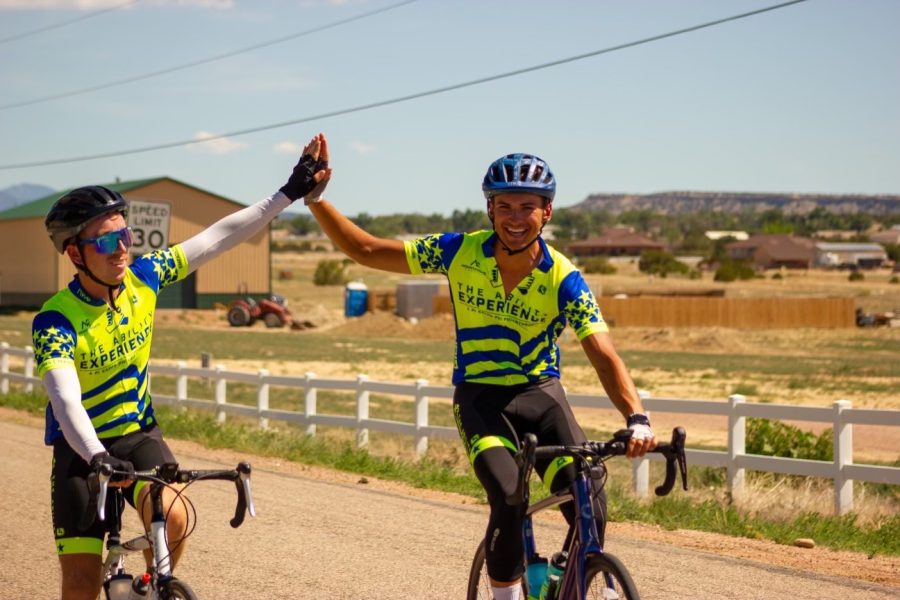 Junior Charlie Marconi sits across from me at a picnic table outside of Benson, scrolling through his recent outgoing and missed phone calls. As he does, one name flashes on his phone more than the others: Emily Waldo, one of the many “life-long friends” he made while biking 4,400 miles from Seattle, WA to Washington DC this summer for a Pi Kappa Phi-affiliated philanthropy event dubbed “The Journey of Hope.”

The Journey of Hope brings together brothers from different Pi Kappa Phi chapters to bike across the United States with the goal of raising money for the fraternity’s philanthropy initiative: The Ability Experience. Since its establishment in 1997, this nonprofit’s mission statement has been to “use shared experiences to support people with disabilities and develop the men of Pi Kappa Phi into servant leaders” by instilling in them a passion for public service.

The above graphic shows the stops along Marconi’s route.

Wake Forest University’s Pi Kappa Phi chapter — of which Marconi is a Founding Father — was established in 2020, making it the university’s newest fraternity. Marconi is the first member of this chapter to take part in the trip, although two more Wake Forest-affiliated brothers now plan to join the Journey in 2023.

“In January, I realized that I didn’t want an internship this summer and that this was an opportunity to do something crazy hard and fun and meaningful,” Marconi said. “So I signed up, and my chapter brothers bought me my equipment since I was the first one to do it. Then I just trained for a few months and I was ready to start.”

And so, with two sparsely-packed bags containing only clothes, a toothbrush and shampoo, Marconi boarded a plane from his hometown of Boston to Seattle to begin the first leg of the journey.

The participants’ daily routine for the duration of the trip began with a 4 a.m.wakeup call; they huddled around a whiteboard that detailed the intended route for the day before hitting the road to bike anywhere from 50-130 miles. After a six-to-ten-hour ride, they scoped out a local YMCA to shower at before crashing for the night at local organizations, often sleeping in churches or on the floor of high school gymnasiums. And then they got up and did it again. And again, nearly every day for over two months.

To stay on schedule, the team only took unscheduled for imminent safety concerns: lightning storms and temperatures over 120 degrees Fahrenheit, both of which occurred during the journey. The rain that swept over Washington during the first week of the trip and the 110-degree weather the team later experienced during a 127-mile-long ride in Arkansas were just part of the experience — parts that contributed to the mental, as well as physical, challenge.

Out of the 67 days they were on the road, 30 of them involved a “Friendship Visit,” in which the Pi Kappa Phi brothers met with people from different disability advocacy organizations across the nation, including several Ark Foundation and Lion’s Club chapters as well as local nonprofits. The fraternity typically contributed a grant of between $500 and $1,000 to the groups during these social visits.

“People told us that it’s kind of like Christmas when the Journey of Hope team comes through,” Maconi said. “People [in these organizations] were always super excited to see us and it’s a fun way to make new friends and show our support.”

It was at one of these events that Marconi was introduced to Waldo, a woman involved with the Special Olympics of Colorado. After the brothers left Denver to continue their journey, Waldo continued to call them every day before they began their bike ride; their morning started at 4:00 a.m. in every time zone, meaning that by the time the team was in the Appalachian region, Waldo was calling them daily at 2:00 a.m. mountain time.

By the time the Journey of Hope concluded, Marconi had raised the most money of the participants; the $22,500 he was able to raise was a product of his networking and fundraising efforts over the past six months.

“I reached out to almost all the contacts in my personal life — family, friends and friends of friends, anyone who might be willing to donate,” Marconi said. “There was a lot of sending emails and calling people to explain what I was going to do with my summer. I reached the minimum goal of $6,500 within three weeks and decided to keep [fundraising]… Raising more money for people with disabilities can’t hurt.”

As Marconi begins the fall semester of his junior year, he notes that the lessons imprinted upon him during the Journey of Hope ring more true than ever.

“I used to use this all the time to get to class,” Marconi said, gesturing to the longboard resting against his chair. “But now that I’m back on campus, I like to walk to class.”

He continued: “We learned that it doesn’t matter how long it takes to get where you’re going; it’s more about how you spend that time thinking, taking in your surroundings and fully experiencing whatever is happening. So now I like to walk and notice what’s going on around me… Living in the moment is valuable – and that might sound cheesy, but it gets less cheesy once you do it.”