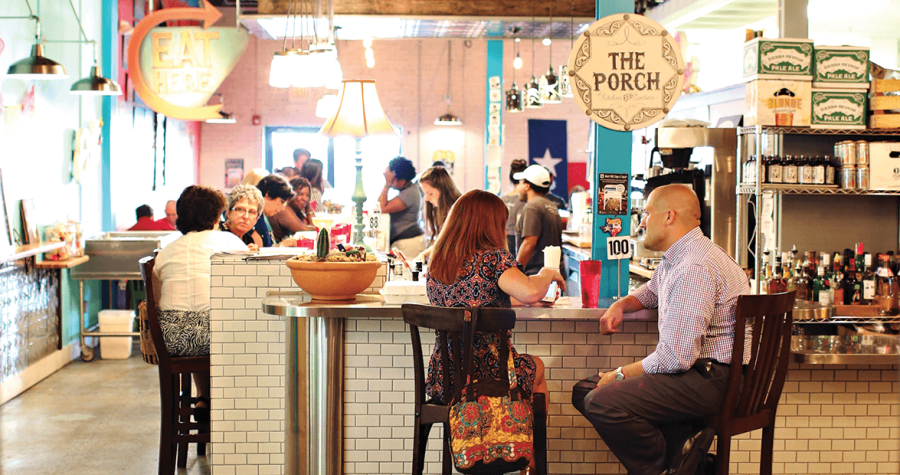 Courtesy of Our State

The Porch Kitchen and Cantina boasts a comforting environment.

Most students at Wake Forest are familiar with The Porch Kitchen & Cantina, commonly referred to as ‘The Porch.’ Nestled deep in downtown Winston-Salem, off of W Northwest Boulevard, the restaurant has gained impressive popularity amongst students in the past decade. Both the Tex-Mex cuisine and the lively atmosphere draw crowds all nights of the week.

Claire Calvin opened the restaurant in 2014 as an extension of her meal delivery service, “Dinners on the Porch.” According to Calvin, the original business concept was conceived out of a perceived demand for fresh, home-cooked meals without the hassle of grocery shopping or going out to a restaurant. After about a year, her passion for food and for this new business led her to establish a conventional-style restaurant that she named “The Porch,” as a nod to its predecessor. The menu, Calvin says, is inspired by her time in Houston, Texas, and her desire to bring some of that unique Tex-Mex flavor to North Carolina.

When asked about her plans and expectations for The Porch when first opening, Calvin reveals that she had not anticipated so much attention from college students.

“I think it all happened very organically,” Calvin said.

While the business was never intentionally marketed towards this demographic, the casual and festive ambience, comfort food, and its proximity to the Wake Forest campus all make it a prime dinner spot for students. It may be surprising that what started as a meal service and later a family-friendly Tex-Mex establishment, has become a hot-spot for young adults, but it maintains its reputation as a destination for all ages.

The Porch is known for its comforting atmosphere. Calvin attributes this in part to the staff, and describes the work environment as “tight-knit” and collaborative. She claims that the crew is very much a team, and each individual brings a unique energy to the restaurant. “It’s just a very inclusive, very welcoming group of people,” she explains. Calvin, herself, can often be found on the floor Friday and Saturday nights. She has a very hands-on ownership style and “is always there in some capacity,” in addition to juggling her responsibilities as a mother and her other businesses.

The menu itself includes a wide variety of dishes, ranging from the “Dirty, Spicy Tots” to “Dr. Pepper Pot Pie” to a “Petaluma Salad.” There is an option for everyone, whether you are in the mood for an adventurous combination of Southern comfort and Mexican, a salad or rice bowl, or just an old-fashioned taco plate. The Porch also boasts a fairly extensive drink menu, which comprises many classic cocktails and some unique, local choices, such as the “Millworks Lawnmower,” made with gin, lemon, simple syrup, mint, and ginger beer, and the “Salem Drop Martini,” a mix of lemon juice, herbal simple syrup, and vodka. One of Calvin’s own favorites, the “Sweet Pete Puffy Tacos,” is the epitome of Tex-Mex: a fried chicken taco drizzled with Texas Pete honey.

The hype amongst Wake Forest students is undeniable, as is proven by the increase in patronage during the school year. Calvin expressed her excitement for the students’ return to Winston-Salem this week, as she is looking forward to the visits. Sophomore Sadie Nipon calls The Porch her “go-to” dinner destination, and says: “It’s so hard to find time to get off campus, so when you do, you want it to be worth it. The Porch never disappoints.”

“The vibes are unmatched, and you can almost always bet you’ll run into other groups of Wake kids on the weekends,” claims sophomore Claire Whitworth. Even during the move-in periods or on parents’ weekend, it is a popular spot for students who want to show friends and family Winston-Salem.

The Porch will continue to be a Wake Forest student favorite, with its hours from 11 a.m. to 9 p.m. Monday through Saturday. While the character of the restaurant adds tremendously to the experience, anyone looking to enjoy any of the delicious dishes from home can also take advantage of the delivery and pickup options offered. The Porch can be found on both Instagram and Facebook, where it boasts over fifteen thousand followers on both. Calvin is very open to suggestions and encourages input and new ideas from students. She also discussed her plans to open another restaurant – scheduled to open in the spring of 2023 – in Winston-Salem that she believes will be even more attractive to the college-aged population. The tradition of The Porch is likely here to stay, however, as Wake Forest students will continue to uphold it.