Tracking Demon Deacons in the NFL 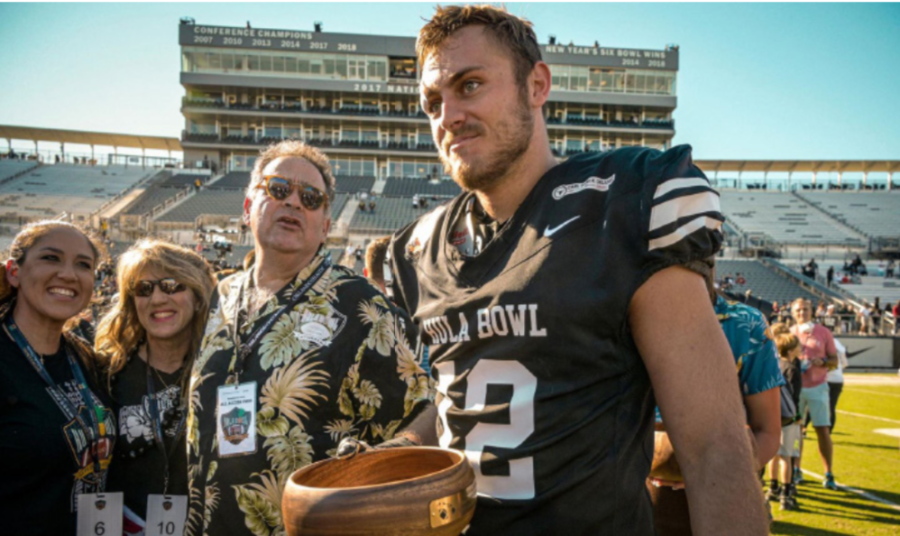 Linebacker Luke Masterson received the Defensive Most Valuable Player award at the Hula Bowl following his last season with Wake Forest, in which he lead the team in total tackles.

With the return of college football season, there is an inescapable current of excitement in seeing the Demon Deacons take the field this year. The crackling energy surrounding the new season is partly due to the incredible highs of last year. Wake Forest broke double-digits in the win column for the first time since 2006, finished first in the ACC Atlantic and took home the Gator Bowl trophy.

Transferring the excitement from the 2021-2022 season to the new slate of games that now lie ahead of Wake Forest is natural. But I think as supporters of this school’s football program, more attention should be on what occurs between seasons: our Demon Deacons beginning their professional careers.

Keeping up with the blooming careers of former players of all Wake Forest sports supports the programs and keeps you in the loop. You want to let your parents know that, say, Will Zalatoris is turning heads at the U.S. Open, not the other way around.

In the same vein, I want to highlight where Wake Forest football players from last season are lined up before the new NFL season begins this week. I am honing in on those players that made 53-man rosters. There are still Demon Deacons waiting for a club to realize their potential, but some teams (Cowboys) just don’t have the right eye for talent, I guess.

With the 140th pick in the 2022 NFL Draft, the Green Bay Packers selected one of Wake Forest’s best linemen of the last 5 years. Zach Tom went in the fourth round to the Wisconsin-based team, which also scooped up two other linemen in the draft.

The Packers saw their offensive linemen sprout holes this off-season with the release of Billy Turner and free agency loss of Lucas Patrick. Tom’s appeal as a young talent that can make a difference in the trenches is obvious; his athleticism allows him to be versatile. Through 37 starts with Wake Forest, the Prairieville, Louisiana native transitioned from center to left tackle, with only 2 sacks allowed for his collegiate career. Now, the Packers currently have him listed as the second-string right tackle, so they are al- ready tapping into Tom’s ability to plug into the line anywhere.

The three-time member of the ACC All-Academic Team had shown off his professional talent since his junior year, but one game in particular in 2021 sealed it for scouts. During a contest with Florida State in September, Tom did not allow a single pressure against defensive end Jermaine Johnson through 51 pass-blocking snaps. Johnson, who was drafted in the first round this year, had to switch sides after halftime, presumably because he had given Tom enough tape for game highlights in just two quarters.

Two rounds after Tom’s selection, cornerback Ja’Sir Taylor’s name was called on by the Los Angeles Chargers with the 214th pick. Taylor notched an impressive record while at Wake Forest: the most games played by a player with 62 appearances in his five sea- sons. The Chargers thus snag a tough player whose resume reads pure endurance, which is enticing in any professional league where availability is crucial.

Few casual fans would expect the Chargers to look for defensive backs when they flaunt high-caliber players such as J.C. Jackson, Derwin James Jr., and Asante Samuel Jr. While their top backs are a difficult group to breach, Taylor poses as a swift-footed depth piece as his 4.39 40 time and agility drill performances impressed scouts.

Taylor’s skillset also finds him as a rising kick returner candidate for the Chargers, as the team’s current depth chart lists him as second string for the position. This comes naturally for the former Demon Deacon, since in the season opener versus Old Dominion last year, he returned a kick 99 yards for a touchdown. When he snatched an interception in the same game, one of six in his collegiate career, Taylor became the first Wake Forest player to secure both an interception and a kick return score in the same game.

If being a fellow Demon Deacon wasn’t enough of a reason to root for a player’s career, how about those undrafted players that have fought their way onto the 53-man roster? Linebacker Luiji Vilain fits this description. While his name was not called in the 2022 NFL Draft, after four years at the University of Michigan, Villain was drafted in the third round of the 2021 Canadian Football League. Despite being from Ottawa, Ontario, Villain decided to forfeit his spot in the CFL and play for Wake Forest as a graduate student last year. He preceded to lead the Demon Deacons in sacks with nine.

In May of this year, the Minnesota Vikings realized the league had skipped over a resilient and talented player in Vilain and signed him onto the team, where he now holds the third-string job as outside linebacker.

Villain immediately began impressing in the preseason. Wearing #43, he earned an interception in the endzone against the Denver Broncos. Then, true to his passion for generating turnovers in the endzone, Vilain recovered a fumble while the San Francisco 49ers were trying to run in the ball at the one-yard line a week later.

Luiji Vilain wasn’t the only undrafted Demon Deacon to make a final roster this offseason. In 2021, outside linebacker Luke Masterson served as a formidable force within Wake Forest’s defense. Totaling 85 tackles that season, Masterson came into his own after moving around the defense in years prior, trying out the safety and rover positions before his standout year at linebacker.

After an off-season of turning heads in training camp in Las Vegas, the Raiders added Masterson to the final roster. The linebacker group for the Raiders desperately requires a young talent that can cover, and Masterson provides just that as the current second strong outside linebacker. 29-year-old Raiders linebacker Denzel Perryman has proven himself as a vocal leader, and under his mentorship, reigning Hula Bowl Defensive MVP Masterson is primed to learn and grow into a reliable professional football player.

While enjoying the unrolling of the 2022-2023 NFL season, be sure to keep an eye on these four Demon Deacons who served as vital parts of our sensational season last year. They have secured the opportunity not many college players reach to support them in their ongoing careers.