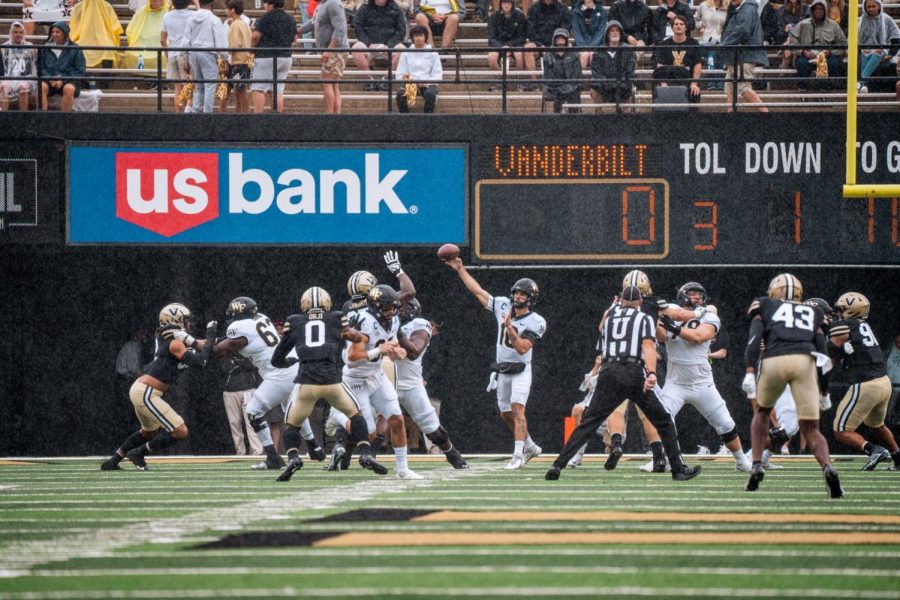 Wake Forest took care of business on the road Saturday with a dominant 45-25 win over Vanderbilt and is now ranked No. 19 in the AP Poll.

The return of redshirt junior Sam Hartman was the storyline of this game. He threw for 300 yards and four touchdowns.

Hartman was slow to get going early on, with the offense posting a three-and-out on their first drive. The Demon Deacons got going on the next drive with Hartman completing two passes for 21 yards and scrambling out of the pocket on several occasions. Wake Forest made it down to the Commodores’ one-yard line but was stopped at the goal line and turned the ball over on downs. Yet, the defense helped Wake Forest find their momentum when redshirt senior Coby Davis recorded a 31-yard pick-six to put the Demon Deacons on the board. On the other end, Hartman proved that he was truly back when he connected with one of his favorite targets A.T. Perry for a 68-yard touchdown across the middle of the field to put Wake Forest up 14-3 after one quarter.

The Wake Forest defense continued to put the pressure on Vanderbilt’s offense in the second quarter. A fumble by Commodores QB Mike Wright was picked up by DB Chelen Garnes and three plays later Hartman connected with Christian Turner for the score. After last week’s numerous holding penalties, sloppy play continued to follow the Demon Deacons when Taylor Morin muffed a punt, setting up Vanderbilt in the red zone. The Commodores were able to capitalize on the mistake and cut into the lead. Wake Forest led by 11 going into the locker room at halftime.

Hartman and the offense continued to find their groove early in the second half as the Demon Deacons opened with a 75-yard drive. Hartman found Perry again, this time for 49 yards, and Morin finished off the drive with a nine-yard touchdown catch. The two teams traded possessions with punts, and the Wake Forest defense came up big again with another turnover. Defensive lineman Kobie Turner recovered a fumble right in Vanderbilt territory for the Demon Deacons’ third forced turnover on the day.

This defense has continued to show improvement, and this effort will help to balance the team’s success on both sides of the ball. Hartman was again able to capitalize on the Vanderbilt miscue, finding tight end Cameron Hite for his fourth passing touchdown of the game. The Demon Deacons continued to pile it on when running back Quinton Cooley rushed 24 yards past Vanderbilt defenders into the end zone. Wake Forest finished on top 45-25.

The return of redshirt junior Sam Hartman was the storyline of this game. He threw for 300 yards and four touchdowns.

Clawson was pleased with his team’s performance.

“The positives were that we won the turnover margin, we were a little better in the red zone and our defense defended the quarterback run well.”

Wake Forest put out a great performance against an SEC opponent, and steady play on both sides of the ball bodes well for the rest of the season. The Demon Deacons return home to Truist Field on Sat., Sept. 17 to face off against the undefeated Liberty Flames in the Homecoming Game.