As Serena Williams retires, many reflect on her legacy

The tennis star is renowned as the Greatest of All Time 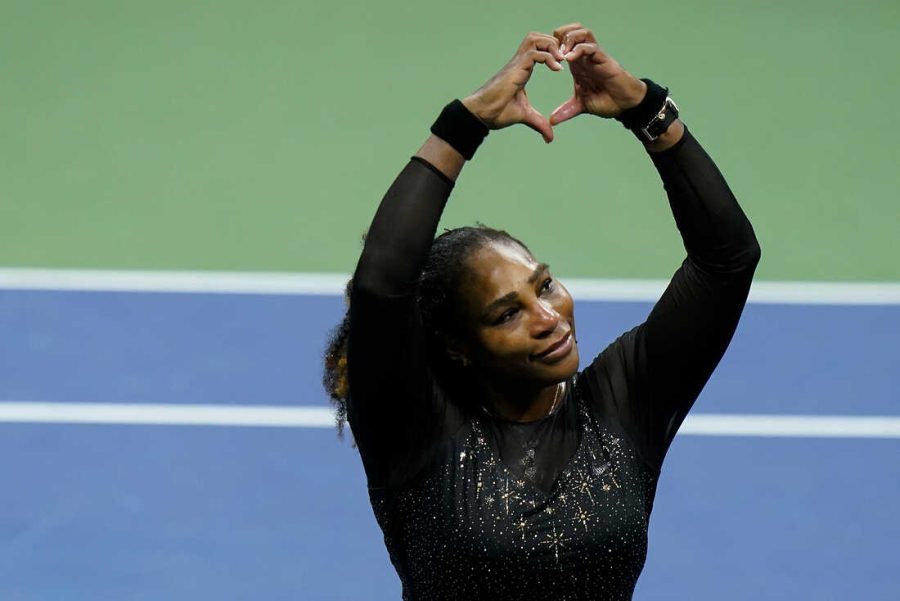 Courtesy of the Associated Press

Serena Williams gives her love to the Arthur Ashe faithful after her final professional tennis match.

Serena Williams announced her retirement through her “Vogue” cover story that was released this summer on Aug. 9.

“I have never liked the word retirement,” she explained in the article, “Maybe the best word to describe what I’m up to is evolution. I’m here to tell you that I’m evolving away from tennis, toward other things that are important to me.”

Williams described that she is changing her focus from tennis to expanding her family and her business. She currently has one child, her five-year-old daughter Alexis, with her husband, Alexis Ohanian. Ohanian is an American entrepreneur and investor who co-founded Reddit. Williams’ business is a venture capitalist firm, Serena Ventures, which invests early on in companies mainly run by “women and people of color” according to Business Insider.

Williams turns 41 in a little over two weeks, and in her 26-year tennis career, she has accomplished more than any athlete could hope for. With 23 Grand Slam titles, four Olympic gold medals, 73 singles titles, and $94 million in winnings, she has more titles to her name than most tennis players. She announced that she would be retiring after the U.S. Open, which just concluded. Her last match broke yet another world record; with 4.8 million viewers turning into her third-round matchup against Australia’s Ajla Tomljanović, it was the most-watched tennis match on ESPN. The match was a little over three hours long and ended 7-5, 6-7, 6-1 in Tomljanović’s favor. Williams had eleven aces during the match.

When Serena Williams announced her retirement in early August, she stated that she has never been good at goodbyes. However, she also claimed that she would never want to be pregnant as an athlete again. Thus, she was forced to choose between continuing her tennis career or pursuing her hopes for her family and business. Serena also included in the “Vogue” issue that after seeing a doctor, she and her husband can continue growing their family. Williams expressed her jealousy for male athletes because they can continue playing their sport while simultaneously growing their families. She even mentions her envy of 45-year-old football player Tom Brady, who has been able to continue his athletic career while expanding his family because his wife Gisele is at home enduring the physical labor.

In addition to labor from pregnancy, Williams was forced to take a year off from tennis due to tearing her hamstring in the first round of Wimbledon in 2021. Many people wondered if Williams would retire after this injury, however, she describes in her “Vogue” issue that Tiger Woods was a great inspiration to her during her injury. Woods helped her realize that if she could commit to physical therapy, she would be able to perform like she used to if she still wished to. Serena announced that she was unable to play in the Australian Open but fortunately returned to tennis for Wimbledon in June.

Although Williams had ended her tennis career, she has not only transformed the sport but completely transformed the way the sports entertainment industry views female athletes in general. Many female icons, like former First Lady Michelle Obama, describe Williams to be the ideal female role model for women. She is determined, resilient, competitive, yet humble. Serena and her sister, Venus, created a legacy for not only African American female tennis players, but all female athletes and for those who come from low socioeconomic statuses. Not many would argue with the statement that Serena Williams is the best tennis player to exist.

Williams may have retired from professional tennis, but her era will never end. Coco Gauff, an 18-year-old tennis player, has been labeled “the next Serena”. Even though this is an immense title to place on Gauff, she explains that Serena Williams was her inspiration to pursue tennis because. Gauff saw Serena Williams succeed incredibly and believed “she could dominate, too”.