Men’s soccer, now No. 4 in the nation, is dominating the field

Wake Men's soccer team is on a winning streak and continues to climb up the national rankings. 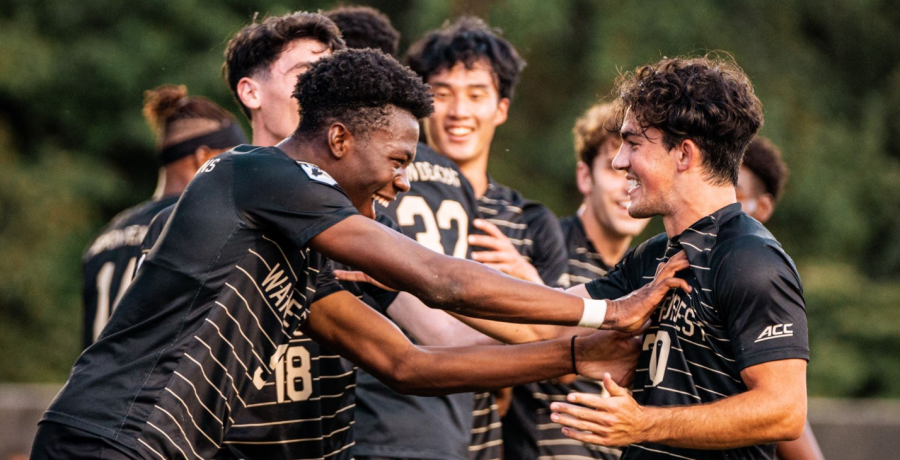 The men's soccer team is now ranked No. 4 in the nation.

The men’s soccer team is now ranked No. 4 in the nation, and the Demon Deacons’ last two matches showed why they deserve to be so close to the top. . Men’s soccer secured two impressive wins to bring their overall record to 5-0, and the latter match versus NC State gave Wake Forest its first notch in the win column for ACC play.

The clean sheet against the Wolfpack served as the first game the Demon Deacons have played within the conference. On Friday, Sept. 16, the team will travel to Blacksburg, Virginia to clash with Virginia Tech in the next match on ACC green.

Before the win against NC State, the Deacons welcomed Winthrop to Spry Stadium on Sept. 6 and hardly faltered. They totaled five goals in the win, of which four were celebrated in the first half. The teams had not faced each other since 2011, and the Eagles caught Wake Forest in the middle of a hot streak. The Demon Deacons have collected nine straight wins at Spry, dating back to last season. By the end of Tuesday night, Winthrop fell victim to this streak as the home-field advantage now boasts ten straight successful matches for the Deacons.

The barrage of scores for Wake Forest began in the 11th minute, when junior defender Hosei Kijima accelerated an attacking opportunity for the Deacons by firing a lead pass to midfielder Colin Thomas within the six-yard box. Thomas tipped it forward to sophomore Roald Mitchell, whose awareness allowed an easy chip into the net for the first goal of the night.

Though his first goal of the season, Mitchell only had to wait until the 19th minute to strike again. Freshman Cooper Flax intercepted a pass out from Winthrop’s goalkeeper and fed the ball to Mitchell, who once again appeared at the goal right when he needed to be. He cashed in for a second score, which came just two minutes after he assisted Kijima on a breakout counter attack.

It seemed once Mitchell found the net for the first time this season, he couldn’t help but come back for more. He also boomed a penalty kick over the keeper’s head in the final minutes.

The forward from Montclair, New Jersey thus got to bookend the game with two of his goals; he came intoTuesday leading Wake Forest in shots.

Throughout the night, Winthrop had difficulty earning their own shots. The Demon Deacons beat them 31-5 in this aspect, most likely a result of Wake Forest doubling the Eagles’ possession time. Wake Forest’s defense proved inpenetrable in the first half.

This was true on all levels of the field, but Winthrop’s struggles to break into the attacking third were most noticeable moving up the sidelines. In the first half, sophomores Colin Thomas and Cristian Escribano repelled any movement up their side with physical defense that persisted through the first 45 minutes. Defender Escribano’s pressure was certainly felt when he generated the turnover that had led to Hosei Kijima’s score in the 17th minute.

For the Demon Deacons’ fourth goal of the first half, sophomore Julian Kennedy joined Mitchell in finding his first score of the season. While it came in the 37th minute, Wake Forest had been on an unrelenting attack for the prior eight minutes. Freshman defender Samuel Jones ignited the opportunity by bisecting the field with a sharp pass to transfer junior Sidney Paris, who collaborated with midfielder Leo Guarino on an assist that Kennedy propelled into the top right corner.

The four scores of the first half, combined with Roald Mitchell’s penalty kick to topple Winthrop 5-1 by the end of the match.

Wake Forest’s ACC opener against the NC State Wolfpack six days later brought the excitement every conference game should and then some.

The Big Four match on Saturday night began with a spark, as the Wolfpack’s Alex Bautista received a red card in the 15th minute for committing a foul in the box. To tally his fourth goal of the week, forward Roald Mitchell sank a penalty kick into the top right corner. With NC State down to ten players on the field, the new 1-0 lead for the Deacons sent the Spry faithful  into a frenzy.

While the two teams traded attacks in a first half of even possession times, Wake Forest saw their next opportunity appear when junior Jahlene Forbes launched an on-target free kick. Attendees on Alumni Hill held their breath, but the Wolfpack’s goalkeeper was able to snatch up the shot.

The defensive tenacity seemed to shift up a gear for the Demon Deacons in the second half, for the play was kept mostly on NC State’s side of the pitch. Wake Forest consistently shut down all counter attacks that came their way, often with junior Garrison Tubbs vocally orchestrating the Deacons’ defense in transition.

Senior David Wrona rotated into the game on a substitution in the 71st minute, and the midfielder from Hoover, Alabama doubled Wake Forest’s lead. Just seven minutes since entering the game, Wrona ripped a shot across the box into the bottom left corner of the goal. With the scoreboard now reading 2-0, he led a celebratory leap over the wall with sophomore Ryan Fessler, who assisted the shot after dancing around three Wolfpack defenders.

Despite the larger lead and on-field advantage from the red card in the first half, the Demon Deacons continued to match all attacks from NC State until the game was completed for a clean sheet.  The 2-0 record marks Wake Forest’s  21st straight victory against NC State.

The team will look to follow up this first ACC win with another strong in-conference performance versus Virginia Tech on Sept. 16. Before they travel for that match, Wake Forest will host Fairleigh Dickinson on Tuesday Sept. 13 to see if they can extend the Spry Stadium win streak to 12.