Participants climbed one step for each of the 2,997 who perished in the 2001 attacks 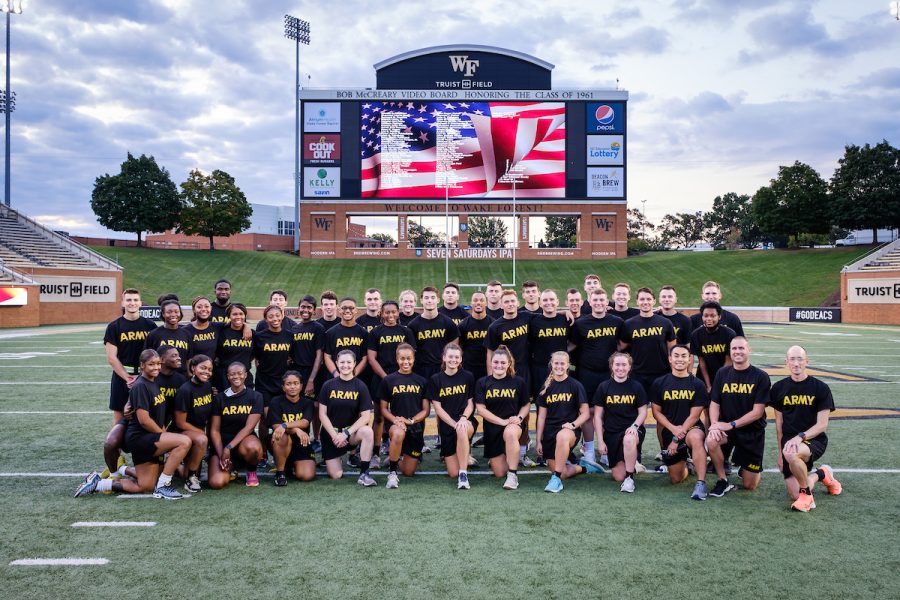 Participants pose during the 2021 iteration of the event.

In honor of the lives lost in the terrorist attacks on Sept. 11, 2001, hundreds of people from Wake Forest and the Winston-Salem community gathered on Truist Field on Sept. 10 to climb 2,997 steps — one step for each person who died due to the attacks.

Each year, students and faculty from Wake Forest University and Winston-Salem State University (WSSU), joined by Wake Forest ROTC, local police officers, firefighters and military personnel, participate in the stair climbing, which is hosted by the “No Fear” Battalion, an army ROTC program for Wake Forest and WSSU cadets.

This was senior ROTC cadet Camden Walrath’s last year participating in the event, which made every moment on the steps especially worthwhile to him.

“Everyone is here doing this because they care,” Walrath said. “I liked to have the whole stadium packed at some point, to honor those who sacrificed themselves. It means a lot to me.”

For Walrath, it is the family legacy that deeply connects him with what happened 21 years ago.

“My family has a lot of extensive military service, both my parents and my grandfather,” Walrath said. “My grandfather was in the Air Force. When he got out [of the military], he worked for American Airlines, and his route was one of the routes that would fly from New York.”

He continued: “He retired about a month or two before 9/11 happened, but if he hadn’t retired, that would have been his plane. So that’s why I want to join the army and serve. For me, this is a day that a lot of regular people who weren’t in uniform came together to help other people.”

Multiple campus sports organizations and local residents accompanied by their families also attended the event this year, sharing a moment of remembrance and patriotism.

“This year we had nearly 400 people within the Winston-Salem Community attend our event,” Rachel Mandzak, professor of military science at Wake Forest, said. “I feel the event was a great success! I hope that we continue in tradition to educate and commemorate lives lost during the 9/11 attack on our country.”

Junior Anna Brooker, a Wake Forest ROTC cadet, helped set up the event about a week ago. She and other members of Wake Forest ROTC came to the field early, counted each step and calculated how the steps can be divided evenly into laps to make it convenient for participants to track their steps. Brooker was pleased by the turnout of the event.

“I’ve seen students that I know from school that I didn’t think would be here,” said Brooker, “It is a great way for lots of local communities all around the United States to come together.”

Around 6:40 a.m., more people poured into the stadium, wearing t-shirts with patterns of American flags and other national symbols. Many young children were also there, climbing alongside their parents.

Angel Serafini, a genetic counseling graduate student from Wake Forest, was delighted to see young people participating, as she believed it is important for children to experience the remembrance event firsthand.

“When I was in eighth grade, they turned on the TV, and the attack was happening,” Serafini said. “I remember what that day was like, but for kids who are learning about it in class, the memory has been passed out, like one small ripple effect, but it impacts our day. We are implementing people in our little circles that continue to influence.”

“We stand together to defend and support our country,” Mandzak said. “Passing this tradition down allows us to remember that we are stronger together and undefeated.”