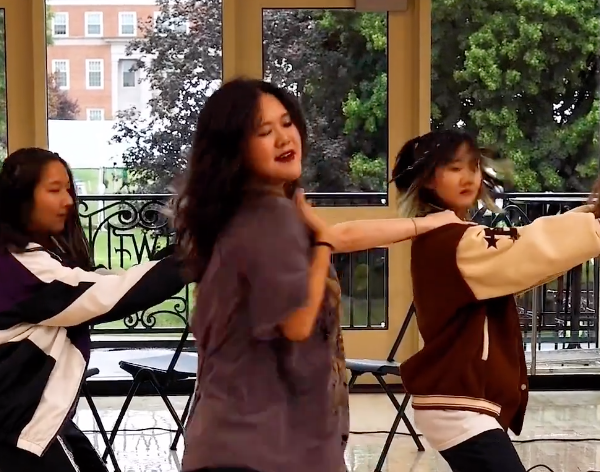 The festival featured multiple performances, including song and dance.

Harvest Moon — the full moon that emerges around September — is culturally significant in Asian countries including China, Japan, Vietnam and Korea as it marks the reaping of crops, family reunions and good fortune.

“It is a day where families and friends gather together, share lots of good food, tell lots of legends, light lanterns and celebrate the harvest and a beautiful, beautiful moon,” junior and ASIA spokesperson Maggie Zhang said. “People from countries other than Asia can also get a glimpse of the beautiful and joyful culture here.”

Zhang helped create posters for the event, managed ASIA’s social media accounts and advertised the festival to the Chinese student community. She spoke about how Harvest Moon could render a sense of belonging for international students on campus.

“We are holding one of our biggest yearly events to provide a small remnant of what home is for those who are away from home,” Zhang said. “This event hopefully will serve as a bridge to our reminiscent, imaginative version of home.”

After brief introductions and holiday cheers from the ASIA executive team, volunteers began serving a feast of Chinese, Japanese, Vietnamese, Korean, and Thai foods. The scent of chow mein, sushi and dumplings saturated the air.

Mooncake, a traditional Chinese pastry eaten during the Harvest Moon Festival, was a popular choice. When it was served, many people rushed up to the stage to grab packs of them.

“The popularity and smell of a mooncake reminded me of the taste of home and chit-chatting with friends,” Zhang said.

Besides appetizing food, promoting cultural exchange and recognition is also an important goal that the organizers hope to achieve through the event.

“I’m in Greek life, and I am also half Indian, and I understand Wake Forest can be very isolated,” Doran said. “A lot of people are asking how to get involved, so I like to reach out to the freshmen and invite them to come to our event because some people just don’t know that it’s there. ”

“In my role as a president, I work with ASIA and other organizations throughout the year,” Khemlani said. “They come to our events, and they support us all the time. It is always good to be involved, see what’s happening, what’s being done right and learn from it. ”

The festive mood peaked as members of Lost in Translation (L.I.T) Dance Team presented their featured K-pop dance. The audience also enjoyed other performances such as the Chinese Ensemble and a solo performance from senior Boxi Chen. After the performances, came more thrilling activities like a spicy ramen-eating contest and musical chairs games.

“My favorite part of this event was the musical performance,” junior Jennifer Benavides said. “It ties to my interest in music, and it is also cool to see what traditional music is like in Asia.”

While cultural events are rarely under the spotlight in Predominantly White Institutions (PWIs) like Wake Forest, Benavides believes promoting and attending Harvest Moon and other similar events would enhance diversity and inclusion among students.

“I think the event has a great impact on the diversity topic as well as education,” Benavides said. “It shows us we all have different backgrounds, and we get to learn a little bit more about others.”