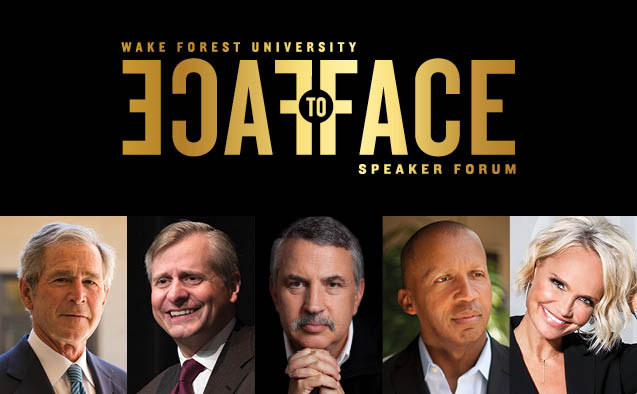 George Bush was the first of many speakers lined up for the 2022-2023 season.

On Sept. 14, George W. Bush, the 43rd President of the United States, reflected on his life and presidency at the Lawrence Joel Veterans Memorial Coliseum, kicking off the second season of Face-to-Face Speaker Forum at Wake Forest University.

Students were excited by the rare opportunity to see a former president speak.

“I knew it was an opportunity that I probably won’t get that many times in my life — to see a former or current president speaking. So I wanted to take advantage of it while I could,” freshman Nick Stiltner said.

During the conversation, Bush and Meacham discussed the major events of his presidency, particularly his work in national security and foreign relations.

The former president recounted his visit to Ground Zero 21 years ago this week. Bush recalled speaking in front of a grieving nation, saying, “God is good. God will hear our prayers, and we’re going to kick their ass.”

Bush remained true to this promise by declaring war on terrorism shortly after and deploying troops to Afghanistan. Facing significant pushback for this decision, Bush justified his work, saying, “presidents shouldn’t make decisions based on politics, but what’s best for the country.”

Bush’s decision to go to war was based on his belief that “the condition elsewhere matters to our own security.” Bush expressed how this same mindset was evident in his humanitarian efforts as well.

Not every student was thrilled with Bush’s message though. Junior Hasan Pyarali voiced his displeasure with Bush’s invitation to campus.

“I think bringing him to Wake Forest and [Bush] justifying the war in Iraq was an attack on every student at Wake Forest, especially Muslim students,” Pyarali said. “The [Allegacy Center for] Leadership and Character bringing him here showed us exactly what character is not. Whoever organized this event should resign.”

Executive Director of Face to Face Sue Henderson, however, noted the program’s mission is to bring in influential speakers.

“Our primary mission is to bring world-class speakers to Wake Forest and to the greater Winston-Salem community on an annual basis,” Sue said. ‘Bringing President Bush in conversation with Jon Meacham far exceeds expectations.”

Meacham and Bush also discussed PEPFAR, Bush’s initiative to provide increased access to HIV/AIDS treatment and prevention methods. He shared about a trip to Rwanda with his wife that served as the inspiration for the initiative that saved 20 million lives.

Bush communicated the importance of his faith during his presidency. He credited Billy Graham for his conversion to Christianity and shared that he continues to read his Bible every morning. However, he does not believe a president should be “preacher-in-chief,” so he made an effort to respect and value all religious beliefs during his presidency and the forum, especially after the 9/11 terrorist attacks sparked bigotry against Muslims.

Bush closed with a message to our nation’s future presidents.

“The office of president is more than you,” Bush said. “The job of the president is not only to make tough decisions, but to bring honor and dignity to the office so that the institution survives future presidents.”

Sophomore Jacquelinne Marroquin arrived at the event with a neutral opinion of Bush but was eager to hear him speak.

“I think it was very moving,” Marroquin said. “I feel like he put a lot of his personal life out there and things that I just didn’t know, and I feel like other people didn’t know.”