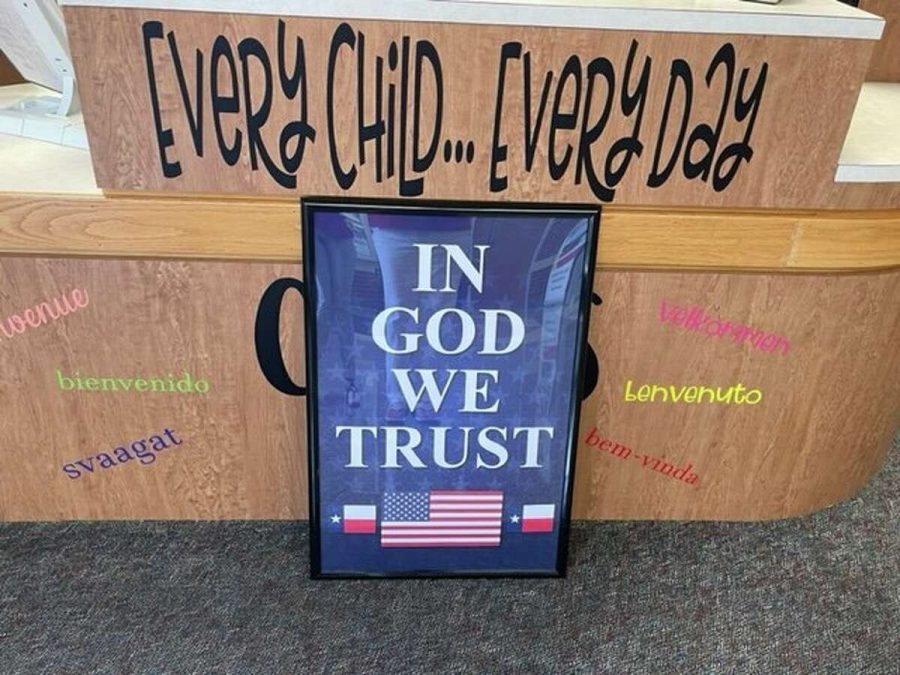 A new Texas law requires schools to hang any "In God We Trust" signs that are donated.

In 2022, the Supreme Court revisited the centuries-old issue of religious freedom in the United States. In June, the Supreme Court ruled 6-3 that the government may not suppress an individual from engaging in personal religious observance in Kennedy v. Bremerton School District.  In the case, Christian football coach Joseph Kennedy sued the Bremerton School District for suspending him after he led numerous

post-game prayers on the 50-yard line. In a majority opinion supporting Kennedy, Justice Neil Gorsuch asserted that teachers and students do not shed their constitutional right to religious freedom at the schoolhouse gate, but they are paid to speak on the government’s behalf to convey its intended message. Specifically, Gorsuch declared that such religious freedom does not justify teacher-led prayers in schools or religious representations and symbols in schools.

In the past few months, religious freedom has once again come to the forefront of popular discourse in the United States. A recent Texas law, Senate Bill 797 (S.B. 797), mandates that donated displays reading “In God We Trust” be hung in classrooms. Given both the recent legal precedent and historical legal precedent, such an overtly Christian symbol is a violation of the Establishment Clause of the First Amendment and a gross representation of Christian nationalism in public schools.

The Establishment Clause, which applies to individual states under the 14th Amendment, prohibits the government from making any law respecting an establishment of religion. Such prohibition of government endorsements of religion extends to beginning school days with prayers or moments of silence [as decided in Engel v. Vitale (1962) and Wallace v. Jaffree (1985)], hanging the Ten Commandments in classrooms [Stone v. Graham (1980)] and daily classroom exercises involving readings from the Bible (School District of Abington Township, Pennsylvania v. Schempp (1963)). In the case of S.B. 797 mandating donated displays of “In God We Trust” signs, the government of Texas is explicitly endorsing religion. Bryan Hughes, the Texas State Senator who framed the bill, promoted the mandate by declaring that it “asserts our collective trust in a sovereign God.” However, the role of a secular state such as the United States is not to assert any collective belief, since all beliefs are held valid under the freedom of speech and freedom of religion clauses in the First Amendment. Furthermore, it is not the role of a state government to explicitly promote such religious assertions within a public institution — especially in schools, where education has a major role in an individual’s choices. The United States government and state governments should play no role in an individual’s choice of religion. This is the imperative principle that our country is founded upon — separation of church and state.

In addition to violating the Establishment Clause of the Constitution, the Texas mandate exhibits the dangerous influence of Christian nationalism on Texas’ government. Promoters of the Texas bill have justified the mandate by citing the importance of the motto’s historical roots. The motto “In God We Trust” can be traced back to the Civil War, where clergyman M.R. Watkins used this motto to rally support amongst soldiers, promoting the idea that the United States was under divine protection. Since the Civil War, however, this motto has been used to promote Christian nationalism — the belief that Christianity should enjoy a privileged position in the public square. Though the majority of U.S. residents are Christians, the United States is made up of a diversity of religions and is a country of cultural pluralism. Giving Christianity a privileged position opens the door to the intervention of Christianity in the law and its use to suppress other religions. The problem with S.B. 797 lies within the idea that it promotes Christianity, while suppressing other religions. According to the Pew Research Center, as of 2021, a staggering 77% of Texans are Christian. The Texas mandate for signs reading “In God We Trust” is not meant to represent Muslim or Jewish or Hindu faiths — this belief and trust in a sovereign and divine God is not an American belief, but rather a Christian one. S.B. 797 is an explicit representation of the Christian faith sponsored by the government that isolates and suppresses minority religions within schools. Such a promotion of Christian beliefs in government is a threat to American diversity and cultural pluralism.

The United States and state governments have a duty to protect the existence of all religions and not promote one over another regardless of its dominance or popularity. This fundamental principle has, arguably, made America a beacon of light in the world, representing freedom and respect for all. However, in Christian-dominated states such as Texas, religious minorities experience discrimination and oppression more often. According to the Council on American-Islamic Relations, 48% of Muslim students in the Dallas-Fort Worth area are bullied due to their faith — significantly higher than the national average of 22 percent. While “In God We Trust” signs do not explicitly promote this type of bullying, they have been weaponized as a tool of religious discrimination. The Senate law states that if a sign reading “In God We Trust” is donated to a school, it must be hung in the classroom. Most signs in North Texas were donated by Christian phone company Patriot Mobile in an effort to “glorify God.” Other donations from parents included a sign with the motto written in Arabic, as well as a sign displaying the motto in rainbow colors as a symbol of support for the LGBTQ+ community. However, these signs were not hung, in spite of the mandate’s requirements. S.B. 797 is not an effort to have divine protection over the classroom. If it were, signs respecting Islam or the LGBTQ+ community would be hung — all signs regarding divine protection would be hung. But it is an exclusive right for Christianity. It is an exclusive privilege for English-written, Christian “In God We Trust ” signs to be hung in the public sphere rather than those of other religions. It is an endorsement of Christian nationalism by the Texas government. It is an endorsement to isolate and suppress minority religions. It is a threat to our democracy.