For the 26th year in a row, U.S. News & World Report ranks Wake Forest one of the top 30 universities nationwide 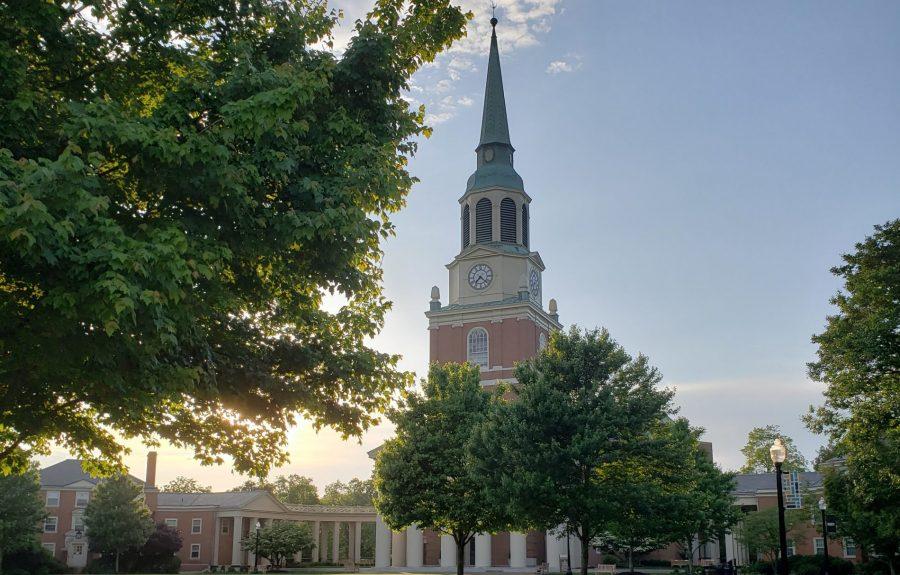 Wake Forest fell one ranking from last year's ranking of 28.

U.S. News & World Report released their 2022-2023 Best National University Rankings on Sept. 11, and Wake Forest ranked 29th, placing them in the top 30 national universities for the 26th year in a row.

The ranking also lists Wake Forest as 21st in best undergraduate teaching and 23rd in best value school, a combination of academic quality and affordability.

“Rankings can serve as a starting point for many students and their families as they consider their options for college,” said Tony Marsh, interim dean of the college. “Wake Forest’s performance over time has been remarkable and is in part, a testament to its nationally recognized reputation in undergraduate teaching and student engagement.”

Marsh is especially proud of the Wake Forest faculty’s dedication to undergraduate education and world-class research.

“While the liberal arts are at the core of our curriculum, students also have opportunities to engage in experiential learning where knowledge gained in the classroom is applied in a wide variety of real-world settings from the lab to the community,” Marsh said.

Wake Forest’s faculty resources contribute to its persistent status in ranking. 56.8% of classes at Wake Forest have fewer than 20 students and the 11:1 student-faculty ratio is one of the lowest among all top 30 schools. Those indicators underscore a highly interactive learning environment and a student-focused classroom.

Students appreciate how the ranking reflects the faculty’s passion and caring for teaching.

“For the past four weeks, I’ve gotten the idea that education is critical here and held to very high standards,” said freshman Kate Wanzenberg, who intends to major in psychology.

“Especially with all the professors, I feel like they make the college [ranking] higher because they always push students to be better,” Jones said.

While ranking can be a convenient reference for navigating through hundreds of universities for high school students, measuring the academic excellence of an institution based on voluntarily submitted data can be problematic. Many qualitative components that make up a good college cannot translate into numbers, which are exposed to fraud and maneuvering.  Columbia University, for example, dropped from 2nd to 18th place this year, due to the inaccurate data it reported to US News.

“I feel like Wake Forest is underrated on the rankings because its liberal arts education, small class size, and passionate professors should play a bigger part,” said freshman Jane Bostick, who intends to major in accounting.

“I don’t think rankings are effective because there are so many different factors that go into it,” Green said. “For example, if you look at the top schools, there is barely any economic diversity, like someone from a low-income household. Even in Wake Forest, there is almost no economic diversity.”

“The ranking can be damaging to one’s dignity if you don’t feel like you end up where you supposed to be,” Green said. “Maybe we should try to cater towards actual fits instead of ranking.”

Aware of the controversies around university ranking, Jed Macosko, professor of physics, is currently working on an alternative ranking system at AcademicInfluence.com that is based on a more straightforward formula and counts up the influence of alumni, professors and administrators.

“I was interested in creating an alternative school ranking system as an application of big data,” Macosko said. “It is based on the factor that is at the very heart of what makes a university great — the people.”

Macosko believes that having more rankings available creates a better environment for high school students and their parents since consulting various lists will help them learn new information about the schools they are considering and will ultimately help them find a good fit.

Marsh also recommends that students value factors outside of metrics provided by rankings like the one published by the U.S. News & World Report.

“Investing time to visit the campus, talking to people that can help you make an informed choice and finding the place that makes you feel comfortable and aligns with your values is critical to finding a university where you can be successful,” Marsh said. “I hope prospective students and their families take the time to visit campus and find out for themselves why Wake Forest is a great university.”