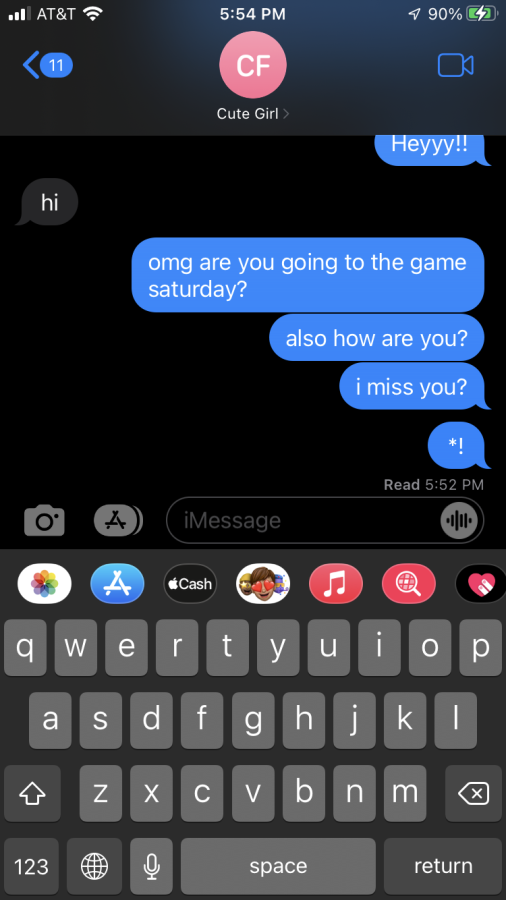 (The contents of the image are staged). When the rules of texting are not followed, you may strike out with a crush.

As a college student in 2022, I felt a moral duty to move away from Snapchat and rely on texting for pursuing romantic interests. I no longer wanted to be that guy sending red, annotated S’s for streaks or that guy trying to spark a conversation with just a picture of his face.

The switch to text should’ve been somewhat relieving. After all, the unspoken conventions of Snapchat are exhausting; knowing how long to leave someone on delivered; the strict. anti-double-snap rules and, of course, the dreadful fear of a Bitmoji staring contest in a message chain. Truthfully, iMessage has been no less stressful. What should be frivolous conversations with romantic interests have become minefields of syntax, diction and style; often requiring teams of expert analysts (such as my suitemates Adam and Ishan) to navigate. In these conversations, I want sprezzatura: to look like I’m not trying, but even more importantly, I want to look like I’m not trying to look like I’m not trying. Through the many conversations I’ve had with women (at least two, but no more than four), I’ve assembled some basic rules of thumb for texting. By the end of reading this, you’ll have no problem bagging that accounting baddie you’ve been trying to talk to all semester.

The opening text is perhaps the most crucial text of all. A fumble here could set the completely wrong tone for the rest of the conversation, or it could even lead to a long-term, ego-crushing “delivered”. For the first text, I like to follow…

The Rule of Twos:

If you plan on using “hi” or “hey”, it is encouraged to send it with two i’s or y’s, leaving you with “Hii” or “Heyy”. One “i” or “y” is also acceptable, but it feigns powerlessness. Three is far too suggestive for the first greeting.

However, the most important part of the Rule of Twos is that the above clauses DO NOT OVERLAP. “Hii !!” is unacceptable. Opt for “Heyy !” or “Hey !!” instead. Keep it enthusiastic without seeming crazy. After all, you need to seem like you have a whole roster of backups ready to go in your contacts, even if you don’t.

I recommend sticking to the more grammatically correct upper-case. All lower-case is dangerously submissive, and it breaks the most important rule of them all: it looks like you’re desperately trying to look like you’re not trying. However, texting is an art, and rules are meant to be broken in art. For example, after careful deliberation, I may send the following text:

In this case, the usage of grammatically incorrect lower-case seems like a casual mistake made out of thoughtlessness, as if this conversation isn’t really that important to me. God forbid that the recipient feels like they matter to you too much!

The Dreaded Gap Between Messages

In iMessage, if messages are sent more than a minute apart, it creates a small gap between the two messages to signify the time difference between the texts. This gap needs to be avoided at all costs. It shows that you’re taking too much time and too much care with your individual texts. Again, the name of the game is casual thoughtlessness. Also, this gap creates a visual rupture in what should be the flow of a well-balanced conversation.

To avoid this, plan every message in advance, so you aren’t left with a one-minute countdown to craft a text once your first is sent.

The Importance of Mirroring

If you take anything away from this article, make sure you take home the lesson of mirroring. After your greeting text is sent, pay close attention to the way that your romantic interest texts — their word choice, their punctuation style and if they’re prone to send multiple bubbles or just one large paragraph. Whatever they do, follow it to a “t”. Even if it means breaking the rules I’ve set out, the conventions that you’ve followed for years or even your own deepest moral boundaries, you cannot just be yourself. You must abandon your own identity for the sake of the harmony of the conversation.