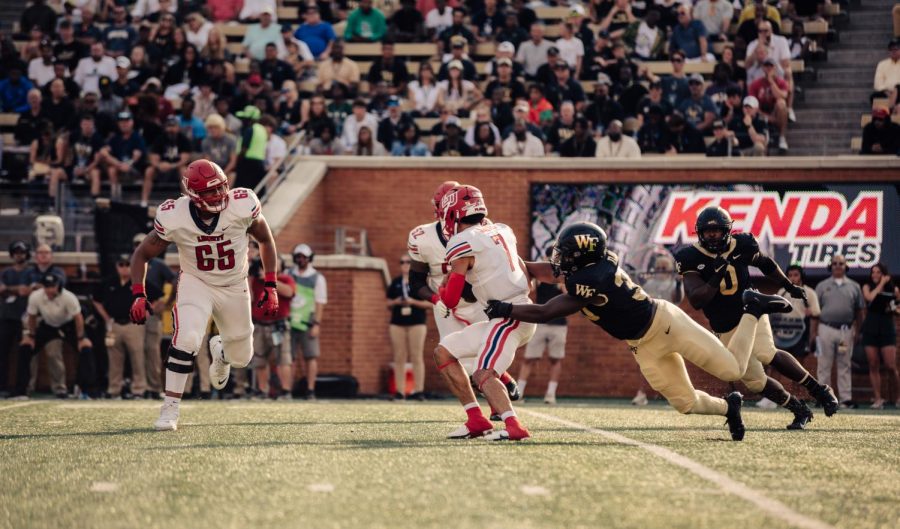 Wake Forest got the job done against Liberty, but it was not pretty. The Demon Deacon defense made a game-saving stop on a last-minute, two-point conversion attempt.

It was a night of milestones though as QB Sam Hartman broke the school record for passing yards, and Wake Forest edged out Liberty 37-36 to continue their winning streak.

Hartman and the offense put points on the board during their first series but were forced to settle for the field goal after coming up short in the red zone. Penalties continued to be a problem for the Demon Deacons, as they extended drives for Liberty and ended drives for their own offense.

Taylor Morin redeemed himself from his muffed punt last week, returning a punt 38 yards to set the offense up perfectly for their offensive drive at the 30-yard line. Jahmal Banks hauled in the touchdown pass from Hartman, making a great play on the ball and mossing his opponent.

As the saying goes “Defense wins championships”, and Wake Forest certainly looks to be fulfilling that saying: the defense came up big in the turnover battle. In the second quarter, lineman Rondell Bothroyd made his presence known, sacking the quarterback, and then making a tackle for a loss on back-to-back plays.

The defense got their big play when Isaiah Wingfield came up with the interception. Yet, instead of capitalizing on this, Hartman threw a pick on the very next play, his first of the season, to give Liberty the ball back. Liberty was able to capitalize on the error and put their first points on the board thanks to a field goal. As the game progressed,

Hartman began to find his groove; he found Ke’shawn Williams across the middle of the field for a 46-yard gain.  But despite the big play, the offense once again came up short in the red zone and could not get the job done and had to settle for a field goal yet again.

Wake Forest’s defense came up big yet again with another interception, this time it was Chelen Garnes who made an excellent catch along the right sideline. Despite the turnover, the offense was pinned back towards their own endzone at the 5 yd line. Hartman looked really uncomfortable in this series and couldn’t get anything going as the offense went three and out. On 4th Down, Ivan Mora lined up in the endzone to punt the ball away, only to be blocked by Liberty towards the back of the end zone resulting in a safety, a special teams nightmare for the Demon Deacons.

Liberty regained possession after the safety and turned the ball over yet again Chase Jones came up with the tipped pass. Donavon Greene got involved on the next offensive series, hauling in a 41-yard pass from Hartman to set up the offense inside the ten. Hartman found tight end Blake Whiteheart for an eight-yard score as Wake Forest found their footing after a wacky series of offensive and defensive stints. The defense was sluggish in the dying embers of the first half, as Liberty QB Kaidon Salter made a play with his legs to set up an easy chip shot. Wake Forest led 20-8 going into the locker room.

Sam Hartman entered the history books with his first completion of the second half, as he became the school leader in career passing yards. Despite the celebration, Liberty would not go away easily. Salter scrambled out of the pocket and ran 47 yards for a touchdown to put Liberty right back into the game. The offense came out flat in the second half, and stalled on its first two drives, opening the door for Liberty. Liberty running back Dae Dae Hunter made quick work of the Wake Forest defense, running 43 yards up the middle for the score to give Liberty their first lead of the game.

Hartman and the offense could not get anything going, and the run game was lacking throughout much of the game. Late in the third quarter, Quinton Cooley started the ground game, only to have his gain called back for holding. On the very next play, Wake Forest had a false start, and after back-to-back penalties, Hartman overthrew Whiteheart and was picked off for the second time that night.

The story of the second half was extremely sloppy play, and with Liberty capitalizing on turnovers, Wake Forest was on the ropes. The offense made a push late in the third but once again a holding penalty backed them up. Hartman found A.T. Perry on the left sideline inside the 10-yard line, only for the play to be called back because Perry stepped out of bounds. The Demon Deacons had to yet again settle for a field goal, but kicker Matthew Dennis bailed them out drilling a 46-yard field goal to tie the game up at 23.

The Wake Forest defense came up big again to open the fourth quarter. Malik Mustapha sacked Salter who fumbled the ball, it was then recovered by Ryan Smenda who almost converted the scoop and score before getting stopped at the three-yard line. Banks scored his second touchdown of the day, which breathed some life back into the homecoming crowd as Wake Forest retook the lead, but Liberty would not go away that easy. On 4th and 7, Salter scrambled out of the pocket and found his receiver Douglas for a 38-yard touchdown to tie the game.

Hartman made strong throws on the next drive to answer. Ke’Shawn Williams had 75 yards receiving on this drive alone, and running back Justice Ellison punched it in the endzone with a 1-yard touchdown run. With a chance to answer, Liberty scored on one of the wackiest plays from the weekend of college football. Salter heaved the ball into the endzone on 4th down, and it looked like it would be another easy interception for Wake Forest —- only Liberty receiver Demario Douglas ripped the ball out and stole the pick to score the touchdown. Truist Field fell silent as Liberty’s offense remained on the field to go for the two-point try with a minute left.

Liberty went with the double reverse trick play and were stopped by the Wake Forest defense in their final stand. Wake Forest came out with the win, but there are definitely things to iron out come next week.

“It’s hard to win. It’s very hard to win. That was a gritty, four-quarter team win. There’s about four-or-five plays today that if we don’t make one of them, we don’t win the game,” said Head Coach Dave Clawson. “I’m glad we won. I think we get a lot more from this than if we won 40-20. You have to have games like this to develop as a team.”

The defense was a silver lining in this game and Ryan Smenda had this to add during the post-game presser:

“A team with some hype got humbled.”

While Wake Forest narrowly escaped with the win, many things will need to be improved upon before next week. Wake Forest hosts No. 4. Clemson in its ACC opener at 12 p.m. on Saturday.