The push for destigmatization of mental health support for athletes 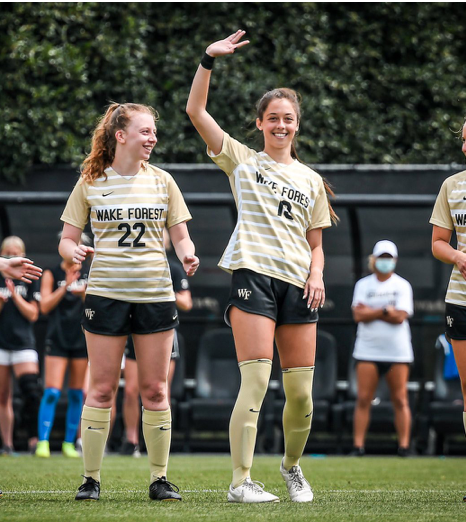 Midfielder Lyndon Wood waves at the crowd during an away game.

On Sept. 6, sports psychologist Dr. Rachel Conway announced the addition of new mental health screening measures to the injury and rehabilitation process within sports medicine. The new initiative aims to reach athletes whose mental health may be at higher risk due to serious, chronic, or repeated injuries, according to Conway.

“We hope that we can help destigmatize mental health even further, make it more part of our rehab process and understand that our mental health is just as important as our physical health when it comes to returning to play,” Conway said.

No one understands the importance of mental health initiatives like this more than senior student-athletes Donavon Greene and Lyndon Wood, who both suffered severe injuries last year.

Starting wide receiver on the football team, Donavon Greene, tore his ACL during an optional summer workout the summer before the 2021 football season. He underwent a reconstruction surgery and almost a year of rehab before being cleared for play on Aug. 1 of this year.

“It’s one of those injuries where you see it happen, obviously in football a lot,” Greene said. “And, you’ll have sympathy for those guys, but you’ll be like, ‘it’s something that’s never gonna happen to you until it happens.’”

Student Athlete Advisory Committee (SACC) President and midfielder on the women’s soccer team, Lyndon Wood, played with severe hip pain during the 2021 soccer season until a postseason doctor’s appointment revealed a full labrum tear, a few torn ligaments, and deteriorated cartilage. An invasive hip surgery left her off the field for ten months of recovery and rehab.

“It sucks,” Wood shared. “And, it’s really hard to think about until you’re actually in that place.”

Both recalled how their injuries took a toll on their mental health:

“I just felt personally like I was on the outside of the team for a long period of time,” Greene said. “Because obviously, you can’t practice and you can’t do lifts with the travel guys.”

“It really sucks to just have to sit there and watch your team train five days a week,” she said. “It’s very easy to brush injured athletes to the side.”

Because sports medicine regulations require post-operation athletes to meet with one of the psychologists, Wood and Greene both met with someone in the department during their rehabilitation process. However, neither found meeting with someone they did not know to be the form of support they needed.

“I know that it does help so many people, but l, just for me as a person, I just didn’t have the foundational relationships with the sports psychiatrists to help me,” Wood said.

One of five injured girls on her team, Wood sought support in her teammates and those closest to her during her recovery process. Although she did not find meeting with a professional psychologist helpful, she acknowledged that all athletes are different and the additional screening for injured athletes may prove useful to check in on athletes who may not seek help by themselves.

“Some people might find it comforting to not have to say [their mental health struggles] face to face to somebody,” Wood said. “I think that [the additional screening] definitely opens new doors that weren’t there before, and it could probably have a positive success rate. I just don’t think it’ll enable everybody to talk because everybody’s so different.”

Conway hopes to reach the athletes Wood is referring to. “Our hope is that it catches any student-athletes that might

be struggling, that maybe wouldn’t have been noticed before,” Conway said. “Because sometimes we could struggle in silence or you know, put on a mask and a face so that others can’t see that we’re struggling.”

An NCAA Student-Athlete well-being study conducted in the fall of 2021 revealed that mental health concerns among student-athletes remain high. The report stated mental exhaustion, anxiety, and depression as specific areas of elevated concern. Concern was highest among women, racial minorities and those identifying on the queer spectrum.

The fast-paced and performance-driven lifestyle of student-athletes brings many stressors and mental health struggles without the addition of a serious or even minor injury. This environment often results in athletes whose identities, self-esteem, and confidence fluctuates depending on their athletic performance and playing time.

“The value of oneself is derived so much from being an athlete in college,” Wood said. “And I think that it’s taken me going through a major injury to like, separate basing my self-value as a whole off of my performance and my playing time.” The new health-screening initiative is just one way the sports psychology department is responding to the increased concern for the mental health of collegiate athletes reported in this study.

Since Conway was brought on as the first full-time sports psychologist in the Wake Forest Athletic Department in 2018, her department has implemented an annual PPE behavioral health screening, pushed for every athlete to attend suicide prevention training, and begun multiple athlete mental health groups. Her office also looks for unique ways to support athletes by bringing therapy dogs on campus and hosting monthly events to discuss various topics in mental health.

In the long run, Conway hopes to expand the sport psychology department by hiring additional clinicians to provide more resources for student-athletes. She hopes that sport psychology can become further integrated into every athletic team’s practices and games as she continues working to destigmatize mental health.

As for Greene and Wood, they are both thrilled to be back on the field with their teams this season.

“It feels great,” Greene said.” During the process of rehabbing you had days like ‘I don’t want to do this,’ and when you get back to [playing], having fun with your teammates again, you just think back on those days [in rehab]. You didn’t want to do it, but you did it. And now you’re here: back at it again.”

Athletic Director John Currie is proud of the way student-athletes and the sports psychology department have stepped up to raise awareness of the importance of mental health and support resources.

“It’s extraordinarily important, and we talk about it every day,” Currie said. “I’m proud of the leadership role that our student athletes have played in their willingness to be public about elevating the importance of mental health. I think we also have to remember that it’s not an issue that’s isolated to student-athletes. Mental health pressure is faced by every student at Wake Forest, and we have to remember that.”