Deshaun Watson's punishment was met with outrage due to its lenience 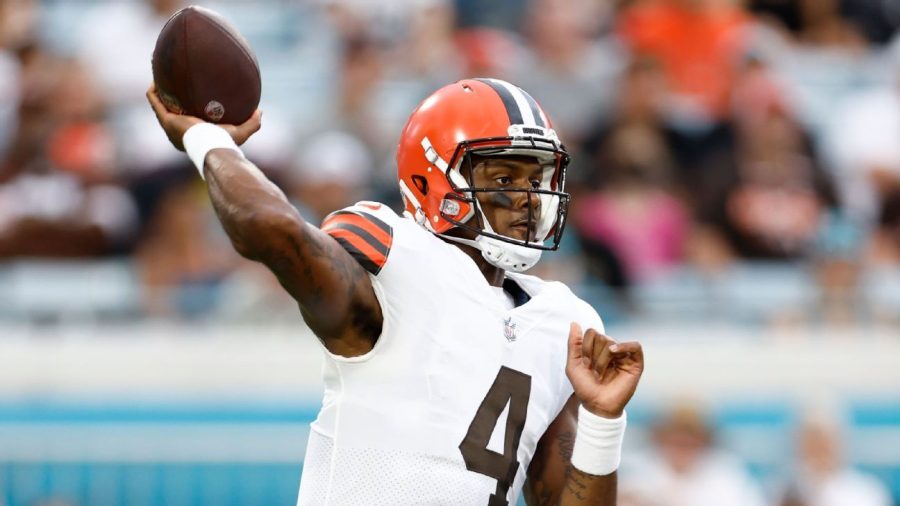 The Cleveland Browns' decision to sign Deshaun Watson, and the NFL's lenient suspension, signifies a lack of regard for women's well-being

Nineteen months after taking his last snap in a Houston Texans jersey, Deshaun Watson took to the field again on Aug. 12 to face the Jaguars in Jacksonville, FL. He was met with a chorus of taunts and chants, including one that rang out: “No means no.”

This hostile greeting does not come as a surprise, as Watson has spent the last year and a half involved in a series of legal battles surrounding accusations of his sexual misconduct towards numerous massage therapists.

After over two dozen women came forward alleging that Watson had behaved in a sexually coercive and inappropriate manner during massage appointments, the N.F.L. and N.F.L. Player’s Association agreed on a former U.S. District Court Judge, Sue L. Robinson, to act as an impartial arbitrator in his hearing.

Upon finding that Watson had violated the league’s personal conduct policy, Robinson’s ruling consisted of a six-game suspension without pay and the condition that he only use his team’s massage therapists. Despite calling Watson’s actions “egregious” and “predatory,” Robinson stated that the league’s recommended indefinite suspension was too strict for his “nonviolent” conduct.

The N.F.L. has long failed to protect women, especially when it comes at the expense of one of

their most talented players, such as Watson. While this outcome was disappointing, it was not at all surprising. Once it became clear that Watson would not be facing criminal charges, multiple teams jumped at the chance to begin trading talks.

As many as four teams entered into these discussions, but eventually, the Cleveland Browns signed Watson to a five-year, fully guaranteed $230 million contract. The ability for Watson to sign a deal that set a new record for the largest guaranteed contract in league history, while his punishment, and therefore, eligibility for the upcoming season was still in question, reflects the priorities of the teams and owners across the league.

After Robinson’s ruling and an outcry of backlash at the lenient punishment, the N.F.L. appealed the decision and came to a final verdict that suspended Watson for 11 games, fined him $5 million and required evaluation by behavioral experts and a treatment program.

According to N.F.L. Commissioner Roger Goodell, “Deshaun has committed to doing the hard work on himself that is necessary for his return to the N.F.L.”

But has he really?

Since the first lawsuit was filed against Watson in March 2021, his statements about the situation have consistently lacked any show of remorse or understanding of his actions.

Watson’s first apology came right before playing in the preseason game in Jacksonville.

“I want to say that I am truly sorry to all the women that I have impacted in this situation,” he said. “I want to continue to move forward and grow and learn and show that I am a true person

In his first steps towards proving his character once the settlement was released not even a week later, Watson returned to denying all wrongdoing and doubled down on his innocence.

When asked if he would trade for Watson again, Browns owner Jimmy Haslam responded with a resounding “Absolutely”.

The mistreatment of women in the N.F.L. will continue because even the most “egregious” and “predatory” behavior cannot prevent one from making his way back to the locker room. Or the field. Or the team-issued massage table.

The toxic culture of the league is displayed through their commitment to ratings and ticket sales, rather than the safety and well-being of women. Deshaun Watson can barely scrounge up a speck of sympathy for the dozens of women he has negatively impacted, but he is a star quarterback. Come Week 12, he will be back on the field in orange and brown, and there will surely be fans in the stands, young and old, little boys and little girls, watching him play as if nothing ever happened.