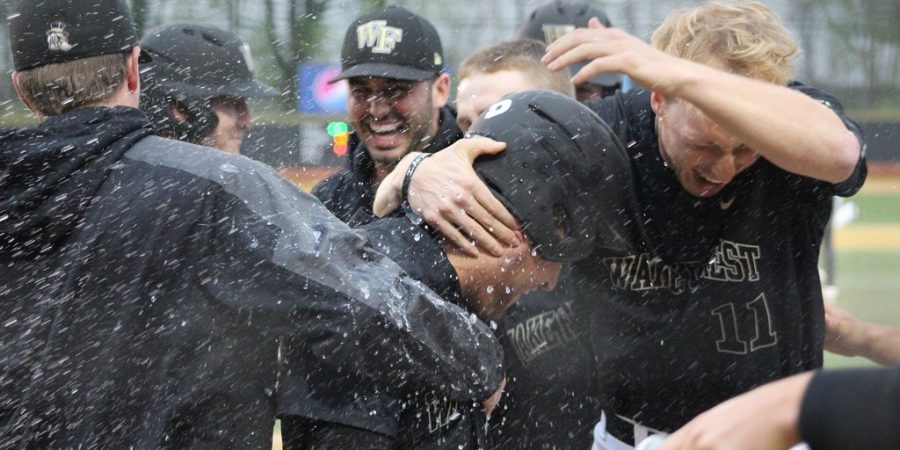 Wake Forest is currently 16-10 (4-5 ACC play) after winning five of their last six games. They started the hot streak with a big win against Virginia and another victory against Charlotte.

In back-to-back games, March 25-26, the Deacs were on a winning streak, beating Duke 12-0 and 3-2 respectively. Regardless of their 3-2 loss in the last game, the Deacs took the 3-game series giving them their first ACC series win of the season. A performance like this, in the midst of a gruesome schedule, bodes well for the strength of this Deacon team.

As the Demon Deacons head into an eight-game road trip, including series against Notre Dame and NC State,   these previous victories could not have been better timed. Anything above a .500 record, in such a critical stretch, would be a success.

Following this stretch, the Deacs remain homebound  for the next 11 games as they are primarily playing instate teams.

The team looks to gain momentum from their recent big wins, including the dramatic 3-2 walk-off win against Duke this past Saturday.

The successful top half of the 10th inning put pressure on Duke, leading to mistakes.

After Will Craig smacked a lead-off bomb in the eighth  inning to tie the game at two, Nate Mondou finished the game with a hit off of a wild pitch in the 10th inning. The final inning was perfectly executed with a single by Mondou, a drawn walk by Craig and a sac bunt by Drew Freedman.

After their wins against Duke, the Deacs were able to score a tough road victory against a gritty Elon team on Tuesday evening.

After trailing for much of the game, the Deacs took the lead in the late innings thanks to a blast from Craig.

These mid-week games are must wins for the Deacs, acting as buffers for the tougher upcoming ACC series play.

Craig still leads the team with a batting average of .450 with 29 RBIs and 8 HR. Stuart Fairchild and Gavin Sheets have been reliable players as well, especially with men on base, racking up 19 and 20 RBIs respectively this season.

Parker Dunshee leads the team in wins on the mound, with four. John McCarren has had 12 appearances and sports a 1.32 era in 27.1 innings pitched.

Overall, the team is doing exceptionally well after tough losses early in the season.

The problem of stranding runners seems to be disappearing. This was most evident in the 12-0 dismantling of Duke last Friday.

Experience may become a bit of the problem in the future when the team begins playing more crucial games, forcing junior and senior leaders to step up.

However, it is evidently clear that this year’s team can play with anyone in the ACC.

After this series, Wake plays 14-straight opponents in North Carolina. Stand out opponents will include NC State and the ACC-best Florida State.

It will be exciting to see how the rest of the season plays out for this year’s team, especially following the ACC tournament.

They are looking for their first NCAA tournament appearance since 2009. In a wide open ACC, a conference championship is not out of the question for this year’s team.

Even with some of the nation’s strongest teams in the ACC, the Deacs have proven time and time again that they are a force to be reckoned with this season.