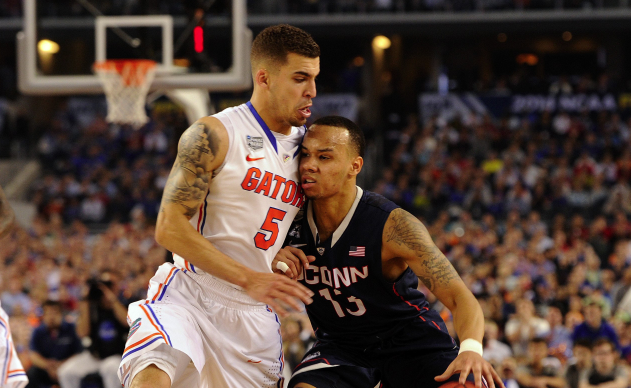 ABC and Fox Sports microphones bobbed up and down in the face of Shabazz Napier. The University of Connecticut point guard was in the midst of a 2014 NCAA Tournament run in which he would win the Final Four Most Outstanding Player award and help his school become national champions.

“Do you feel like an employee,” asked one of the journalists.

Half a second elapsed before Napier responded.

“I just feel like a student-athlete,” he said. “And sometimes, like I said, there’s hungry nights and I’m not able to eat and I still got to play up to my capabilities.”

So in the same year he went to sleep “starving” at times, the NCAA made over $700 million in revenue from a tournament in which he was the star.

It has been talked about ad naseum, but it deserves to be said again: everyone involved with the NCAA Tournament is making money except the players.

Consider that for each game a team plays in the NCAA Men’s Basketball Tournament, that university’s conference is payed $265,791.

And of the teams that made last year’s tournament, the highest paid men’s basketball coach was John Calipari, who earned $6,356,756 according to a USA TODAY database.

Meanwhile, the average salary of an athletic directory at a Football Bowl Subdivision (FBS) university is over $500,000.

A 2011 study by the National College Players Association and Drexel University found that of the 10 best basketball programs in the country, only Duke had scholarship players who lived above the poverty line. And even that was only by an average of $732.

Since then, the NCAA voted in 2015 to allow Division I schools to provide a stipend to cover the full cost of attending an institution.

This certainly helps, but only schools in a Power Five conference provide the stipend. Even within Power Five schools the stipend ranges from $5,666 at the University of Tennessee to $1,400 at Boston College according to the Boston Globe.

There are 32 Division I basketball conferences.

That means there are nearly 300 schools with scholarship athletes who do not receive such a stipend, even if they earn $265,791 for their conference by appearing in a NCAA tournament game (the money is typically divided evenly between member institutions).

And when a player has his “shining moment” in the tournament, he will not be paid any money when that game is replayed over the years on television.

Now with the NCAA being shut out of getting money from the new College Football Playoff and conferences threatening to leave the association, its power to discipline schools is crushed.

“[Because] they face this possible cessation from really powerful teams, they have no control over what the big schools are doing anymore,” said Todd McFall, a sports economist and professor at Wake Forest University. “I think they are afraid to exercise it [i.e. punish schools] because then it places more of an incentive for those powerful teams to break off.”

Why, then, does the NCAA even exist? And for the Power Five conferences (the ACC, Big Ten, Big 12, Pac-12 and SEC), life without the NCAA may make more financial sense.

“There’s a strong possibility the big conferences could make more money per school,” McFall said. “If they broke off from the NCAA and created their own league with their own institutional oversight about how they are going to treat student athletes, and then they start their own

[basketball] tournament, the NCAA doesn’t get any of

Who could get some of that revenue? The people who deserve it the most.

“They [the conferences] could then get out of the NCAA’s umbrella about how to compensate student-athletes, which would be a complete overturning of over a century of treatment of student-athletes,” McFall said.