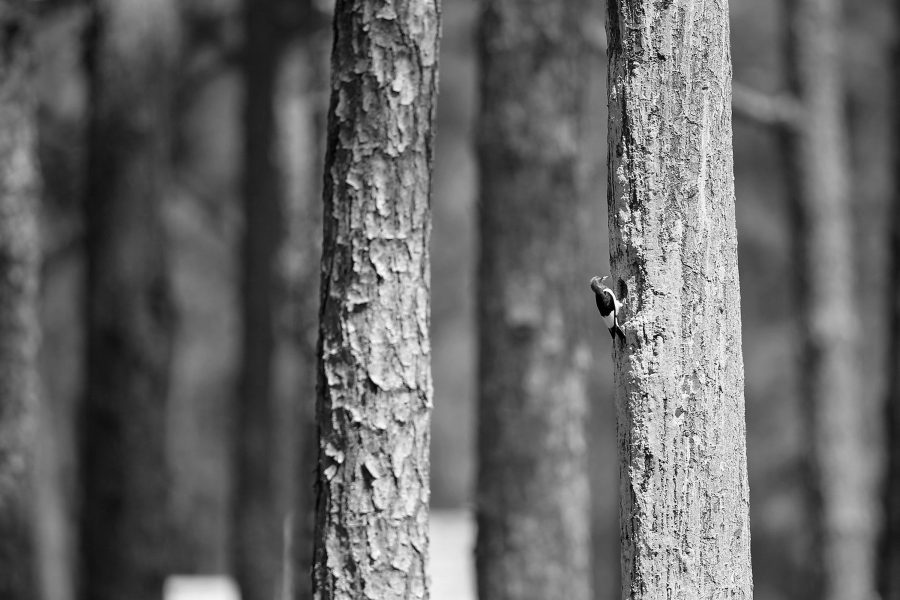 It turns out dogs are not the only animal that like to mark their territory. Wake Forest biology professor Matthew Fuxjager and several students have recently engaged in new research regarding woodpecker behavior.

The bulk of their research has been based on the Wake Forest campus, or in the surrounding areas of Winston-Salem.

From this project, they have had significant new findings related to the territorial behavior of woodpeckers.

“The group hypothesized that woodpecker use their drums — the signal they produce when they rapidly hit their bill on a tree — as a social signal to advertise or communicate with other woodpeckers,” Fuxjager said. “In particular, we hypothesized that a longer drum would signal a better male, because a longer drum would be more difficult to produce.”

It turned out that their hypothesis was mostly correct.

Schuppe has also been very active in the field.

“The most exciting and unexpected finding was the degree to which woodpecker pairs work as a team to overcome different territorial threats,” Schuppe said. “This type of coordination has not yet been described in the literature, and may represent a strategy that other animals that occupy the same space may utilize during competitions.”

Schuppe agrees with Fuxjager on the most important aspect of the study.

“The work provides new insight into how socially monogamous breeding pairs defend shared territories against intruders that represent both a modest and high threat invader,” Schuppe said. “Namely, we show that woodpecker pairs listen to differences in aspects of the drum being produced by these intruders and modify their behavior in way that would given them the best chance of expelling the threat. In addition, we provide evidence that they modify the way they work as a team when a stronger opponent enters their territory.”

This new data can be applied to other fields in new, exciting ways.

“The data shows how signals can be used by individuals to assess intruder qualities, and how such information can cause social partners to synchronize their behavior,” Fuxjager said.  “This likely applies to many animals, possibly humans.”

“Given that many social animals require effective ways to defend shared territories we expect that coordinated aggressive behavior uncovered in this study may be expressed by many other animals.”

Fuxjager chose this topic to research because he’s “interested in the evolution of animal signals, especially those signals that are produced through movements of the body and appendages. Woodpeckers offer the perfect example of this, because they signal using drums, which require whole-body motor skills and coordination.”

Schuppe also agreed that woodpeckers were a good species to research for a few reasons.

“First, the downy woodpeckers that we study are endemic to the North Carolina wilderness and allow us to easily collaborate and work with both Wake Forest undergraduate students and individuals within the Winston-Salem community,” Schuppe said. “More importantly, these woodpeckers are part of a diverse group of animals that all produce these rapid drum sonations to defend territories. Thus, they provide a unique opportunity to study the evolution of adaptive motor displays”

Though Vivlamore was not initially sure what to expect, she has enjoyed her experience in the field.

“I expected to be in the lab, but I ended up getting assigned to the field,” Vivlamore. “I’m glad I did, because I don’t think I would enjoy it as much.”

She also says she has learned a lot from her time in the field.

“I’ve gotten to see the whole process in real-time, which is more realistic than in a lab where you do an experiment one week and then turn in the report a week later,” Vivlamore said. “I love the idea of being able to discover something new that no one else has ever learned before, and working in the lab has given me that opportunity. There’s definitely a bit of a learning curve and some early mornings, but I’m so glad that I joined when I did.”