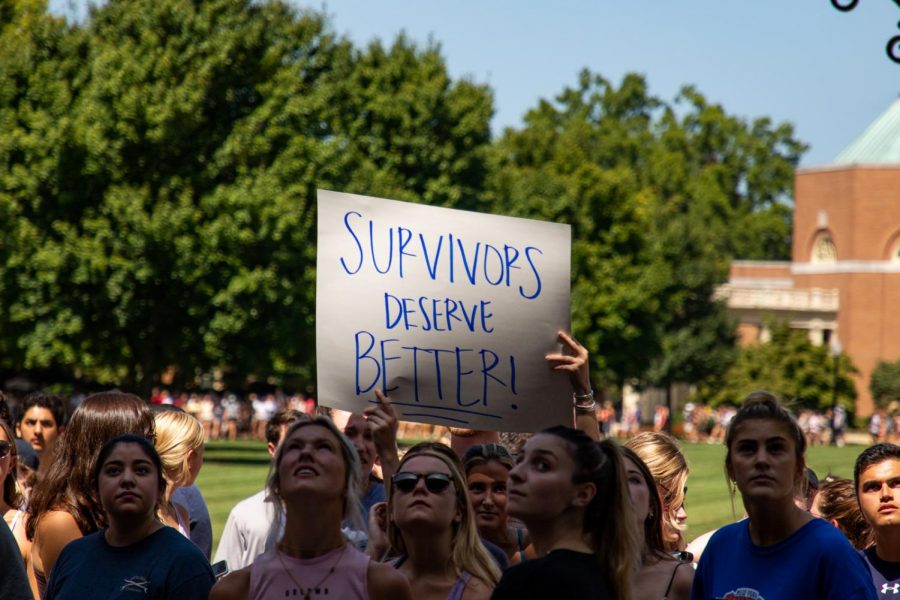 A protest on Aug. 28, 2021 led to increased conversations around sexual violence on campus.

I, Isabella Romine, recently attended one of the facilitated forums discussing the Wake Forest University Campus Climate Survey, which the Old Gold & Black has previously reported on.
“Facilitated forum” is not an especially clear term, so I was not sure what to expect going in, but I was surprised and engaged by the format of the event. Vice President for Campus Life Shea Kidd Brown led an initial discussion on the survey’s findings, and then attendees broke off into smaller group sessions with their tables to process the figures, highlight issues on campus and imagine solutions. We then reconvened to share what our table had discussed.
One of the main topics of conversation regarded the lack of awareness about campus resources for those who have experienced sexual harassment. While a majority of students knew about these resources, the exact percentage varied depending on the resources and could still be improved. Part of this problem can be attributed to how information about these resources is disseminated.

During freshman orientation, incoming classes are bombarded with information. This approach means that details are not likely to stick — or be absorbed at all, as one can only pay attention to so many information sessions. For many students, orientation is probably the first and last time they will hear about the University Counseling Center, the Title IX Coordinator or the Safe Office. And if there’s one thing you can count on, it’s that students don’t read their emails.
Ideally, this information would be provided at orientation but also reshared at staggered intervals. One solution might be to integrate information about these resources into a mandatory course such as HES 100. One student at the forum suggested that the university encourage staff to include campus resources in their syllabi and to discuss them during syllabus week.
Another issue many students at the facilitated forum mentioned is the confusion regarding different campus resources and how they differ from one another.

Wake Forest is not simply acknowledging a problem, but taking action.”

“[The Safe Office] helps students understand their options in reporting and engaging in formal processes,” Kidd Brown said. “Because these experiences can be confusing, we encourage students to start with the Safe Office and they can connect them to other resources.”
The Safe Office is part of the Counseling Center. While 79% of students report knowing about the latter, only 60% know of the former, the lowest of any reported resource knowledge. Since the administration advises survivors of sexual assault to go to them first, it follows that raising the Safe Office’s profile should be a priority. Still, the sexual harassment reporting process must be more transparent so that students have a better grasp of their options. This could in turn increase reporting, as students might feel more confident in what steps to take next.
Though there is work to be done, Wake Forest is already moving to address sexual harassment on campus.
In what is perhaps the most important step, Wake Forest acknowledged that there is a problem and commissioned the Campus Climate Survey to investigate its depth. Additionally, the Sexual Assault Prevention Support and Accountability committee (SAPSA) was created in Oct. 2021 to advise on the rollout of the survey and advise the Student Body President on problems relating to sexual misconduct. Kidd Brown collaborated with the committee to host the facilitated forum.
“Over the past few weeks, I have worked closely with the SAPSA co-chairs, Taylor McCabe and Lillie Davenport, along with Student Body President Pilar Agudelo and Speaker of the House Jackson Buttler,” Kidd Brown said. “Our meetings have helped us keep the student experience centered in the conversation, and their thoughts have been crucial to making sure students are truly engaged in this process.”
The administration’s focus on students’ experiences is another step in the right direction. While the forum could have been a lecture, instead it was a platform where students could share personal concerns. This is especially important, as sexual harassment is also a diversity, equity, inclusion and belonging issue. Undergraduate women and transgender, genderqueer, questioning and non-binary (TGQN) students reported experiencing sexual misconduct at the highest rates, and students of racially marginalized identities also reported experiencing harassment at higher rates. Latina and multiracial women were less likely to report believing that Wake Forest campus officials would treat their reports of experiencing sexual misconduct seriously.
No one person can view a situation from every angle — engaging varied perspectives is the only way to create holistic solutions. Creating spaces where students’ voices across campus can be heard is necessary for progress.
“[The survey’s] findings show that we must connect our work of harm prevention to our work around diversity, inclusion, and belonging,” Kidd Brown said. “Our prevention plan must consider each student’s lived experience so that our approach will be holistic, comprehensive and effective in improving the overall climate on campus.”
She also stated that sessions such as the facilitated forum will be hosted as often and for as long as needed. Student groups or individuals can request a session on inside.wfu.edu.
Wake Forest has also created a new position within the Title IX Office and announced Consent Con, a campus-wide conference. Hannah Dean was hired as the Interpersonal Violence Prevention Coordinator, a new position focused on harm reduction. Consent Con – a conference designed to bring the campus community together to discuss and elevate the work of consent experts on our campus and externally — is scheduled for Feb. 17, 2023.
Both are further signs Wake Forest is not simply acknowledging a problem, but taking action.