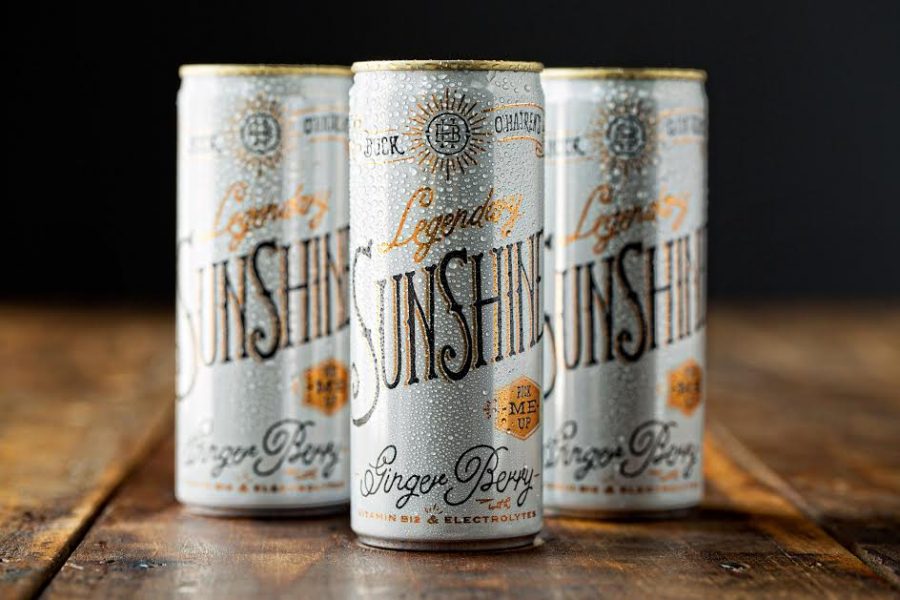 Closing the frost-paneled doors behind him, Joe Parrish’s presence instantly brightens the conference room. Relaxed, he takes a sip of a chilled Sunshine, his arctic blue eyes sparkling over the can’s rim. After graduating from Wake Forest as an English major, Parrish (‘95) created The Variable — a small advertising agency with big ideas.

With the help of his team, he co-founded Sunshine Beverages, Winston-Salem’s favorite pick-me-up.

“As an entrepreneur he’s had to make a lot of risks,” said Ashleigh Rainko, the Senior Account Executive for PR at The Variable. “These risks fuel an entrepreneurial spirit. He runs the business in a way that’s fun, so we love what we do here.”

A father to three boys (11, 8 and 5) and former collegiate rock star, Parrish embodies the optimism and forward thinking stored in each can of Sunshine.

How did you get involved with advertising after graduating from Mother so Dear?

On graduation day I knew I needed a job, but I had no idea what I was going to do. I knew I would go crazy if I had to wear a coat and tie everyday, and that was literally my only job requirement. I played in a band called Last One Standing three years after graduation until I finally realized we weren’t going to be famous, and I needed to start looking for a job.

So you ditched your rock n’ roll lifestyle for pen and paper instead?

Well, I had a crush on this girl who was working at an advertising agency — who turned out to be my wife. I ended up going to an advertising secondary school called Creative Circus in Atlanta. I had a knack for copywriting because it combined everything I loved about English, writing and persuasion. Putting that into a career felt really interesting.

What brought you back to Winston-Salem?

My job in Atlanta required me to move around the country working with different agencies on big brands.  It was a lot of fun, but my wife and I wanted to permanently settle down somewhere by the time my oldest son was in kindergarten. We were both born and raised in Winston-Salem, so we decided to move back and start our own advertising agency.

That’s a big career risk. How did you start The Variable?

The goal was to take everything I previously learned in Atlanta and create a smaller and more nimble advertising agency. There are a lot of good things about big agencies, but there is also bloat, bureaucracy and tired thinking. We poached people from all over the country that felt the same way and pulled them into a core team.

Was Sunshine a product of The Variable?

Keith Vest and I came up with Sunshine when daredevil Felix Baumgartner was going to jump from the edge of space. Red Bull sponsored the whole event, and it was absolutely crazy. Like, “We’re so extreme that we’re going to take someone to the edge of space and have him jump. He’s probably going to die, but that’s all right because we’re rad.” We knew that there had to be tamer version of these outrageous energy drinks, so a creative team at The Variable created Sunshine to play off of the elixir that was sold to cure everything.

What makes Sunshine different than the other energy drinks?

Monster, Red Bull and Full Throttle are all getting more intense and less in touch with the average American. We wanted to make something that would give you the kick in the pants you need to get on with your day. Sunshine has 50 milligrams of caffeine, which is about the same as Mountain Dew, and it has less sugar, vitamin B12 and electrolytes.

Before Sunshine, were you ever a fan of energy drinks?

I drank them all the time in college. When we were performing at venues across the Southeast, our band would stop at convenience stores in the middle of the night to do a “trucker crank” and buy caffeine pills and energy drinks. Our hearts would just start going crazy. Then, I read about them and realized, gosh, if I keep doing this, it’s going to kill me. They’re horrible for you.

Sunshine is not only a healthy alternative, but it’s delicious too. How did you decide on the flavor?

Originally we were going to try fruit punch, but the samples were all disgusting. We wanted something a little more distinct, so someone suggested ginger berry. I was like, I don’t even know what that is, but it sounds good!

So ginger berry was the winner?

The formulator sent us 20 different versions of ginger berry, and we sat around a table for a blind taste test. We wanted to use Stevia, which is a natural sweetener, but found it has a terrible aftertaste. It had to be cut with sugar to take off the bitter edge. It was all really interesting to see advertisers trying to make a drink.

Did your family help you find the perfect flavor?

My kids still think they created Sunshine. They’ve been awesome. I would never let my kids drink Red Bull, but they’re allowed to have Sunshine before their lacrosse game. It’s honestly the highlight of their week.

Bars across the city are using Sunshine as a key ingredient. Do you have a favorite Sunshine-inspired cocktail?

We’ve had a bazillion people make delicious artisanal cocktails, but I’m a traditionalist. My friends and I drink The Buckshot because it’s super easy to make. All you need is Sunshine, vodka, a splash of cranberry juice and a lime.

What’s next for you and for Sunshine?

In the foreseeable future, I’d like to own the Carolinas before we expand. The state has a long history of creating awesome brands like Krispy Kreme, Texas Pete and Cheerwine. When I die, I’d love to know I created North Carolina’s next most beloved brand.