Pursuing dreams versus remembering them 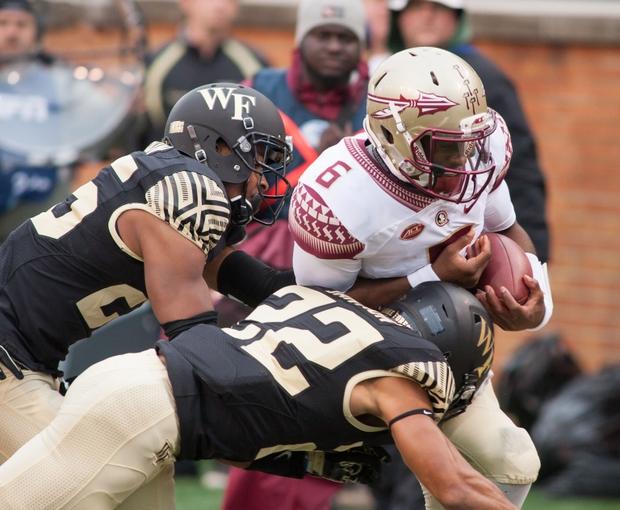 Ryan Janvion was just eight years old, but he had a dream.

He would sit in class, watching the time tick by, anxiously awaiting the sound of the afternoon bell. Each day for one hour, when the bell sounded, he would step onto the open grassy field.It was the arena where his dream of becoming a professional football player began.

Janvion cannot remember his life without football. So, it may come as a surprise that, as a safety for Wake Forest football, his first documented concussion only occurred this past season.

“You hear all about concussions,” Janvion said. “When you get one you think you’re fine, but you’re not.”

The NFL has been under extreme scrutiny, as more cases of chronic traumatic encephalopathy (C.T.E.) have been found in deceased NFL players such as 27-year-old Tyler Sash, a former New York Giant, who died with a progressive case of C.T.E. confirmed at autopsy.

The release of the movie Concussion, based on the work of Dr. Bennet Omalu on C.T.E. in NFL players, has resulted in awareness and necessary changes in how concussions and other brain injuries are managed.

“I saw that movie,” Janvion said, “that is exactly what my life is like.”

While measures have been introduced to enhance the monitoring and prevention of concussions, there has been a lack of progress in developing treatments to help improve the quality of life for those who currently suffer from chronic post-concussion symptoms.

Professor of neurology at Wake Forest School of Medicine Charles Tegeler has been working on a clinical trial to treat and improve the persistent symptoms of concussions — including depression, insomnia and memory loss.

“Research to date has been to understand what is happening and figuring out better ways to prevent it,” Tegeler said. “What we are doing is different.”

Tegeler and his team of neurologists have been working with a system called Closed Loop Neurotechnology. The technology uses scalp sensors to identify dominant frequencies in the brain and translate them into a computer algorithm, resulting in an audible tone that plays back to the recipient in eight millisecond increments.

“It is like a musical instrument tuning itself,” Tegeler said about the brain’s response to the audible tone. “It gives the brain a chance to hit the reset button, allowing it to get back to a more relaxed state and respond properly to normal functions.”

Some 400 people have participated across five of Tegeler’s studies. The studies vary from those involving patients with posttraumatic stress disorder to athletes with concussions.

One of the most recent studies included 16 high school and college athletes, some of them from Wake Forest.

According to Tegeler, the average number of concussions per athlete was about two and a half.

At the end of the trial, 11 out of the 16 subjects were able to return to full participation in their sport, and all of them were able to resume complete exercise and activity.

The results from the clinical trial have been promising.

However, while it has helped to resolve symptoms, there is no way of knowing how deep the problem is and what the underlying long-term effects of the trauma will be.

“There haven’t been any great treatments,” Tegeler said. “There is still a lot we don’t know.”

Janvion has played football for over 14 years. Being selected to be a player in the NFL has been his goal; what he has worked every day towards achieving.

“It has always been my dream to play in the NFL,” Janvion said. “But, when I feel like I am risking permanent brain injury, I will stop. I don’t want to not know my grandkids.”