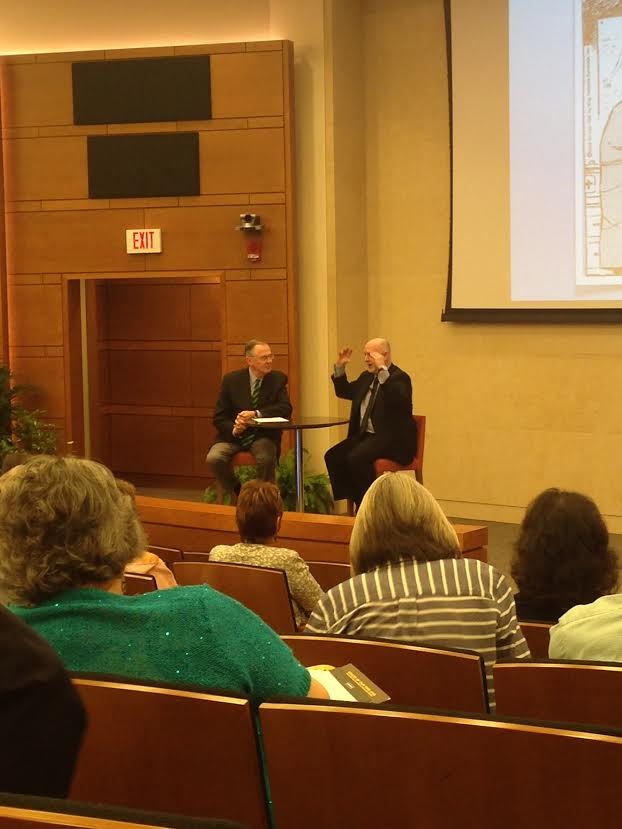 Thursday, March 23, students and community members gathered together in Farrell Hall to hear renowned demographer S. Jay Olshansky speak about aging, longevity and the human lifespan as we know it.

The event was part of the Voices of Our Time series, which aims to allow the Wake Forest community to hear from world leaders about modern issues.

“Dr. Olshansky is a leading expert on longevity,”  said Christina Soriano, a professor at Wake Forest and the chair of the group that selects the Voices of our Time speakers. “As a demographer, he talked about the unprecedented number of older adults living in this country and the problems we all face as we care for them. These are our parents, our grandparents, our professors and our friends. Aging is a vast, intersectional topic that deserves multiple perspectives. It is simultaneously everyone’s problem and everyone’s opportunity.”

The event began with an introduction from President Hatch, who welcomed Olshansky. He promptly congratulated Wake Forest School of Medicine on their department that studies longevity and possible solutions to aging, noting that their research and work is groundbreaking in his field.

He proceeded to explain Gompertz’s line, an essential tool in the study of aging. Essentially, the line represents the timing at which death occurs in humans; our point with the lowest chance of mortality is during puberty, but the likelihood of dying rises exponentially as we age.

Olshansky called this the “concept of constancy,” a biological law that governs nature and aging. Within this law, he explained that the “duration of life is calibrated to the onset and length of a species’ reproductive window.”

He then switched topics, explaining how humans are living longer now than ever before. He articulated that “the rise of heart disease, cancer, stroke and Alzheimer’s, are not a consequence of failure; they are a consequence of success. They signal that we’ve made it far enough to be affected by them.”

According to the research of Olshansky and other professionals in the field, we have built the “mountain of mortality,” as longevity increases, so do the degenerative diseases previously mentioned. There are “fundamental tradeoffs” that occur when we exchange longevity for quality of life.

So, Olshansky and his colleagues believe that “instead of focusing all our attentions on individual diseases, we should be focusing on the fundamental processes of aging that give rise to all these diseases.” They are seeking to shorten or “compress the period between physical decline and death,” an effort called “compression of mortality.”

Olshansky felt that, if we are successful in focusing these efforts to extend longevity on what ages us, “we will have witnessed the advancement of public health that is roughly equivalent to the introduction of antibiotics in the middle part of the 20th century. It would be a game changing intervention to influence humanity.”

“We have scientists here, at this university, who are doing some of the groundbreaking work,” Olshanksy said. “I’m hoping that one of them eventually develops the intervention that modulates aging that allows us to extend a healthy life.”

At the end of the talk, President Hatch asked Olshanksy a few questions, including how we can change our thinking regarding older people, and the new promising research being done in the field.

“[We need to] dismantle the myth that aging is bad for us,” Olshanksy said. and “change our laws and policies to enable people to remain in the labor force for longer if they want to.”

“My own greatest excitement is in the study of long lived humans. We don’t have to cross species, but can look at our own selves. If you had older grandparents, we can see that you’re aging slower than other people in the audience.”

Finally, the floor was opened to questions, many of which revolved around what we can do today to live longer, healthier lives, a topic Olshansky had previously discussed.

“The first thing everyone should do, regardless of age, is avoid the things that accelerate aging: smoking, eating poorly, drinking a lot of alcohol, drugs, leading a sedentary lifestyle,” Olshansky said.

After that, over your life is to enhance the quality. There are only two things that can extend the period of healthy life; exercise and diet. Exercise is the only equivalent of a fountain of youth”.

Olshansky’s research has been published various times, and is accessible online, for any who want to learn more about aging and longevity.

“Olshansky’s background as a teacher was very noticeable,” said freshman Tom Budzyn. “He kept the audience engaged, and his research will likely have lasting impacts.”