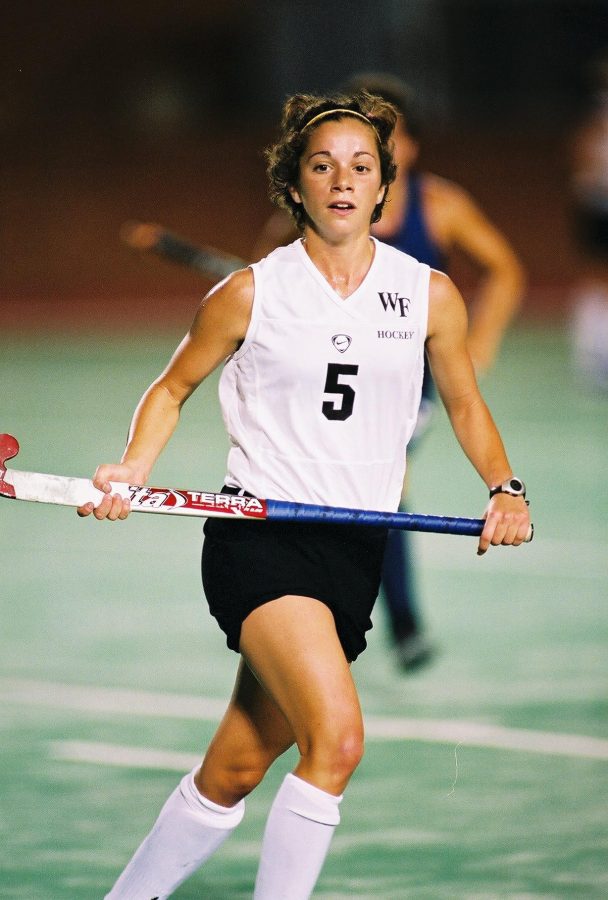 Standing at a mere five feet tall and weighing 105 pounds, Maria Whitehead walked into the Wake Forest field hockey office her senior year of high school. She sat across from head coach Jen Averill in the same office that every player has sat in since that year, 1999.

“She walked in and I went, ‘This is not going to work. This meeting will be about 20 minutes max,’” Averill said 16 years later. “But the minute words started to come out of her mouth, I knew that I had a pistol on my hands. Her stature didn’t impress me. Her actions and her words did. I told her, I don’t think you can make it in this league. To which she redirected me, ‘Any time, any day, any opponent.’ I shook her hand and said, ‘Welcome to Wake.’”

Whitehead, a Pennsylvania native, was recruited by many other big name schools, including University of Maryland, Old Dominion University and Ohio State University. She chose Wake Forest because she respected Averill, she loved the team and “it felt like home to her.” When she committed to Wake Forest she said to Averill with confidence, “I believe in you. I believe in what you say. I believe in what the two of us can accomplish. I think we’re going to get it done here, and that’s why I choose you.”

Few could deny that Maria had an incredible career at Wake Forest. She had a total of 40 assists — which is the fifth most in Wake Forest history — was a two-time all-ACC selection, helped the Demon Deacons to three Final Four appearances and contributed to bringing home Wake Forest’s first ever national championship for field hockey in 2002. After winning the championship her senior year, she hugged Averill and said, “Told you we’d do it.”

She was feisty and always wanted to win. Sometimes, she had a little too much fire. Her mom recalled one game in particular that Averill, was being extremely vocal to the referees. So, Maria thought she could be vocal to the them as well. Averill pulled her out of the game immediately. Later, her mom asked her what she and the coach were arguing about, to which she replied, “I just told her if she can yell at the refs than so can I!”

After graduating from Wake Forest in 2002, she got a job coaching field hockey at St. Louis University. She became the youngest college coach in the country, beating her own college coach Averill by 10 months. Two years later, Averill got this phone call from Whitehead:

Whitehead: I had that mole removed off my back, Jen.

Whitehead: They said it was skin cancer, Jen.

Averill (a pause and then): What?

“I had known all the stages,” Averill said, tears beginning to well up in her eyes. “Skin cancer. People don’t die of skin cancer. All of a sudden she was really quiet, and she brought me back and said, ‘Remember when I sat in your office and told you I believed in you? We probably have to do that all over again.’ So this time I said, ‘Okay, Maria, I believe in you.’ Then I quickly hung up and called my sister-in-law who is an oncologist. ‘Stage four melanoma?’ She goes, ‘It’s a killer.’ I think I went upstairs and vomited.”

“Everyone in her life believed she would beat the cancer,” said her former teammmate Katie Ridd, after first hearing she was diagnosed. “I was shocked. But then again, she was a fighter and I assumed she’d win this fight like every other fight I’d known her to win.”

The cancer spread to her brain and over the next few years she underwent numerous chemotherapy treatments, radiation therapies and brain surgeries. She left her coaching job at St. Louis in 2005 and got a position coaching at Duke, which also allowed her to have three men in her life who thought of her as a daughter: Henry Friedman, director of Duke’s Brain Center, Jim Vrdenbough, her oncologist and Alan Friedman, one of the best brain surgeons in the world, who performed surgery on her brain. This surgery got rid of the cancer in her brain.

Later, she accepted the opportunity to be used in a pilot program for an experimental drug because she had been cancer free for three months. Right when she was to start her trial, she began having pain in her belly. The cancer had come back, this time attacking 90 percent of her liver. She was the worst she had been yet.

During the time of her sickness, she barely missed any games and made it to as many practices as she could. People who knew her while she was sick described her as optimistic, brave and determined. They said she “never missed a beat.”

On November 1, 2006, Averill received a phone call from Whitehead’s partner during the time. She put the phone down and screamed. Whitehead, the contagious spirit who everyone knew and loved, who everyone thought would never lose, had lost her life to cancer.

Immediately, something shook the field hockey world, and specifically, Wake Forest Hockey. Wake Forest was competing in the ACC championship on the Sunday following Whitehead’s death, the same day as the eulogy and celebration for Whitehead. Averill did not come up with a game plan for the game. She did not come up with a pre-championship speech. She couldn’t speak. She couldn’t think.

Her players looked at her and said, “We got it coach. You don’t have to do a thing.” The team went out and played an incredibly hard fought game, beating Maryland and gaining their third ACC championship title. The team came together on this day for their coach, for each other and in honor of the life of one of their own, Whitehead. This was the first of many times that Wake Hockey would play for something more, for someone more.

Whitehead’s story has been told countless times and even current players who never knew her know what it means to “play for number five,” which was her jersey number.

Karlee Spirit, a sophomore on the current Wake Forest field hockey team, said when someone says the name “Maria Whitehead,” she thinks of fight, courage and adversity.

“She was someone who has not only left an example of passion and love of the game, but has left the biggest and most notable mark and legacy on Wake Forest Hockey and the institution of Wake Forest,” Karlee said. “It was her story and the way in which it shaped and molded Wake  Forest hockey and its culture that made me want to be a Demon Deacon. Her story moved me, motivated me and persuaded me to want to spend the next four years of my hockey career working to make her proud and to make her legacy continue.”

At the end of the year, Jen honors one player with the “Maria Whitehead award,” which represents persistent fight and a courage throughout that entire season of play. She brought awareness of melanoma to the Wake Forest community and to the hockey community around the nation.

Each year, Wake Forest Hockey puts on a dodge ball or spike ball tournament to raise money and awareness for melanoma. This event was started by Liza Casella, a former player, in 2010, and has become an annual fundraiser in honor of Whitehead. It will take place this Sunday, April 10.