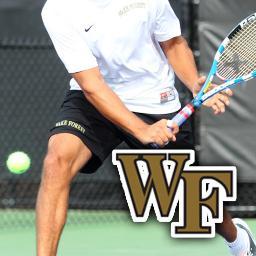 The Wake Forest men’s tennis team has been quietly destroying their competition this spring season. They have mowed down every ACC team they played this year, including seven shut-outs.

For whatever reason, the Deacs were seemingly not getting the respect they deserved from national outlets, as they were never able to climb above the number five spot in national rankings.

This past week, the team headed out for a two match road trip against some stiff competition, and had an opportunity to show the entire country just how much of a threat this Demon Deacon squad really is.

The Deacs first headed to Blacksburg, Va., to take on the No. 46 ranked Virginia Tech Hokies. The Hokies have all the talent in the world, but have lost some excrutiatingly close matches this season.

The Deacs won the doubles point, but the Hokies went up quickly in most of the doubles matches. Things seemed bleak for the Demon Deacons, but they were ultimately able to battle back and win the match 4-2. This was a huge road win as the Deacs could have been caught looking ahead to a big match later in the week at the no. 1 team in the country — North Carolina.

The Deacs traveled to Chapel Hill after the big win against the Hokies looking for an even bigger victory against the top-ranked Tar Heels. Entering the match,

North Carolina had only lost one match all season, and this was a road match where the Tar Heels were heavy favorites.

The Deacs got off to a rough start as they lost the doubles point. Finding themselves in an early hole, and with the doubles point often being the decisive point in college tennis matches, things seemed bleak for the Deacs. To top this off, the Deacs quickly found themselves down in all but one of the singles matches. The Deacs, however, never gave up and were able to battle back in these mathces.

With the overall match tied at three, Romain Bogaerts was able to win a tiebreaker in the very last set of the match to give the Deacs a massive 4-3 victory over the Tar Heels. This was not just a big victory for the Demon Deacons, it also proved that the Deacs are going to be in contention for a national title.