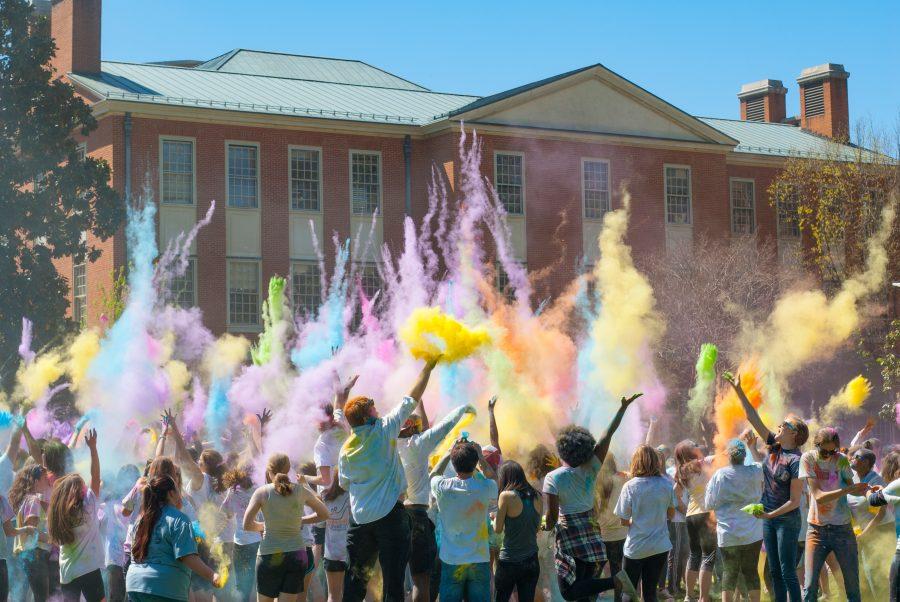 Crowds of students dressed in white gathered on Manchester Plaza Sunday April 3, in celebration of the Hindu holiday Holi. At around 2 p.m., clouds of color rose above the crowd as everyone tossed their powders into the air.

This marks the third year that the South Asian Student Association (SASA) has organized a celebration of Holi.

“The first official Holi celebration was in the spring of 2014 in a partnership with ASIA,” said Aishwarya Nagar, the SASA president. “When I became president of SASA during 2014-15, one of my primary goals was to establish key annual events, and Holi was one of them. Holi 2015 was fantastic, and attended by close to 300 people. This year’s Holi was bigger and better, and I feel like Holi has become a cherished Wake Forest tradition.”

To begin the festivities, traditional Indian cuisine was provided free for students. Students sat on the quad to enjoy their samosas and chicken.

After about 45 minutes, Indian dance group Deacon Dhamaal performed a 10 minute routine to a mash up of different songs. The choreography blended traditional Indian dancing with popular dance trends like the “Whip.”

After the performance, bags of colored powder were handed out to students in preparation for the huge color fight that was to ensue.

The powder itself was made with dyed rice flour in an array of different colors.

Nagar counted down from five, and everyone threw their powder into the air, creating a dust storm of bright pinks yellow, blue, orange, green and purple.

From there, it proceeded into colorful chaos, as students threw powder at friends and strangers while a cloud of smoke hung over the crowd.

Some students even took water balloons or huge buckets of water and dumped them on others.

“Organizations like SASA occupy a unique position on this campus,” Nagar said. “We don’t have a lot of funding, but we dream of providing strong cultural support systems for students and creating inclusive spaces of celebration and appreciation. Holi is one of the many festivals we hope to continue celebrating on campus. We would love to see students become more engaged with cultural organizations on campus and the amazing events they organize.”

Nagar also said she loves the opportunity that Holi creates for students to feel a part of a community.

“Some students find it to be a great way to learn more about cultures and traditions that are not dominant in the United States,” Nagar said. “We make sure to explain the historical and religious significance of Holi so that our peers derive both entertainment and knowledge from the event.”

“As for me, a South Asian student, I gain so much from this event; every year, I feel more at home on our campus knowing that I’m sharing my love for Holi with over 300 peers.

Freshman Ben John, a member of Deacon Dhamaal, said “as a student of color, it’s great to see everybody together to celebrate and see the whole campus come together to enjoy the festival of color as one student body, not as different groups”.

“Holi is one of my favorite events at Wake Forest because it’s an easy way to learn about a different culture while having a fun time with your friends,” she said. “All of the colors thrown into the air are so beautiful, and I’m also a huge fan of Deacon Dhamaal”.

Senior Tim Woodin said, “It’s encouraging to see so many Wake students come support a culture many do not call their own”.