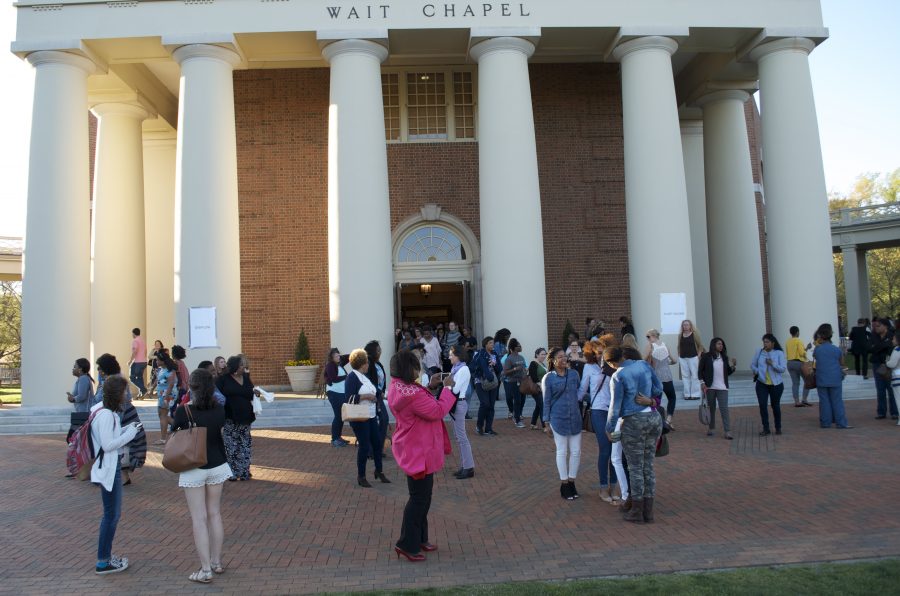 Award winning actress Viola Davis, best known for her roles in “The Help,” “How to Get Away with Murder” and upcoming film, “Suicide Squad,” spoke to about 1,500 people in Wait Chapel on Saturday.

Born in St. Matthews, S.C., Davis and her family moved to Central Falls, R.I. when she was only weeks old.

According to Davis, they were the only African-American family in the entire town.

Davis spoke primarily about her struggles to escape her “ordinary” childhood to enter the film industry as an African-American woman.

“I was born in my grandmother’s house with no running water, no indoor toilet, Lord knows how many people living in a one-room, sharecropper’s home on the plantation,” Davis said. “My mom had an eighth grade education, my father a fifth grade education. My father was illiterate until he was 15. He learned how to read by reading billboards on the side of the road.”

Davis discussed her journey in the framework of a hero’s story saying she had to face many tests and obstacles on her way to her goal, her elixir.

Davis said she was initially inspired to become an actress, to start out on that path when she was just eight and watched Cicely Tyson in “The Autobiography of Miss Jane Pittman,” the story of an African-American woman who was born into slavery and became involved in the civil rights movement in the 1960s.

“What I saw with Ms. Cicely Tyson was magic,” Davis said. “It was art. In the midst of this poverty, it was like the wind stopped blowing and the air stopped moving. That’s when I knew what I wanted to do.”

Davis graduated from Rhode Island College in acting and attended The Julliard School.

It was at The Julliard School that Davis was presented with a major obstacle.

“That’s when I hit a wall,” Davis said. “Because as much as I didn’t want to be like my mother, I realized I was very much like my mother. As much as I was running from those boys calling me every name in the book, I believed every word they were saying about me.”

Because I went to Julliard, and I understood the world didn’t understand my imagination. The world had a definite idea of who I was. So, I had no weapons in my inner life to fight what this industry told me I was.”

After she graduated from Julliard, Davis turned to therapy to help her find her way and to help her convince herself that the world’s definition of her was not true.

Davis said she struggled to find roles in the film industry where she did not fit the molds of what others thought she should be.

Her career changed when she was awarded an Oscar in 2008 for Doubt, but soon, she was back to where she was before.

“I realized after the Oscar nomination that I was right back where I was before, only making a little bit more money,” Davis said. “In our industry, you’re fighting an industry that has very set goals. I was still that little girl of eight years old, running from those boys and running from denouncing everything people defined me as.”

Davis said that her role in The Help was the major change in her career.

She enjoyed working with other actors on the film, but she did not like the film itself.

“It was supposed to be from the maid’s point of view, and if it was it would be rife with way more anger and way more pain,” Davis said. “It was watered down, and it’s not an exploration of our pathology.”

The film also gave her more opportunities. However, she was still offered roles that fit the industry’s strict definitions of her identity.

Davis, disappointed with those roles, decided to start their own production company, JuVee to create films that broke the industry’s mold.

It was initially her husband’s idea.

“He said, ‘We can either wait for Hollywood to create those narratives or we can find them ourselves,” Davis said.

Davis wanted to create narratives that transmitted her true feelings and identity.

Davis closed with a piece of advice for the audience.

“The sweet elixir of what I can give any of you is that you’ve got to dare to fail greatly,” Davis said. “You have to dare to strip your heart away and show the world who you really are.”