Does Your Hotline Ring? 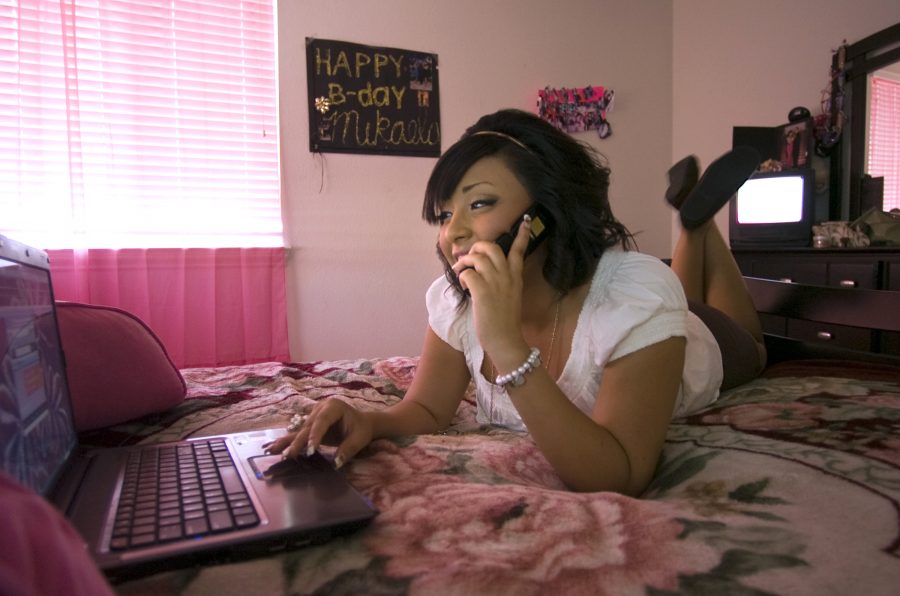 Fast-forward 14 years and the modern lyrics would be, “Text me, chat me, if you want to talk to me in a really inefficient way.” Stroll down any street, dine at any restaurant or look at the car next to you at a red light, and I’m sure you’ll see a majority of people glued to their phone screens as they furiously text away. Although we live in a texting-obsessed era, I prefer phone calls. This, I realize, is a rarity, but here are some reasons why.

Although it may seem faster and easier, texting is actually making communication harder. Emotions, sarcasm and tone get lost in translation because we can’t use non-verbals to convey a point. A receiver often misinterprets a sender’s intentions, even with something as simple as a period. “I’m really sarcastic and have a dry sense of humor so most people don’t interpret my texts the way I intended,” said junior Emily Strachan. “I’m big on phone calls these days … real laughing out loud is more fun.”

Texting Separates You From Reality

Most people spend their time walking to class or waiting in fast food lines by scrolling through their phones or responding to texts. By looking at a phone you’re not just killing time, you’re also neglecting to pay attention to your surroundings. You have tunnel vision. You’d be surprised to realize that if you look up, you may run into an old acquaintance or even notice the blooming flowers.

Texting Is Killing Your Relationships

Even if you’re with all your friends, you probably look at your phone. If I invite you to breakfast, lunch or dinner, I want to talk to you; not look at you while you text other people. We devalue the presence of the people around us, and the idea of being present is disappearing. Rouge 24, a restaurant in Washington, D.C., makes their customers sign a contract that promises they won’t use their cell-phones while dining at the establishment. The owner hopes to encourage customers to enjoy the experience.

You Can’t Text and Drive

Not only is texting and driving illegal, it’s also hard. A 2009 study by the Virginia Tech Transportation Institute found that “texting while driving has the highest crash risk of all cell-phone related tasks.” Although you shouldn’t dial numbers the whole car ride, using Bluetooth in your car is best. When you get sick of the same music playlists and radio commercials, call a friend to pass time in a safe way.

The Harsh Light Can Disrupt Your Sleep

The innovative smartphone has transformed society in many ways. We don’t realize some things yet, but one thing we do know is that it’s ruining our sleep. Smart phones emit blue light, which suppresses sleep hormones, making your brain think it’s morning. So, if you’ve had trouble falling asleep after texting in your group chat, here’s your answer. Studies have confirmed that people who have more screen exposure throughout the day have lower levels of melatonin.

Screens Are Straining On Eyes

Ever scroll through Instagram for a long time and then look up to find everything a little blurry? Studies show that cell phones can damage eyesight. Looking at phone screens requires the eye to focus close-up. The eye adapts to the close viewing distance by elongating light from the screen to the back of the eye. This adjustment is great for viewing things up close, but it ruins your focus for distant objects.

Think about those nervous butterflies you have when you hear your crush’s voice in the cafeteria or the hallway. Voices say a lot. Countless studies show that voices release hormones and nerves in our brains to help us determine personality, emotional state and even attractiveness. Although we can send a million flirty texts and selfies, nothing will replace hearing someone’s voice. We can’t change our voice boxes, but knowing they influence perceptions is a good reminder to speak more.

Texting Lingo Is Making Us Dumb

Between iPhone auto-correct and texting lingo such as: BTW, TTYL and ILYSM, we’ve forgotten how to spell. In 2009, 300 children aged 11 to 14 were given cognitive tests to see how mobile phone-use affected their literacy performance. The study, conducted by Dr. Michael Abramson, found that children who use mobile phones perform faster but with more errors. Texting may be forcing us to write faster, but it isn’t helping us write better.

Back when Blackberry’s were “in,” there was a term called “Blackberry thumb” to describe the pain in your fingers from texting. Although we’ve improved devices since the early 2000s, the smartphone’s small keyboard hasn’t changed. Doctors agree that repetitive hand use (texting) causes joint pain in wrists and fingers. A common spot for arthritis is at the base of the thumb. To prevent this excruciating pain, the best option is to limit your texting.

The Conversation Isn’t Just Between You Two

The rise of technology has made just about everything public. Let’s be real: your boyfriend isn’t just dating you, he’s dating you and all of your friends. Screenshots of text messages are sent to group chats in seconds. Nothing is private with texts, but phone calls are only between you two. You can’t capture the phone conversation in a photo, and if you can’t respect your boyfriend’s, or best friend’s privacy, the relationship probably won’t last.