The Chainsmokers perform a high-energy act 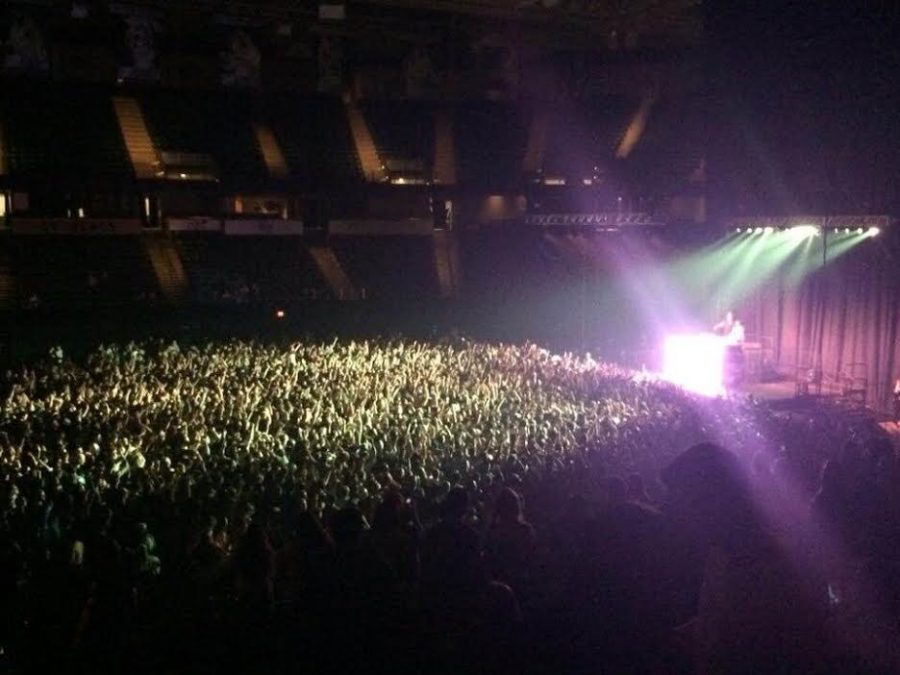 The spring concert the Student Union put on Friday, April 8, went off almost without a hitch — even with the last minute sickness of Sage the Gemini, they were able to get a DJ to stand in and keep the crowd mostly appeased.

Once the Chainsmokers duo finally came out onto stage, an incredible energy filled the room and the show began fluidly; it was like they had been with us that whole night and knew exactly what we felt like dancing to.

I have no previous experience at a DJ show and thought that watching someone stand behind a soundboard would be boring, but I was happily surprised by the interaction we were able to have with them and how comfortable it felt to dance along with everyone else.

It felt like they weren’t just working hard up there to find the perfect next song or insert the best effect on the song, as they also appeared to enjoy the music themselves and tune into what they wanted to hear. Member Andrew Taggart was constantly interacting with the crowd when he wasn’t working the board.

Whether he was jumping and hitting the stage right as the song dropped or yelling, “Turn the *%#@ up!”, there didn’t seem to be any real wall or pedestal between us.

I think that any great show is made better by a performer who is present in the moment and expressing the same enthusiasm they want the audience to have. The Chainsmokers definitely brought that to the coliseum.

The Chainsmokers played a few notable remixes at the show. My personal favorite was a mash-up of their hit song “Roses (feat. ROZES)” and blink-182’s “I Miss You.” Somehow they were able to take a heart-wrenching rock song with intricate instrumentation and put it on top of dance beats to create something that was super fun to dance along with.

Another cool mash-up, reminiscent of their hit “#SELFIE,” was a clip from “All I Do is Win” when everyone obeyed the song and put their hands up, we were all standing there in anticipation of the drop, but instead we heard The Lion King’s “Circle of Life.”

They inserted that bit of humor and still satisfied us with a drop. There is a certain element of chill that The Chainsmokers brought to the stage, and their remix of the Red Hot Chili Peppers’ “Under the Bridge” definitely emphasized this.

Besides the remixes, they also played their original songs from their EP Bouquet and had everyone singing along to “New York City” and “Roses (feat. ROZES).” None of the songs sounded exactly like the original recording due to their musical improvisation and feeling of the energy in the room.

As for the venue, Wake Forest only has so many options for artists to come and perform, and the LJVM coliseum was just fine for the size of the crowd.

I definitely had to put effort in to avoid getting beer spilled on me and an elbow in my ribcage, but was still able to enjoy the show.

The sound and dancing atmosphere definitely would have been more enjoyable if they had been playing outside, and I am very jealous that I won’t be at Coachella later on this month in Indio, Calif., where they will perform both weekends of the festival.