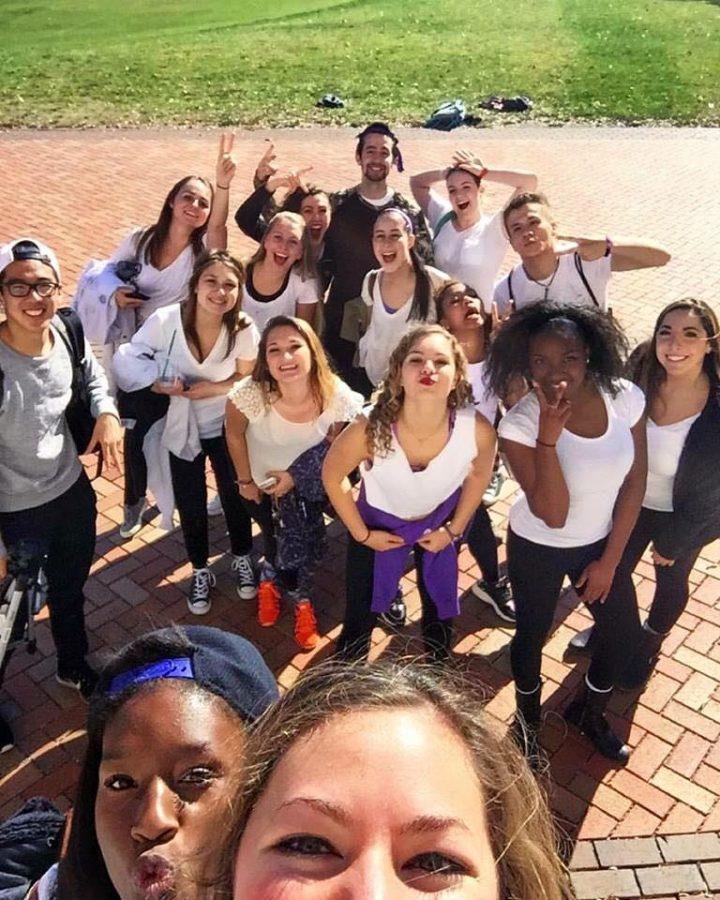 Momentum Crew is a hip-hop group on campus of 30 students who pride themselves on their passion for dance and their family-like dynamic.

“Momentum is almost like a safe-haven for people who really just like dancing,” said senior and president Luke Gabriel.

The group, founded in 2005, holds tryouts every fall. No hip-hop experience is required.

“For the most part, people have had some level of training, very rarely in hip-hop alone,” Gabriel said, who joined the group his freshman year without any prior training. “That’s what makes us so unique. We have the ability to play on everyone’s strengths and highlight them within hip-hop. It becomes a really cool hybrid dance style.”

There is a range of members’ hip-hop training and experience. Similarly, members differ in background, academic pursuits and involvement in other organizations.

According to senior Judy Hu, it is their diverse personalities that make Momentum Crew special and strengthen their strong social ties.

Hu, who is from Hangzhou, China, joined Momentum Crew her sophomore year. She later began choreographing pieces for the group. According to Hu, choreographing is her way to release energy and express her emotions through movements.

“Doing choreography got me out of my comfort zone, which I wouldn’t have expected before I joined Momentum Crew or before I came to college,” Hu said.

Anyone in the group is allowed to choreograph, according to Gabriel, who choreographs and finds inspiration from his personal life, music and YouTube dance videos. There are currently seven choreographers in Momentum Crew. Their work is pieced together to form sets, or routines, for their performances.

Momentum Crew performs at least once a month and competes in a national competition every spring semester.

“It’s a club that provides the chance to perform at a high level with the least amount of stress or drama,” Gabriel said.

From cyphers or freestyle battles on the Magnolia Quad to flash mobs in the Pit, Momentum Crew often performs its sets at various on-campus venues.   The crew also participates in events like Project Pumpkin, Wake n’ Shake and more.

“We want to really get down to the earth and get in contact with all the people at Wake Forest and show our faces around campus,” Hu said.

Momentum Crew is involved on campus and in the Winston-Salem community. While members like showcasing their talent and growth, their main goal is to spread their love for dance.

“Momentum performances always look like a good time, like they’re all really enjoying themselves and are happy to be there,” said junior Megan Nigro, a member of the Wake Forest Dance Company and Setting the Groove Tap Club. “It seems stress-free, which as a dancer, I know that it probably isn’t.”

“This was my fourth competition, and it was kind of like the culmination of all my years in the crew,” Gabriel, who helped choreograph the set, said. “I think just the overall happiness and acceptance with the whole set really proved something special for me.”

Momentum Crew also performed this set at Burn It Up: Dance Showcase in Brendle Recital Hall this past Sunday. Other dance groups on campus also performed, including Ritmo Latino, Lost in Translation, Decaon Dhamaal and Setting the Groove Tap Club.

Though Momentum Crew’s performances are frequently in everyday venues around campus or outside, this was not the crew’s first time performing in a theatre.

Momentum Crew also took to the stage during the Wake Forest Dance Company’s Spring Concert last year. Members of the crew agreed that the concert was a unique experience and interpreting different hip-hop elements in a theatre setting was a challenge. Being out of their boundaries, they added, pushed them. According to Hu, she saw a big growth in Momentum Crew and called the experience a “special one.”