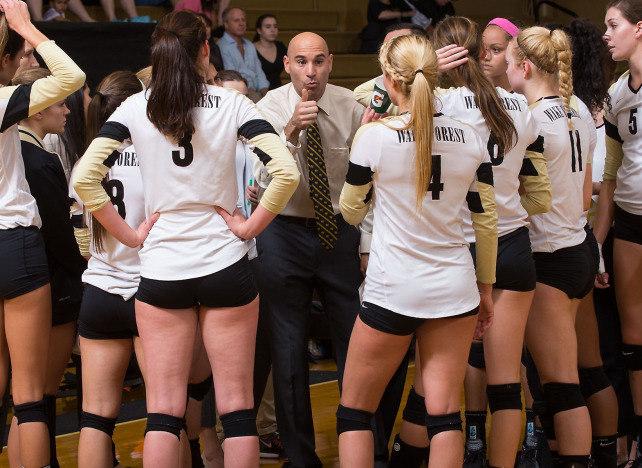 Ciara Appelbaum learned to love sitting on the bench. For her and other members of the Wake Forest women’s volleyball team, the bench meant safety from head coach Ken Murczek.

“I stopped performing in games on purpose just to be on the bench,” Appelbaum said. “I was concerned for my safety on the court.”

Over the past two months, current and past players of the volleyball team and their parents shared their concerns with the OGB over Murczek’s behavior towards the team. They describe an ongoing pattern of verbal and psychological abuse.

The allegations are similar to those brought against the women’s hockey coach at Pennsylvania State University last month and a growing trend of investigations into the coaching practices of athletic teams at colleges around the country.

A strategy of anger, fear and manipulation

“Coaches, from time to time, get angry,” Athletic Director Ron Wellman told parents and players amidst a Title IX investigation into Murczek’s behavior in December 2014. “The anger isn’t so much emotion as it is a plan to get the team to a different level of success.”

But many players view this coach’s behavior differently.

Former and current members of the team recounted instances during practice where Murczek would scream obscenities and derogatory comments at specific players for making even the smallest errors.

Among other examples, he would often call girls “fucking retarded,” according to former player Maggie Sinkler in an interview with HBO’s Bryant Gumbel in March 2015.

Along with verbal reprimands, the players said the coach would dole out harsh punishments for mistakes made on the court. One former player, who asked to remain anonymous, recalled watching a teammate being singled out and forced to run for two hours. Afterwards, Murczek continued to berate her as she sat sobbing from exhaustion.

“I hated [practice]; I was scared,” Sinkler said in the HBO interview. “We had girls crying in the locker room after every practice. Everyone was terrified.”

In an interview with the OGB, Murczek denied the allegations.

“I don’t use vulgarities,” he said. “That’s not who I am. There’s never been a situation where I feel like this would be a threatening environment.”

Players said the coach’s strategy of intimidation extended beyond practice.

According to team members, Murczek’s constant obsession with their weight and food choices left them hungry and exhausted before and after practices and games.

“There was never enough food,” said one former player, who requested anonymity for fear of losing the remainder of her scholarship. “[Murczek] always questioned our portion sizes and would yell at us for having dessert. I feel like we’re the skinniest team in the ACC.”

Some recalled asking their parents to sneak food into their hotel rooms during away games because they weren’t given enough to eat.

Murczek had the team test their body fat percentage every other week and would push players to lose weight constantly.

Players said they were also required daily to fill out a sheet detailing every meal they ate in addition to how they spent their time.

The coach punished those who ate less-than-healthy meals or spent too much time on social media rather than the gym, according to players.

Murczek said he had never heard of the time sheets. He also said the girls were fed well at every meal, and he encouraged healthy snacks, like fruit, throughout the day.

“What you put in your body is fuel,” he said. “When you put diesel in a regular engine, it doesn’t start. We have guidelines to help them make good choices and put good fuel in their body.”

According to other athletes who have been coached by Murczek, his leadership style is not unique to his time at Wake Forest.

Addason Lamb played under Murczek when he coached for the University of North Texas before coming to Wake Forest. She told the OGB Murczek used anger, fear and manipulation as a coaching strategy.

“I thought Ken [Murczek’s] behavior as a coach was normal until he left,” Lamb said. “He ruined the first two years of my college experience.”

According to Lamb, Murczek would target players he didn’t like with comments like, “You look like shit,” and “You’re the fucking reason we’re losing this game.”

Lamb also said he would feed the team very little, even in preparation for a game. Lamb’s mother, Tana, described one occasion where Murczek forced a red-shirted player to write a four-page apology letter for eating two breadsticks at Olive Garden instead of one.

“When Addason found out Ken was leaving UNT, she cried tears of joy,” Tana Lamb said. “She told me, ‘He didn’t break me. He didn’t make me quit. I love volleyball again.’”

After a particularly bad loss against Syracuse in Fall 2014, Murczek asked the team if they were miserable playing for him. All but one player raised their hand.

According to Appelbaum, this marked the first time the team shared their true feelings about the coach. Speaking out was risky, she said, because Murczek would use scholarships as leverage against the players.

“He would threaten to pull scholarships all the time,” said one former upperclassman volleyball player who spoke on the condition of anonymity. “We were financially bound to the team, and none of us wanted to lose our shot.”

One team member broke the silence in 2014 when she filed a Title IX complaint against Murczek. Soon after, other players began sharing their fears and concerns about their coach with senior athletic officials. Then parents began contacting university officials to address the issue.

“For many of the families, this consumed us — it’s all we talked about for months,” said Marty Appelbaum, Ciara’s father.

Email records show Marty Appelbaum met with various administrators, including Dean of Students Adam Goldstein and Vice President of Campus Life Penny Rue. His attempts to arrange a meeting with President Nathan Hatch were declined without reason. He told the OGB all of the officials remained tight-lipped, directing him instead to Ron Wellman, the Athletic Director.

“All of the administration knew about these problems, but they said it was an athletic department thing,” he said. “It [Wake Forest] felt like a big corporation. It just all went up to Ron Wellman.”

Rue declined to comment, referring to the issue as “confidential.”

One former team member, who declined to be named for personal reasons, said the players felt hopeless in their attempts to reach out to the administration.

“We tried every route, every avenue,” she said. “We tried talking to captains, assistant coaches and the administration. Nothing helped.”

In January of 2015, Murczek was cleared of the Title IX charges. Wellman addressed the team and parents in a private meeting afterwards, expressing his faith in the coach and outlining a plan to help him improve in his coaching based on complaints from the team.

Wellman told the OGB that he’s pleased about the direction of the team and that all of the issues with the team had been addressed.

“Talking about the past isn’t going to do any good,” he said. “We’ve moved on. This year’s team is much different.”

Murczek said players are now required to write a reflection every three weeks about their experiences on the team.

“My philosophy continues to change,” Murczek said. “Our job is to improve. The environment I’m trying to make is positive.”

But some players are saying things haven’t improved much.

“The psychological and mental abuse still happens,” one former team member said. “He still threatens scholarships. It’s kind of like he went through the motions of ‘changing’ but it wasn’t change. It was just when the administration was watching that he behaved better.”

Ciara Appelbaum quit the women’s volleyball team just one year after coming to Wake Forest. As a result, she lost her athletic scholarship.

“I just couldn’t stand to watch the administration turn a blind eye to the players’ struggles and fears about Ken [Murczek],” she said. “I don’t want him to continue this cycle at another school, even if he leaves Wake.”

She is one of three players and three assistant coaches who have quit since Murczek started coaching at Wake Forest in 2013. Only six players remain on the current team.

Murczek is now in his fourth season coaching the volleyball team. He currently has the lowest winning record of any Wake Forest volleyball coach in the past 20 years.

“If people had gone on the record earlier, including me, this might have blown up from the beginning,” Mr. Appelbaum said. “I’m doing this now to keep other girls from coming into this mess.”