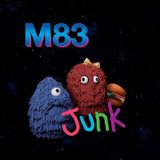 M83’s record “Hurry Up, We’re Dreaming” was a vast collection of 22 songs that meshed into a beautiful soundscape with occasional instrumental breaks.

Featuring notable singles like “Midnight City”  — that one popular song on your friends’ playlists in high school —  illustrate M83’s best work in mining the sounds and atmosphere of the 80s. Or at least it was the band’s best work.

Five years later, M83 has done it again — this time with a very peculiar album titled “Junk.” Although the first track “Do It, Try It” seems to be a departure from saxophone solos and an open door to heavier synths overlapping together, it is a hypnotic invitation to listen to the beautiful mess that is Anthony Gonzalez’s seventh album.

Everything from past M83 makes a return, ranging from brass sections and solos to gentle ballads. The album is all at once groovy, strange, beautiful, sad and most importantly, a call back to decades past.

Where “Hurry Up, We’re Dreaming” hearkened back to only the 80s, “Junk” takes a turn into the 70s’ lush arrangements, featuring string sections and soft piano accompaniments. The most extreme example of this is “Solitude,” which is reminiscent of a Bond theme.

With that said, there’s nothing over the top here, and the most beautiful songs on the album feature Gonzalez’s vocals. “Somewhere back in time I left a part of me. I want to see if you can try to bring it back to me.” His lyrics plead, the piano weeps and a string section works in time with a synthesizer just enough to bring the most visionary ELO songs to mind.

Right before “Solitude” is a ballad that isn’t only reminiscent, but it also sounds as if it were a song meant for the 80s that was never released. Featuring singer Susanne Sundfør, M83 masterfully crafts a piano accompaniment and soft saxophone solo that compliments Sundfør’s sweet questions. “Where are you now? When will I see your face again?”

“Junk” is also filled with a lot of other guest vocalists on more upbeat tracks. Along with Sundfør, Beck sings on the entirety of “Time Wind”, a song that definitely makes good use of his airy falsetto on top of Gonzalez’s cascade of synthesizers.

The most frequently featured artist is easily Mai Lan, who is heard throughout the album lending her gentle yet powerful voice to M83’s already strong sound. In contrast to past songs that featured the soft murmurings of a young child, Lan offers her voice as a full extension to Gonzalez’s music. In the album’s beautiful song, “Atlantique Sud,” Lan and Gonzalez sing to each other in French. They trade verses, voices intertwining as Gonzalez asks her to stay one more day while she tells him to wait for her to return.

Lan makes her debut on the album with the second track “Go!” However, the most interesting part of the song lies within the guitar parts that rise above all else. Gonzalez enlisted 80s guitarist Steve Vai writes his own solos for the song, and the result is an impressive song that stands out more than the album’s single.

Yet, even with other impressive songs like Walkway Blues or Bibi the Dog, the most fun songs are the tongue-in-cheek revival pieces Gonzalez places in the album as nonsensical interludes. “Moon Crystal,” for instance, sounds like a song you would hear in a JC Penny lobby. Everything is overly cheerful as violins rise and fall above the rhythmic synthesizer pieces. The song is strangely captivating and sounds like an odd hybrid between Kansas and everything you hate about going shopping.

The second instrumental “The Wizard” sounds as if the music is coming from a distant boom box, muffled from far away. Then all of a sudden, more than halfway through the song, Anthony removes the effect entirely. Nothing in the instrumentation really changes, but this simple trick makes the song all the more enchanting as it fades back into the distance.

That is exactly where the artistry in “Junk” lies. Gonzalez titled the album as such because he wanted to make an album that was “crazy and fun — an organized mess.” But under all the supposed refuse of over the top nostalgia lies at its core something that is still remarkable. M83 has returned with all the fun electropop synth parts, 80s jazz sax hooks and of course relentless drum fills. Despite hoping for a mess, “Junk” is in fact “organized” as Gonzalez said.