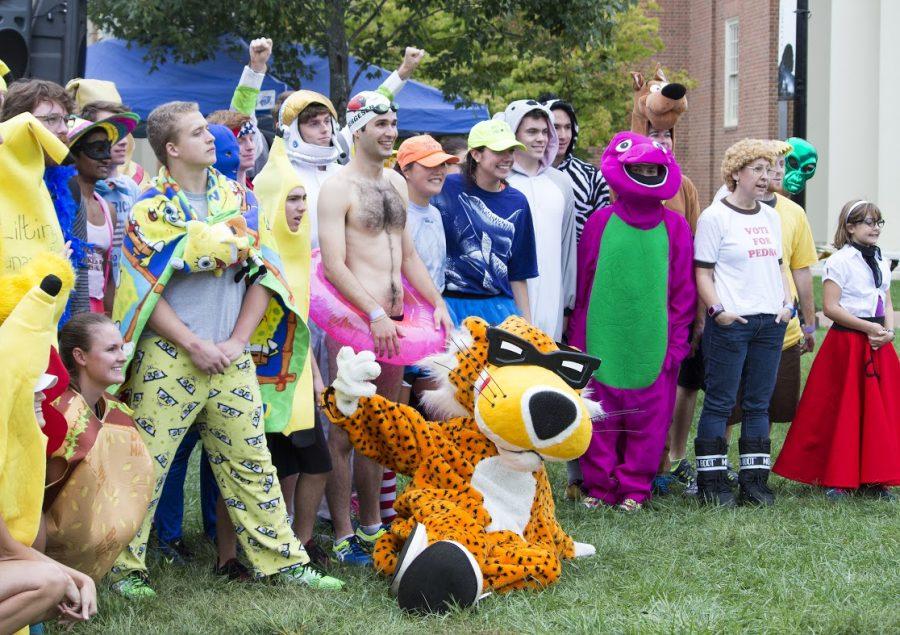 Wake Forest is home to many traditions that bring the university together.

Students, faculty and staff show their school spirit and commitment to “Pro Humanitate” while having fun and participating in the unique traditions of our university.

Each year student and faculty groups compete in this all-day run-a-thon, where teams run laps around Hearn Plaza in order to fundraise for the Brian Piccolo Cancer fund. The tradition, which began in 2003, also includes food, costume contests and many exciting challenge laps. Grab a group of friends and join a team this October.

Lighting of the Quad

This tradition, which also began in 2003, signals the arrival of the holiday season. With white lights draped across the magnolia trees, campus radiates with holiday cheer and winter-time festivities. Students and faculty come together for the passing of the candle on Hearn Plaza while enjoying hot cocoa and a capella concerts.

Through this three decade-old initiative, over 1,500 students are invited from the Winston-Salem community to Wake Forest’s campus to enjoy a safe space to trick-or-treat and play carnival games with costumed student escorts. All students are eligible to participate in this philanthropic festivity, so throw on your best costume and sign up to spend the afternoon trick-or-treating with a child.

While this event only occurs every other year and began with President Nathan Hatch’s Inaugural Ball in 2005, the semi-formal night of dancing with a live band is one that certainly shouldn’t be missed. Although Student Union won’t host the dance this year, President’s Ball will return next fall.

This tradition — a gathering of over 2,000 students, alumni and community members for the largest Moravian-style service in North America — is often cited as the campus favorite. Beginning in 1965, on the first Sunday of December, sweet rolls and coffee are served in Wait Chapel as candles are lit and carols are sung, to create a worship experience that honors the Moravian settlers of Winston-Salem. It’s incredibly beautiful, and there is no feeling quite like being unified with all of campus in song.

During exam week, the library provides extra workshops, 24/7 endless coffee and midnight snacks with some other fun surprises to make crunch time a little more bearable.

Another fundraiser for the Brian Piccolo Cancer Fund and Wake Forest’s largest philanthropy event, this 12-hour dance marathon and party is celebrating its tenth anniversary this year. After fundraising for months in advance, students and staff pledge to dance and stay on their feet for hours in support of those diagnosed with cancer.

If Wake Forest wins a major game in any sport, expect students to cover the trees throughout Hearn Plaza with toilet paper. Stock up now and be prepared to join in!

In the spring, Student Government and Student Union team up to bring a week of fun events to campus, culminating in the biggest concert of the school year. The festival also includes the popular Shag on the Mag dance, a southern beach party under a large tent on the lower quad.

This is the youngest tradition on this list, beginning in just 2012, but it is already a well known way students celebrate one of their most famous alumni, Arnold Palmer. On the day of the opening round of the Master’s Golf Tournament in April, the Traditions Council gives away over 1,200 Arizona Iced Tea Arnold Palmer tallboy drinks to students.