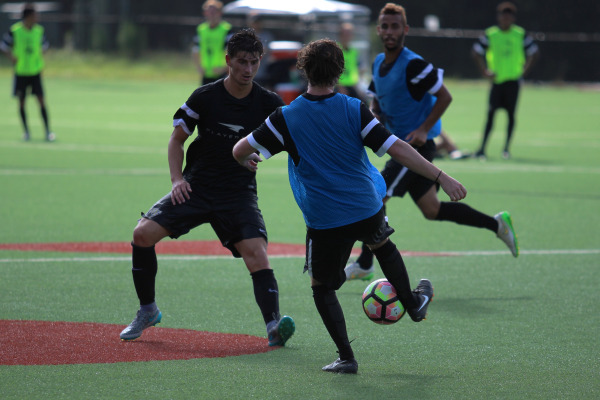 The Wake Forest Men’s team is coming off of one of their most successful seasons in recent memory, with an ACC regular-season title, a (temporary) No. 1 ranking and storming all the way to the Elite 8 of the NCAA Tournament before losing to eventual National Champion Stanford. With a season of that quality, this year’s squad has a tough act to follow.

The loss of ACC Offensive Player of the year and freshman phenom Jack Harrison seems to have left a hole in the Deacon offense, as his raw speed and playmaking ability gave Wake Forest a marked offensive advantage over many opponents last year.

So far this season, Wake Forest has struggled to put the ball in the back of the net, as their two preseason games were both scoreless draws.

In their first regular season game, Wake Forest could not equalize after an early St. Louis University goal put the Deacons down 0-1. Though the Demon Deacons outshot St. Louis 28-5, they weren’t able to convert their chances into a goal throughout the rest of the game, and took the loss in their opening game of the season.

Alas, the Deacs entered their second official contest having played a combined 270 minutes of preseason and regular season play without a goal to show for it, a feat that would have been unthinkable last year. Wake Forest represented the toughest matchup of the year for the opposing team, the Cal Poly Mustangs, but the Mustangs did not shrink in their play against the Deacons.

In just the 13th minute, Cal Poly’s Justin Dhillon was able to break down a quite shaky Wake Forest defense and slip a soft, arching shot into the top left corner of the net past Wake Forest freshman goalkeeper Andreu Cases Mundet.

To Mundet’s credit, the shot was placed in a nearly unsaveable position in the upper corner of the net. The preceding scrum inside the box that allowed Dhillon to break free with the ball was reflective of the miscommunication and panic that the Wake Forest defensive line showed when pressured in their final third of the field for much of the game.

Conceding early forced Wake Forest to respond, and the patient passing and creativity of Steven Echevarria along the left sideline finally notched the Demon Deacons their first goal of the 2016-17 season.

Echevarria fooled a Cal Poly defender at the top left corner of the box, and two quick touches later, slotted a low cross into the box that found its way past the outstretched hand of the Cal Poly goalkeeper into the bottom right corner of the goal.

The sideline brilliance of Echevarria was a near-constant source of offense for the Deacons throughout the match.

“Steven is a player that, each week, he gains confidence,” Muuss said. “His confidence is growing, and continuing that, as well as building up his fitness, can make him a big part of what we do going forward.”

The star of the night, however, was unquestionably freshman forward Ema Twumasi, who’s bicycle kick with 1.9 seconds left in the first half won the fifth spot on Sportscenter’s top plays the following night.

Wake Forest had earned a corner with just a few seconds left in the first half, and after a deflection in the box, Twumasi chested the ball and bicycle-kicked it with power past the unsuspecting Cal Poly keeper for Wake Forest’s second goal on the season which was also the game-winning goal.

In the second half, Wake Forest was able to maintain the slim lead, but Cal Poly never stopped pressuring the Wake Forest back line and nearly exposed them multiple times.

Wake Forest will take on Cleveland State this Friday at 7:00 p.m. in Spry Stadium.

Cleveland State is 2-0 and will be a tough early-season test for the Demon Deacons.