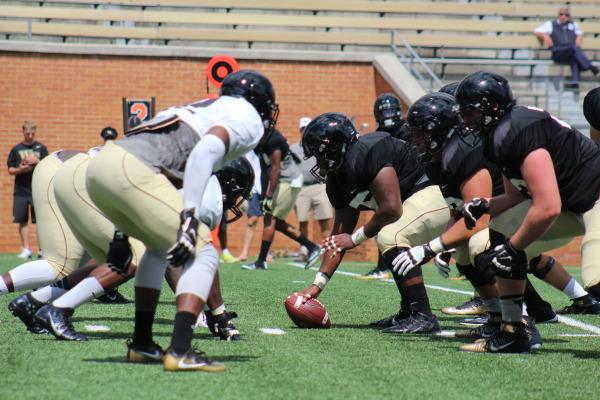 Following back-to-back nine-loss seasons in Coach Dave Clawson’s first two years as the Wake Forest head football coach, the Demon Deacons will look to turn the corner in the 2016 season.

Clawson has been known as a rebuilding coach, and at many of his previous stops, his teams have shown extreme improvement in his third season. The Deacs will be hoping that the same fate befalls them this coming season. While the Demon Deacons are still one of — if not the youngest team in the nation, they have much more talent and experience than they’ve had the last two years and will also benefit from one of the easiest schedules in the country.

The Deacs have a relatively easy non-conference schedule in which the most difficult game will likely be against a very average Indiana Hoosiers team. In ACC play, the Deacs will avoid playing Notre Dame, Miami and Virginia Tech, all traditional national powerhouses. Wake Forest will also be fortunate enough to play their most winnable games in the friendly confines of Winston-Salem. All of these factors will give the Demon Deacons a chance to return to a bowl game for the first time since the 2011 season.

Wake Forest opens up the season at home, under the lights against the Tulane Green Wave. Tulane is coming off a nine loss season in which they were blown out by both ACC opponents that they played; however, they did defeat Army by three points, just as the Demon Deacons did. The Deacs are favored by 17 points and should easily be able to defeat the Green Wave.

The Demon Deacons will then play likely their easiest game of the season at home against FCS school Delaware. The Deacons should defeat the Blue Hens rather handedly.

Following the Delaware game, the Demon Deacons should be no worse than 2-1 as they head to Bloomington, Indiana to face the Indian Hoosiers. Indiana does not have a historically strong football program, but they appear to be a year or two ahead of the Demon Deacons in terms of rebuilding. This will be a very tough game, but the Deacs certainly stand a chance. The Deacs will then travel to Raleigh, North Carolina to face in-state rival NC State, in what will likely be a loss. The Wolfpack are a very talented team and should have a fairly good team this season.

Syracuse has had the Deacs’ number over the past few seasons; however, the Deacs are much better this season and Syracuse will still be adjusting to first-year coach Dino Babers.

Next week, we will take a look at the Demon Deacons final six games, as they will hopefully have put themselves in position to become bowl eligible in their first six games.