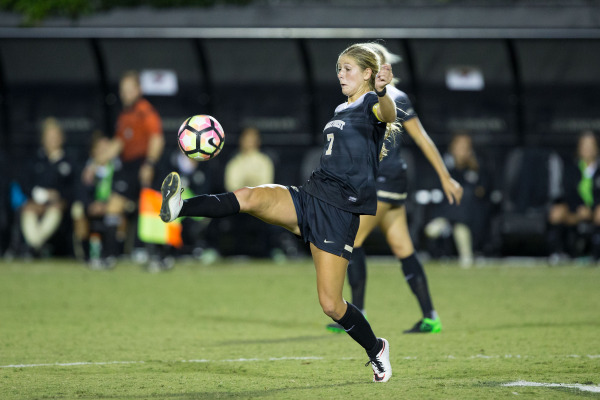 It’s been quite a while since Wake Forest women’s soccer head coach Tony da Luz has seen a team open up a season like this.

With the women’s soccer team’s most recent 4-0 victory over the University of New Hampshire on Sunday, Sept. 4, Wake Forest (6-0-0) has secured its best start to the season since 2009.

“We’re just focusing on winning games. We’re not waiting for a mistake or thinking about what bad could happen. We’re just playing, putting everything behind us and moving forward,” da Luz said after the team defeated Dartmouth on Friday, Sept. 2 for their fourth straight shutout victory. “There’s a real positive attitude towards the games.”

Coach da Luz is no stranger to success, of course. Entering his 20th year at the helm of the Deacons, da Luz has guided Wake Forest into the NCAA Tournament in 17 of his 19 years as head coach. Despite missing the tournament in 2014 and 2015, this year’s team is on track to return, and not as an underdog.

Wake Forest finished last season with a 5-12 record overall, while going just 2-8 in ACC Conference play. This year, the Deacs have already surpassed their five win total of last year and are eager to get more and show the nation what they’re capable of. Speaking at a practice before the contest against Dartmouth on Sept. 2, Coach da Luz echoed this sentiment.

“We’ve really defined the way we want to play, and everybody is a little more hungry this year,” da Luz said.

Hungry might be an understatement. Wake Forest has scored 15 goals in just six games this season. Last year, they had just eight goals after six games.

“You just have to be patient, wear them down and create opportunities,” da Luz said.

The defense has been the story of the year, however, as Wake Forest needs just one more shutout next week against Old Dominion to match the team record of six shutouts in a row. The Deacs have now gone more than 480 minutes without allowing a goal, something they’ve only done twice before, in 2006 and 2009.

Brimming with confidence, it feels like nobody will be scoring on the Deacs for a long time.

“We’re just playing our game and trying to stay disciplined in the way we play, as well as keeping our spacing and doing all the little things,” da Luz said. “We’re not looking over our shoulders for bad stuff to happen; those days are gone.”

On Sunday, the Deacs took down New Hampshire with four second-half goals, all scored within 30 minutes of each other.

Two seniors, Jenna Romano and Maddie Brock, both scored for the first time in their careers.

The scoring was completed after sophomore Peyton Perea knocked in a near post free kick from 20 yards out in the 78th minute.

With the confidence this team has, expect nothing less.