Wake Forest will be challenged in second half of season 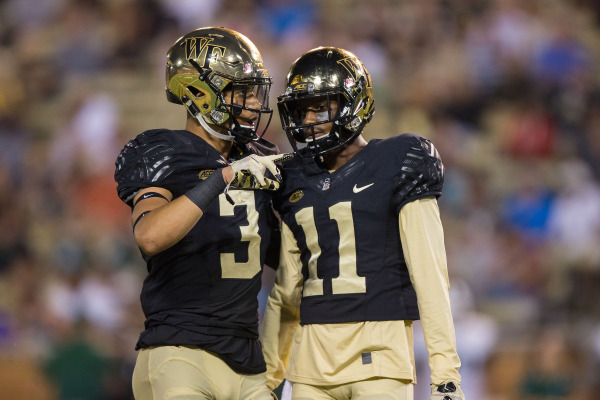 A positive second half of the season will be necessary for the Demon Deacons to be in a position of bowl-eligibility.

The Deacs will begin the second half of the season with a brutal road game at Florida State.

The Seminoles are once again a national title contender and have already shown their huge potential in a major victory over highly ranked Mississippi. While the Deacs were able to play tightly with the Seminoles last year, having a chance to tie the game very late, playing in Tallahasse is a completely different task. Hopefully the Deacs defense will be able to contain the potent offensive attack of the ‘Noles, but this game will definitely be an uphill battle for the Deacs.

Following the game against Florida State, the Deacs will enter a bye week before hosting Army. This week should give the Deacs a great opportunity to rest and regain their health before heading into a must win game against Army. The Deacs have squeaked by the Black Knights the past few years, but should be in a position to beat them this year. Playing in the friendly confines of Winston-Salem should be a major boost for the Demon Deacons and with a potential bowl on the horizon, the Deacs should do their jobs and easily defeat Army.

Following the Army game is another must-win home game for the Demon Deacons. Virginia and new coach Bronco Mendenhall, will travel to Winston-Salem. UVA has not gotten off to a great start this year, losing rather handedly to FCS Richmond. Virginia is most definitely in a rebuilding stage, and the Deacs will need to take advantage of this opportunity. In my opinion, the Deacs are a much better team than the Cavaliers, and they should be able to expose them in every aspect of the game and grab another important win.

The Deacs will be underdogs in their next two games at Louisville and at home against Clemson. Both of these teams will likely be players for the ACC championship and Clemson is looking to get back to the national championship after losing to Alabama last year.

The Deacs fought valiantly at home last year against Louisville, losing by just one point, but Louisville appears to be loaded this season and all road games in the ACC are extremely difficult. Clemson and Louisville both have quarterbacks that will be Heisman candidates throughout the year and are the catalysts for their teams.

In what may prove to be the most important win of the season, the Deacs end their year at home against the Boston College Eagles. I expect that the Deacs will come into this game with five or six wins.

If the Deacs have five wins by the game against Boston College, this will be a must-win game to gain bowl eligibility. Both of these teams will likely be in similar scenarios and are very evenly matched. The home field advantage should be the deciding factor in this game, and the Deacs will need to come together and get a win to make them bowl eligible.

This should be a very exciting year for Demon Deacons football, and hopefully the fans and students will show their support each week at the games. I believe that the Demon Deacons will finish with either six or seven wins and become bowl eligible again.