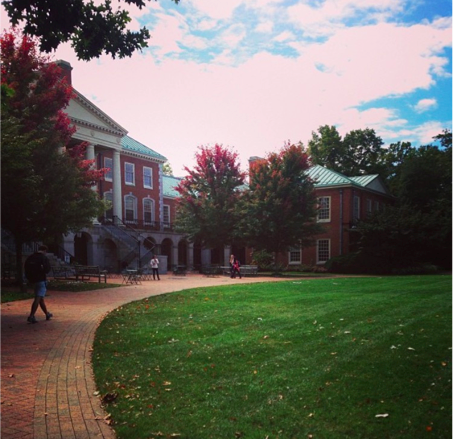 This was their home before it was ours.

Students lie content in their shadows, perceptions of the world formed into shapes and images defined by these trees that have grown and evolved over decades, or in some cases, centuries.

It is in the name, “Wake Forest,” after all. The school is known for and takes pride in its natural beauty that is dependent upon the existence of unique and historically significant trees. However, with new infrastructure constantly on the rise, concerns over how the natural forestation of the campus will remain intact have been presented.

It was not until the implementation of the WFU Tree Care Plan in 2011 that any measures were implemented to protect the very existence and value of these historic entities.

Even with this plan, however, there are still many factors that contribute to the protection of these historic and essential parts of not only Wake Forest’s campus, but the environment as a whole.

“Pro Humanitate is for the benefit of humanity,” said Dedee Johnston, the chief sustainability officer at Wake Forest, while discussing the Wake Forest motto’s relationship to a need for sustainable action.

Charlotte has implemented a plan to build up 50 percent more shaded regions by 2050 through planting trees in order to reduce the energy need in the city as well as create cooler temperatures. Planting more trees will not only help reduce greenhouse gases in the atmosphere, but will provide a necessary environment for life within the city’s ecosystems.

“Since 2011, more of an effort has been made to educate contractors and [the] campus in general on the importance of these trees and how we can save them,” said Jim Mussetter, the University Arborist.

The WFU Tree Care Plan includes an advisory committee to consult on new plans where it may be deemed necessary to cut down trees. The voting committee is led by Johnston and includes student, faculty and staff representatives along with Mussetter and the AVP for Facilities & Campus Services.

“It is a massive design challenge,” said Johnston, “to make a move from something old and dusty to something new, fresh and innovative.”

Projects such as South, Worrell, Dogwood, Magnolia and the new indoor training facility, are all recent examples of plans that were altered to save particular trees.

“We do not choose where the construction sites will be,” Mussetter said, “but the committee allows for influence in the adjustment of those projects, so we can save particular trees.”

Another issue recently came to the tree care advisory committee’s attention along the trails to Reynolda Village. The original plans to renovate the lighting on these paths would have significantly impacted and possibly killed some of the trees.

“With the help of [Johnston],” said Mussetter, “we were able to have the plan revised, which although greatly increasing the price of the project, saved many trees.”

The tree care plan is comprised of detailed instructions including how new infrastructure can be established, along with how newly planted and currently existing trees are managed.

Particular trees are given titles such as “Memorial Tree” or “Heritage Tree.” The trees that have been dedicated to honor the memory of a member of the Wake Forest community or have historical, cultural or aesthetic value due to age and stature are designated so they cannot be displaced by new infrastructure.

Mussetter, as the University Arborist, has the final say on all aspects of tree care as well as jurisdiction over which types of new trees can and cannot be introduced into the current system.

Although there are misconceptions on campus about the handling of trees and new infrastructure, any trees that are cut down are replaced in different areas around campus.

On most occasions, more trees are being planted than are lost in the construction of new infrastructure — an accomplishment for those in favor.

“I want people to know that we put a lot of work into these plans,” Mussetter said. “We do it so that in the future, the campus will continue to be known for its beautiful trees.”

“These trees have seen everything,” said Morgan Farrell, a biology major and environmental science minor at Wake Forest. “Without them, Wake {Forest} would not be the same.”