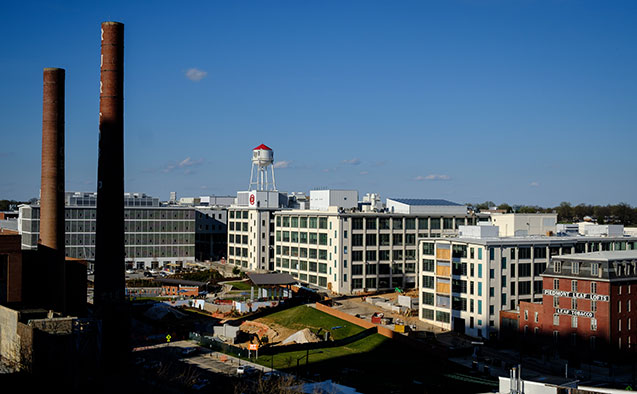 This January, students will take classes in the Innovation Quarter.

In the spring of 1956, Wake Forest College made the historic decision to move from its original home in Wake Forest, North Carolina to Winston-Salem. While the move changed the university’s physical location, the values held within the roots of the institution remained the same.

This January, Wake Forest University is launching a new program called Wake Downtown. It will offer interdisciplinary courses, mainly in different fields of science, to undergraduates in the Innovation Quarter of Winston-Salem. Dr. Rebecca Alexander, the director of academic programming for Wake Downtown, believes the move will continue the forward progression already established by the university.

“When Wake Forest moved in the 50s, some people probably thought it was crazy,” Alexander said. “I think taking this bold step will pay off for Wake Forest in that it will uphold its place as a risk-taking school with a foundation in liberal arts.”

The Innovation Quarter holds historic significance in Winston-Salem as the former headquarters for R.J. Reynolds Tobacco Company. Recently, it has been transformed into a hub for different kinds of innovation and research, two pursuits that originally attracted Wake Forest.

“The building is not going to belong to any one department,” Alexander said. “This will be a space where history, political science, chemistry, entrepreneurship and various other departments will exist, which will spread interdisciplinary scholarship and collaboration.”

Although courses from multiple departments will be offered, the Wake Downtown program is mainly geared towards undergraduates interested in the sciences or engineering. According to Wake Forest News, the program will offer a Bachelor’s degree in engineering and biochemistry, as well as courses in medicinal chemistry and drug discovery.

Mattie Usey, a sophomore interested in studying biology, plans to pursue a career in medical research for drug development in the U.S..

“I spent this past summer working in a parasitic disease research lab at the Centers for Disease Control and was inspired by the lack of new drugs for parasitic diseases,” Usey said. “I think that a class on drug discovery would be a great precursor to the types of studies I could potentially work on in graduate school.”

While significant planning has gone into the program, there are still many questions of logistics. One of the biggest points of concern is how undergraduates will get downtown safely and efficiently for class.

Future student Maggie Gregor is interested in studying engineering as part of the inaugural Wake Downtown program. However, for her, the idea of moving downtown seems daunting.

“I am attracted to the program because I’m interested in health careers that cross over into engineering,” Gregor said. “The fact that the program is in downtown Winston-Salem makes it slightly less attractive because I’m not sure how I would get down there without a car.”

Luckily for Gregor and other students voicing similar concerns, those in charge of Wake Downtown are steps ahead in pursuing solutions.

“We are not encouraging anyone to drive. The plan is to have shuttles leaving campus every 15 minutes from 7 a.m. to 8 p.m, and overnight as needed. We will still need to practice just getting everyone settled in and making it feel normal,” Dr. Alexander said.

Dr. Alexander remains confident in the significant planning put into Wake Downtown. The program had been nothing more than a dream for years but is finally becoming a reality in a few short months. As the start date moves closer, fears of the plan’s inadequacy are replaced with faith in the plan’s original goals.

“On the one hand, I’m worried that the logistics won’t run smoothly,” Alexander said. “But I’m just excited to bring undergraduates downtown and enable some of the strong sciences already established at Wake Forest to rise and be showcased.”