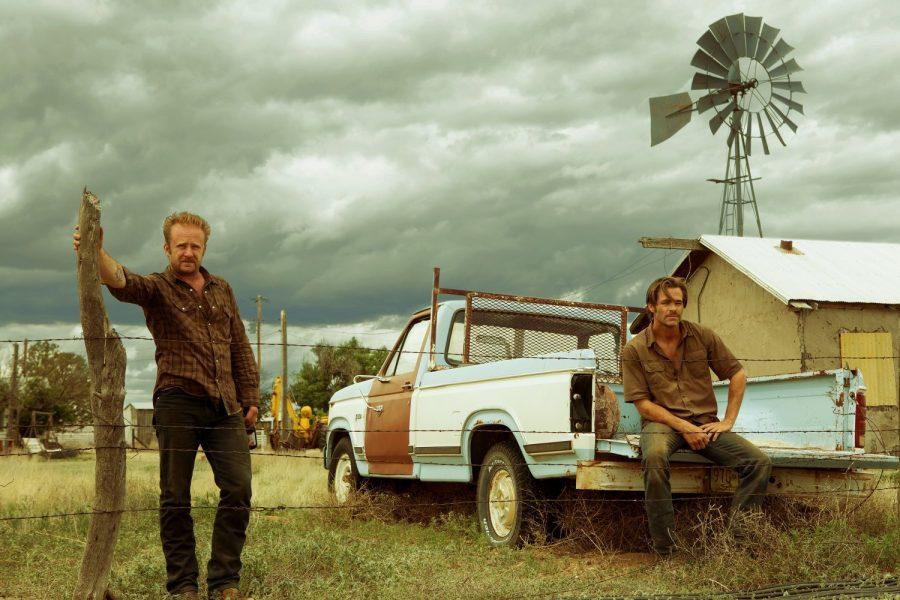 Follow two brothers in the scheme to save their family’s West Texas ranch in this thrilling contemporary Western.

From the onset of “Hell or High Water,” directed by David Mackenzie, I already knew I was going to enjoy the film.

Maybe it’s the film nerd in my nature, but even for moviegoers not familiar with the influential single shot opening à la Orson Welles, the deliberately slow camera movements are bound to spark some interest at the very least.

The movie starts with the camera stationed in a parking lot. The screen rotates, focused on a car that is mysteriously driving around a Texas Midlands Bank, revealing the setting as West Texas. As the camera continues to rotate almost 360 degrees, another car drives by the viewer and parks, while the first shifty car drives around the corner and disappears.

A woman gets out of the car while the camera continues to pan. She walks past graffiti on a nearby wall, but no matter how brief the moment is, you can still make out a very serious message that sets the tone for the whole film. It reads, “3 TOURS IN IRAQ BUT NO BAILOUT FOR PEOPLE LIKE US.” As the woman walks towards the bank, the camera finally stops rotating. Soon we see two men come around the corner with masks on and guns drawn.

As they start robbing the bank, everything is meticulously thought through to relate the bank robbery to modern times. From these first several minutes, I was completely engrossed in the film and the engaging characters each rich with their own backgrounds.

The cast features prominent names such as Chris Pine (“Star Trek,” “Into the Woods”), Ben Foster (“3:10 to Yuma,” “Lone Survivor”) and Jeff Bridges (“The Big Lebowski,” “True Grit”) who all deliver impressive performances.

Where Chris Pine is the calm and collected planner, his brother played by Ben Foster is the persistent wild-card. The two are chased by Jeff Bridges’ character and his Native American “deputy.” Where Jeff Bridges is a grumbling old man with racist jokes, his counterpart, played by Gil Birmingham (“Twilight,” “Rango,”) is modern, patient and obviously tired of the societal expectations on him.

What’s interesting here is the modern take that writer Taylor Sheridan (“Sicario”) masterfully twists around what would be a Classic Western if it were set in a different period.

At the start of the film, right after the impressive shot, the two brothers rob the bank. The two are desperate to save their family farm.

But there’s a lot more at risk here, and their plan is much more nuanced than a traditional bank robbery.

However, some of the plot points in the first 30 minutes are danced around and somewhat poorly executed. There’s just too much obvious exposition that really takes you out of the film when the two brothers are discussing their family and all that’s happened since Ben Foster’s character got out of prison.

Yet, I can’t stress enough how this really is the only fault in “Hell or High Water.” Taylor Sheridan writes an impressive narrative that is equally thought-provoking when paired against Mackenzie’s long shots akin to “Badlands” or “The Revenant.”

Tackling themes such as degradation of culture, natural cycles in history and the moral ethics of doing something wrong for the right reasons, the screenwriter playfully invokes this sense of loss and disappointment in the viewer. All the while, the film is entirely engaging and especially thrilling when Mackenzie lets the actors lose on some especially noteworthy scenes.

The film feels like a crescendo with occasional crashes throughout. Already being hailed by critics on IMDb and Rotten Tomatoes, “Hell or High Water” is a must-see film that reminds me of modern classics such as “No Country for Old Men” or “A Place Beyond the Pines.”

There’s a different aspect to this film that feels special. The film is not just a good film; “Hell or High Water” subverts what it means to make a Western.

The two brothers rob a bank to save their farm, sure. As one character tells Jeff Bridges in the film, “It doesn’t make sense. To be going around robbing banks. It ain’t smart.” But the two main characters, are robbing within reason, driving across states in their beat up cars, past oil drills and billboards on the highway.

“Hell or High Water” was the best movie I’ve seen in months. I couldn’t recommend it more. If you love old westerns, gritty movies based in realism and multiple engaging narratives, this is just the movie for you.