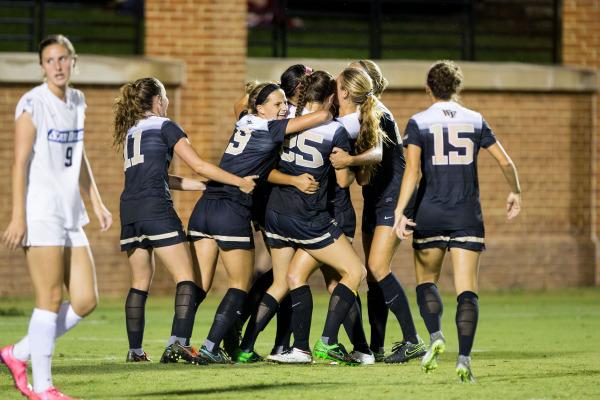 Wake Forest women’s soccer is ready to jump into conference play as the only undefeated and untied ACC team this year.

While the Deacs triumphed over both the Davidson Wildcats and Old Dominion Monarchs, the game against ODU tested the Demon Deacons more than any other this season.

Wake Forest defeated the Monarchs 3-1, retaliating vigorously after Old Dominion’s Iris Achterhof executed an upper 90 strike that skipped off the bottom of the crossbar and into the goal merely two minutes into the game. Just like that, the Deacs’ five-game shutout record was broken.

The team’s confidence, however, did not waver. Less than two minutes later, Wake Forest senior Caroline Wootten crossed to Maddie Huster with perfect accuracy, allowing Huster to tie the game with a powerful shot from inside the goal box. The Demon Deacons didn’t let Old Dominion take another shot on goal for the rest of the half.

Huster, who is listed as a defender, has had an attacking role in every game so far in 2016.

This year, she leads the team in both goals scored and points, with five and 13 respectively.

The charismatic junior takes on a whole new persona when she steps on the field. She is one of the most intimidating and powerful women’s soccer players in the ACC and has been crucial to the team’s outstanding success this season.

“I like playing where I can contribute,” she said. “We’ve been able to score a lot of goals so far. All of the forwards do their jobs fantastically well.”

The Deacs dominated the field after the first five minutes of the first half, as if they completely forgot Old Dominion had managed to score.

“I think in the past, we would have carried that [initial goal] around for a while, but this team is different and has a lot of character,” Head Coach Tony da Luz said. “We evened the score really quickly and got over it, so I was really proud of the kids for that.”

Not only did they even the score, but they solidified offensive communication, rapidly gained momentum and took shot after shot.

With two minutes left in the first half, Sarah Medina sent a beautifully arched pass to sophomore Bayley Feist who headed it in for her fourth goal this season.

“The first goal was a great response — a fast goal. The second goal, another great response. After that I thought we had control of the game,” da Luz said.

To ensure the win, Jenna Romano unleashed a powerful strike that sailed past Old Dominion goalkeeper Krista Moisio and flew just under the crossbar and into the goal.

“I kind of just knew I had to shoot,” said Romano. “No one was really in front of me, so I just took the chance.”

Old Dominion arrived at Spry Stadium on Friday ready to play aggressively. Taken off guard, the Deacs conceded an early goal but rebounded more fiercely than they’ve ever had to this season.

The Wake Forest women’s soccer team demonstrated resilience and power, which they preserved for Sunday’s match-up against Davidson, who they defeated 1-0.

Determined to continue making history as they move into conference play, the Deacs will take on Clemson on Sept. 16 at Spry Stadium.