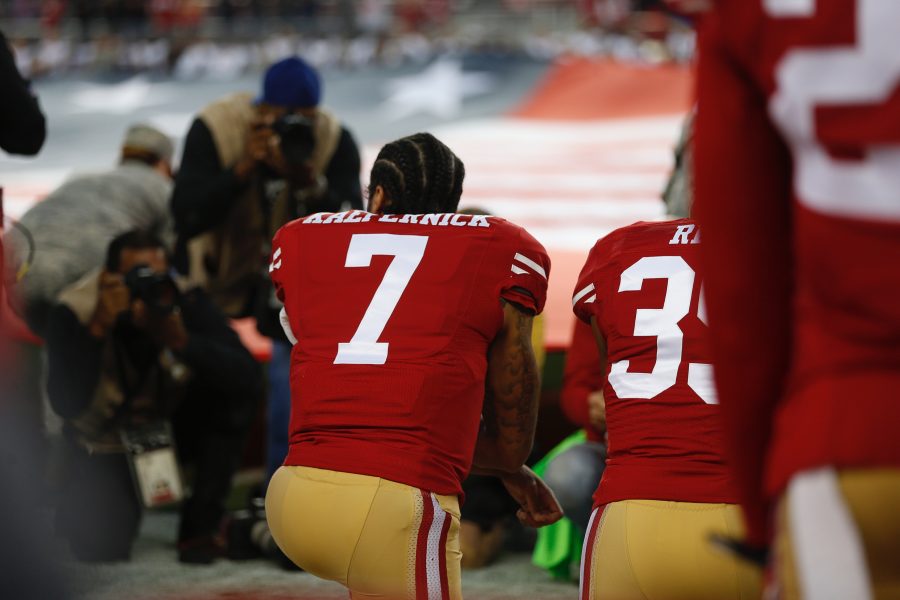 Colin Kaepernick has been making headlines recently not because of his talent on the field, but because of his refusal to stand during the national anthem prior to NFL games in protest of the wrongful treatment of African Americans and minorities in the U.S.

Kaepernick’s message has spread to other teams in the NFL. During the 15th anniversary of the attacks on Sept. 11, 2001, all of the Seattle Seahawks protested the national anthem in their season opener against the Miami Dolphins. The Seahawks linked arms in unity during the National Anthem. They acknowledged that this was the 15th anniversary of the attacks in 2001 and noted that this action was not an attack on the military and not an action intended to disrespect the day. Four of the Dolphins players also knelt during the anthem.

While there is criticism surrounding the decision to protest on the anniversary of 9/11, Kaepernick has received praise and criticism during the past few weeks. However, the 49ers issued a statement shortly after his first protest that did not criticize Kaepernick.

“The national anthem is and always will be a special part of the pre-game ceremony,” the statement said. “It is an opportunity to honor our country and reflect on the great liberties we are afforded as its citizens. In respecting such American principles as freedom of religion and freedom of expression, we recognize the right of an individual to choose and participate, or not, in our celebration of the national anthem.”

Kaepernick and the NFL are not alone in this protest. The U.S. women’s national team’s soccer star Megan Rapinoe took a knee before the game between the Seattle Reign and the Chicago Red Stars. Rapinoe spoke to John Halloran of “American Soccer Now” to explain her decision to kneel was a nod to Kaepernick.

“I know what it means to look at the flag and not have it protect all of your liberties,” Rapinoe said. “It was something small that I could do and something that I plan to keep doing in the future and hopefully spark some meaningful conversation around it. It’s important to have white people stand in support of people of color on this. We don’t need to be the leading voice, of course, but standing in support of them is something that’s really powerful.”

This protest has moved to other NFL teams as well, including the Tennessee Titans, the Denver Broncos and the Kansas City Chiefs.

While President Obama was abroad in China, he mentioned Kaepernick and his silent protest:

“My understanding, at least, is that he’s exercising his constitutional right to make a statement.”Obama said that Kaepernick is using his platform as a sports icon to send a message and that others before him have done the same.

While Kaepernick has received support from many, there is a lot of backlash on his actions. Kaepernick has faced criticism from those within the military and those who have military ties. On Sept. 1, the 49ers played their last preseason game against the Chargers in the Chargers’ 28th  annual salute to the military. Robert Muth, chair of the San Diego Veterans Coalition spoke on the issue to “USA Today.”

“I would not be surprised if there were some boo birds out when he’s announced,’’ Muth said. “Most people here have a connection to the military, whether if they served themselves or have close friends or family who have served. Issues like this are always going to be front and center.”

Kaepernick, however, addressed this by deciding to kneel and not sit during the national anthem to show his respect for the military. Kaepernick’s protest is not about the military but about the oppression of minorities in the U.S.

New Orleans Saints quarterback Drew Brees expressed dissatisfaction with Kaepernick and his actions. Brees disagrees with the methodology but not the purpose of the protest itself. Brees spoke to ESPN on the issue.

“I disagree. I wholeheartedly disagree,” Brees said. “Not that he wants to speak out about a very important issue […] There’s plenty of other ways that you can do that in a peaceful manner that doesn’t involve being disrespectful to the American flag.”

GOP Presidential Candidate Donald Trump said that Kaepernick should find another country to call home after his protest.

In an interview with KIRO radio in Seattle, Trump said, “I think it’s personally not a good thing, I think it’s a terrible thing. And, you know, maybe he should find a country that works better for him. Let him try, it won’t happen.”

Kaepernick has sparked a movement that has spread across the NFL and into other sports in an attempt to raise awareness of racial issues and how the U.S. has oppressed minorities currently and throughout history. While many support Kaepernick and the movement, the controversy of disrespecting the American flag is not one that is easy to resolve.