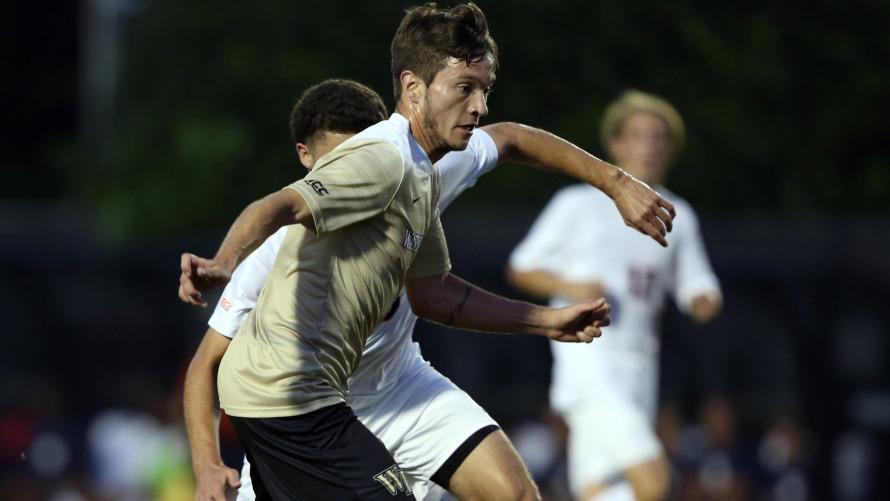 The No. 10 Wake Forest men’s soccer team finished their homestand 4-1-1, but the string of games in Winston-Salem didn’t come without struggle on the part of the Deacons.

Wake Forest’s past two games have only seen one goal, as they took down Virginia Cavaliers 1-0 and tied George Washington 0-0 on Tuesday.

In their game against Virginia last Friday, which was the Deacs’ first match in the ACC this year, Wake Forest outlasted Virginia’s strong forwards and physical play through regulation and two minutes of overtime to come away with a hard-fought 1-0 win. Virginia, a long-time ACC rival, came into the match ranked No. 13 in the country with a 2-0-1 record. “We’ve played games already, but they’re nothing like this,” said senior Hayden Partain who scored the game-winning goal. “The ACC is just ruthless, and I really feel like we just finished a wrestling match after every ACC game.”

Wake Forest could not break down the Cavalier defense, and the Cavaliers could not find any holes in the Deacon back line in regulation. The game shifted into a golden-goal overtime period. Fortunately, this was the time when Wake Forest was able to sneak one by the Cavaliers. In just the second minute of overtime, junior Jon Bakero was able to track down and dribble the ball into the lower left corner of the 18-yard box. Bakero played the ball on the ground across the mouth of the goal, and Partain was just able to tap the ball into the lower left corner of the net before the Cavalier goalkeeper could claim it. This gave Wake Forest a vital 1-0 win over their first ACC opponent of the year.

The Deacs could not transfer their momentum to the next game against George Washington, however, and failed to capitalize on multiple point-blank chances that they created in the final third of the field. George Washington, a physical team, stationed its defenders unusually high which stymied the Wake Forest midfield and defense. George Washington had multiple chances throughout the game, as they played up to the higher ranked Wake Forest’s level. Senior goalkeeper Alec Ferrell started and played all of regulation and both overtimes, making a clutch save in overtime to keep the score at 0-0.

Wake Forest will take on Duke this Friday in Durham, an ACC match that promises to be an intense and exciting contest.

Wake Forest will have to improve their finishing if they want to take down the Blue Devils.