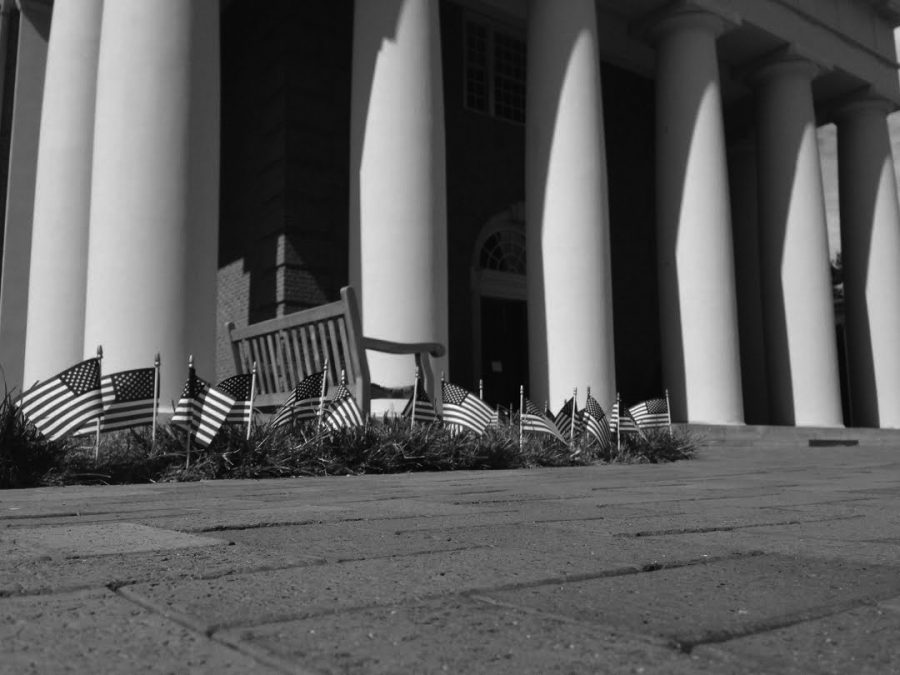 On Sept. 11, the 15-year anniversary of the terrorist attacks on the United States, Wake Forest hosted an interfaith memorial service in Wait Chapel to commemorate the lives lost on that day.

The ceremony began with a prelude by Sally Morris of the School of Divinity.

This was followed by Posting of the Colors by five students of the ROTC Color Guard: senior Mike Weber, junior Connor Murphy and sophomores Connor Felty, Jordan Harmer and Ethan Green. Those in attendance stood silently as the American flag was placed at the front of the chapel.

“The fact that it was interfaith was of particular importance because it cemented that while those who attacked us were of a particular culture and creed, we as Americans remain united, regardless of who we call god or the language we use to speak to god,” Ethan Green said of the service.

In keeping with the interfaith service, Christian, Muslim and Jewish prayers for peace were read in remembrance of the devastation that occurred 15 years ago. Gail Bretan, the director of Jewish programming, recited the Mourner’s Kaddish prayer. Imam Khalid Griggs, the associate chaplain for Muslim life, recited a prayer from the Muslim tradition. Then, Liz Orr, the director of Catholic programming, recited the Prayer of St. Francis.

“Each part of the service … asked us to commit to what often seems impossible — a life dedicated to Pro Humanitate and then beyond that to transcend our differences and atone for our prejudices,” Tim Auman, the university chaplain, said. “Such events not only bring about healing and reconciliation but may also lead to transformation. That was our hope.”

Junior Ashley Sadocha, who lost her father Frank Sadocha in the 9/11 attacks, lit a single candle at the front of the chapel before returning to sit with her family in a pew.

The majority of the service was led by Sam Gladding of the Department of Counseling, who also served as a first responder with the Red Cross soon after the attacks.

“I was a mental health counselor for the Red Cross shortly following the attack when the response went from ‘search and rescue’ to ‘search and recover,’” Gladding said.

In his speech, he spoke about unity and the importance of communication, engagement and empathy. He stressed that students should make a conscious effort to understand others, quoting the show tune “You’ve Got to be Carefully Taught” from the 1958 film “South Pacific.”

“The legacy [of those who died] depends, in part, on our behavior. We have a commitment beyond ourselves,” Gladding said.  “We remain committed to each other, to our country and to the principle of good.”

Several musical pieces were performed at the service, including “Peace, Salaam, Shalom,” “Imagine” and “O Beautiful for Spacious Skies.” Junior Suzanne Mullins performed “15 Chimes of the Carillon” on the Wait Chapel bells, which could be heard throughout campus around 2:30 p.m. and allowed students not directly in attendance to pause and reflect for a moment.

Virginia Christman, the associate chaplain in the School of Divinity, encouraged the audience to “live with love” in her closing remarks, in which she also reflected on how the Wake Forest student body reacted to the news 15 years ago.

As stated in the December 2001 issue of Wake Forest Magazine, “Members of the Wake Forest community reacted to the terrorist attacks as the nation did: with fear and outrage, with patriotism and compassion. In the days that followed, students, faculty, staff and alumni responded to America’s worst tragedy in the true spirit of Pro Humanitate. They held prayer vigils and fund drives; they gave the gift of friendship and the gift of blood.”

The campus ROTC Color Guard performed the Retiring of the Colors to close the ceremony, carrying the flags back out to the front of the chapel.