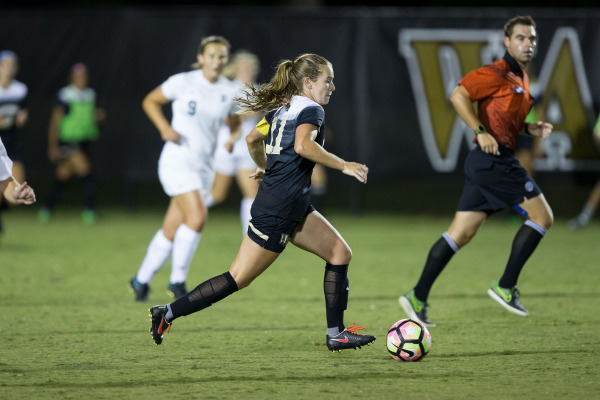 Madison Huster is listed as a defender in her Wake Forest student-athlete bio, but the do-everything junior for the Wake Forest women’s soccer team has excelled all over the field for the Demon Deacons this season.

Huster, who played in all 19 games of her sophomore season last year, has taken her game to a new level this year. In addition to leading the team in goals and points, Huster has notched three assists on the year already.

Huster, who scored the ninth hat trick in program history on Aug. 25 against FIU, has a proven eye for goal and ice in her veins. With two game-winning goals already this season, the 8-0-0 Wake Forest women’s soccer team feels confident at any point in the game knowing Huster is on the pitch.

What’s this season been like for you so far?

So far it’s been positive. I think coming off of our last two years, they have been pretty negative all around.

This year, we just kind of wanted to turn it around and bring some pride back to the program and do well for the program.

How have you developed as a player at Wake Forest throughout your career here?

At Wake Forest, we definitely emphasize doing a lot extra.

Anytime up here [on the practice fields] in the afternoon, you’ll see people working on their own and doing individual practice with the coaches or watching film, and I think that the environment here has definitely allowed me to get better.

Tony and the girls always keep it competitive, so that fosters development.

Tactically, how is this year’s team different than in past years? Is it more of a finishing in the final third or a full team effort?

Tony was very specific this year in the way that we wanted to play, and we came in and he showed everybody their role and what they needed to do. Everyone has just kind of thrived and built off of that.

Coach da Luz talked about the strong  mentality of this team and how you’re playing wihout worry of failure. As a player, could you talk about that?

I think last year, anytime we would go down in games, we just automatically thought, “another loss, another loss in our losing streak.”

This year, I think we’ve gone down in games and had an instant bounce back.

We’ve gotten goals right away and, nobody’s kind of hung their head and thought “oh crap another loss.” It’s always been, “oh, another chance to improve and get another win.”

How have the freshmen on the team this year adjusted to collegiate play so far, and as a leader on the team, how have you been able to mentor them and take them under your wing?

This year’s freshmen are different! They’re really focused, they’re pretty relaxed, they know what they need to do and they know their role.

I think they’ve come in and have already contributed in any way that they can, whether that’s coming off the bench or being a voice on the bench and just helping the whole team. They’ve done a really great job.

It seems that in every game, you guys are now matching a record or breaking a record. How do you stay motivated?

Any win that we get is positive. It doesn’t matter that it’s a record or whatever. I think we’re just happy to get a win every time.

Who has served as a role model for you throughout your soccer career?

She’s seven years older than me and plays professionally. I think even when I was little, she was a role model for me.

Her work ethic and drive have always inspired me.