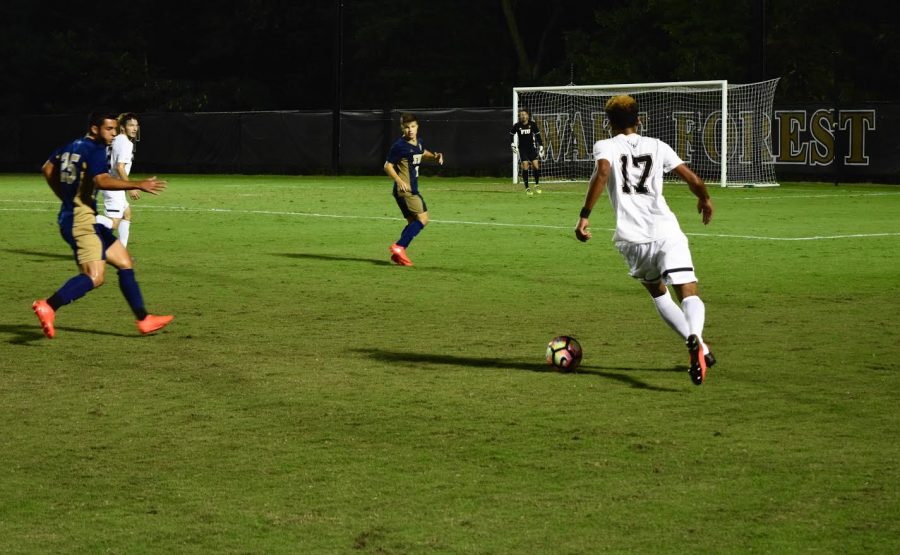 The Demon Deacons fought for their sixth consecutive shutout to set a new school record on Tuesday, Sept. 20, after beating Duke on the road 2-0 on Friday, Sept. 16.

Wake Forest prevailed over Duke on Friday thanks to goals from Ema Twumasi and Jon Bakero.

Tuesday night’s 2-0 victory over Florida International University advanced the men’s soccer team to 6-1-1. While they just broke the record for most consecutive shutouts, they are only 90 seconds shy of the 1992 record for the most time without allowing a goal: 638 minutes and 28 seconds.

Junior Jon Bakero found the back of the net off of a corner kick in the 24th minute to give Wake Forest the lead. This was his second goal of the season, assisted by sophomore defender Sam Raben. The ball found Raben’s head in the box and reached Bakero right in front of the goal.

Freshman Bruno Lapa secured the lead with only ten seconds left in the first half, scoring his first collegiate goal.

The play began with midfield captain senior Ian Harkes who sent the ball to senior Ricky Greensfelder by the corner flag. Greensfelder found Lapa’s right foot just in front of the net. As the ball was coming, Lapa “was just focused on finishing to help the team,” he said after the game.

“What meant the most was getting that win. Trying to help my teammates is my goal every game.”

Head coach Bobby Muuss, described this goal as, “what Wake Forest soccer is all about.”

Florida International came out very strong in the second half, testing senior goalkeeper Alec Farrell three times right off the bat. The game ended with the Decons down 12-8 on shots taken.

The Florida International offense, however, was unable to make it past Wake Forest’s strong defensive unit, which has not allowed a goal since Aug. 28.

Junior defender, Kevin Politz, describes the team’s success in shutting down the opponent’s offense as a group effort.

“The defense is doing a good job staying together as a unit, but it’s not just the backs preventing goals. It comes from the forwards and midfielders doing their job too,” he said. He looks forward to Saturday’s game against NC State to try for 3-0 in ACC play.

Bobby Muuss is now 8-0-2 in ACC play. While Wake Forest averages only 1.5 goals a game, he rejected the notion that they are not scoring enough, saying it only takes one.

In terms of breaking the school record for most consecutive shutouts, Muus said, “It was a nice feather in the guys’ cap, but overall we need to be more focused on our play because tonight was a little sloppy.”

He would like to see the team play with more urgency than they did tonight. He is, however, excited for the group as a whole, “from players one through twenty-eight.”

The Demon Deacons are excited to take on NC State at home this Saturday and look to break another record for most minutes without allowing a goal.

They only need to keep the Wolfpack from scoring for 90 seconds in order to break their second school record this week.