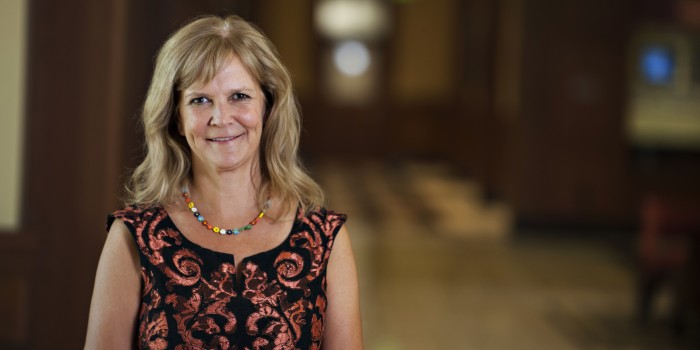 In celebration of Constitution Day, School of Law professor Wendy Parker opened a discussion on applications and interpretations of the Equal Protection Clause with the Wake Forest community on Friday, Sept. 16, at the Worrell Professional Center.

“I think everyone can have something to say about what they want their constitution to say,” Parker said. “The more students we have there the better.”

In the widely attended lecture, titled “Equal Protection & Black Lives Matter,” Parker asked the audience of both undergraduate and professional students to consider the language of the Equal Protection Clause and whether presidential candidates should be responsible for understanding contemporary constitutional interpretations, contextualizing the discussion through the “Black Lives Matter” movement and the responses it generates.

When asked to speak this summer, Parker considered contemporary concerns, hoping to prompt students to consider what it means to have equal protection under the law and how that includes protection from violence.

Parker began her lecture by asking attendees whether they’ve read the entirety of the constitution and discussing whether presidential candidates should have to do so. She followed up this discussion by asking whether candidates should be tested on their understanding before their inauguration in a way that is similar to a student passing his or her bar exam before practicing law.

Throughout the lecture, Parker used anonymous text message polling to gauge attendees’ support for the movement to address reactionary slogans like “Blue Lives Matter” and to compare the Equal Protection Clause of the U.S. Constitution to the South African constitution’s Article 9.

Parker chose the anonymous polling system, which displayed charts and graphics that shifted as results were sent in, because she felt that it allowed the audience to respond freely in real time to sensitive issues.

In one such poll, attendees found the language of Article 9 of the South African constitution to be preferable to that of the U.S. Equal Protection Clause, because it provided more explicit information about protected identities and actions taken to help those who have been disadvantaged by unfair discrimination.

Parker responded by encouraging the audience to consider that the more general language of the Equal Protection Clause allows its interpretation to evolve over time in response to new understandings of prejudiced or offensive views.

“I think we learn more about our own system by appreciating that many other countries have very different principles shaping their democracy,” Reynolds said. “I thought it was very effective to contrast a recently adopted constitution with our much older governing document.”

Constitution Day is observed on Sept. 17 to recognize the adoption and signing of the U.S. Constitution in 1787. Parker’s presentation generated a critical dialogue that candidly addressed issues facing the nation today while celebrating the work of the Constitutional Convention delegates long ago.

“I want to recognize the Constitution for what it is,” Parker said.

“We can think, 229 years later — do we know something now that makes us want to see it differently? We can celebrate it by thinking, how could we do it better?”

Parker was excited to see both undergraduate and law students in attendance at the lecture.

“I think law students and undergraduates took a lot away from the discussion,” Reynolds said. “While reminding us of the basic underpinnings of the Constitution, Professor Parker pushed us to think about how it speaks to contemporary issues.”