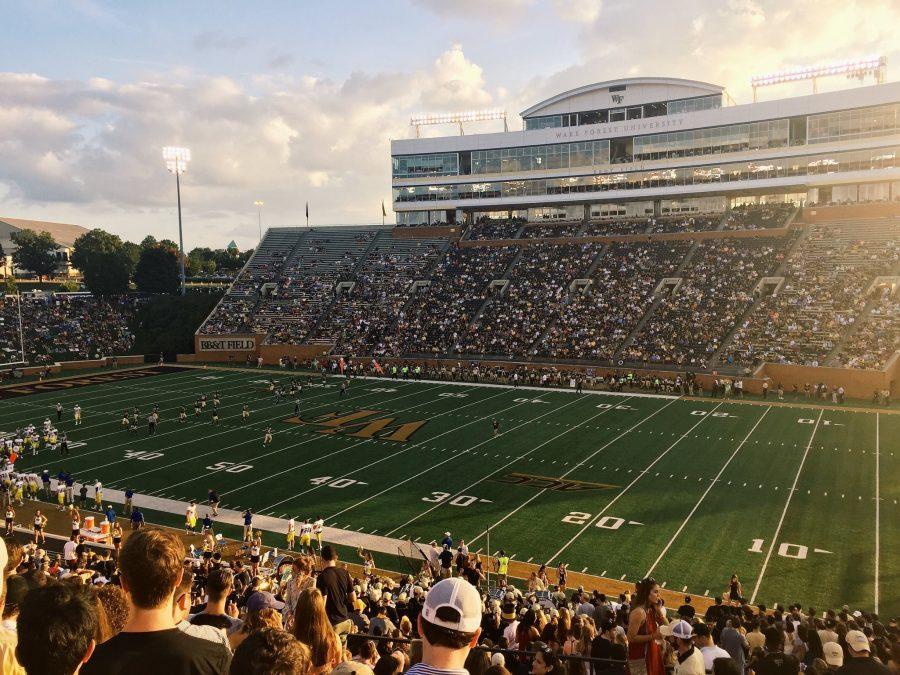 This past August, Wake Forest Athletics announced that alcoholic beverages would now be sold at the BB&T Field during games to patrons over 21.

Vendors, as well as the official stadium restaurants, can now sell beer and wine to those attending the game. This new policy was implemented in order to better serve the needs of alumni, community members and any other Wake Forest fans  attending football games.

According to Steve Shutt, the associate athletic director, the decision to allow alcohol sales in the stadium stemmed from the success of Top Hat Tavern and Deacon Tower, two restaurants in the stadium that have been serving beer and wine for the past few years. Shutt said, “We were looking for ways to increase the fan experience, and making these beverages more widely available was met very favorably.”

While there is additional revenue for the university coming from these beverage sales, the overall game day experience was the driving force behind this decision.

“When fans can sit at home and watch an event in high definition, they get replays and can provide their own beverage of choice,” Shutt said. “We want to make sure that we are offering some of those amenities as a way to make sure our fans come out to the game.”

The administration hopes to increase game attendance through this new policy.

Wake Forest is not the first ACC school to allow this kind of new rule; Syracuse and the University of Miami sell alcohol in their football stadiums, and the University of Pittsburgh also implemented this policy over the summer. However, Wake Forest is the only ACC school in the state to allow this. The administration does not believe that the new change will have a negative impact on our reputation in the state.

Furthermore, they don’t think it will affect students negatively. In fact, they’re hoping it will increase the number of upperclassmen who attend the games and stay for more than the first quarter.

Shutt and his colleagues in the athletic department are hoping that game attendance will continue to increase with the new alcohol sales as the season progresses.

So far, attendance has been lower than their anticipated goals, although weather may have played a role in the first game of the year. Still, Wake Forest Athletics remains positive and hopes to see a significant improvement as they continue to keep an eye on attendance.

In regards to tailgating, the university is hoping that “with the ability for those over 21 to purchase alcohol inside the stadium, there should be less motivation for students to drink heavily before the game,” according to Shutt.

Policies regarding underage drinking will remain the same. With this new addition to the stadium, precautions have been taken to protect against underage alcohol use. Students must present valid ID and then receive a wristband of a different color to show that they are of legal drinking age. A fan engagement team  will make sure that everyone at the stadium is enjoying themselves. They monitor fan overconsumption and underage drinking in order to maintain a safe environment for everyone at the game.

“I think it’s a smart move by the administration,” said senior Tim Woodin. “They are allowing people who may drink heavily before games to pace out their alcohol intake over a few hours.”

Wake Forest is not the only school to make this big change. As technology continues to make watching sports easier, athletic departments across the nation are working hard to keep up. On top of having good teams, the “fan experience” is now becoming an additional priority, one that may continue to spark change both here at Wake Forest and at colleges across the nation.