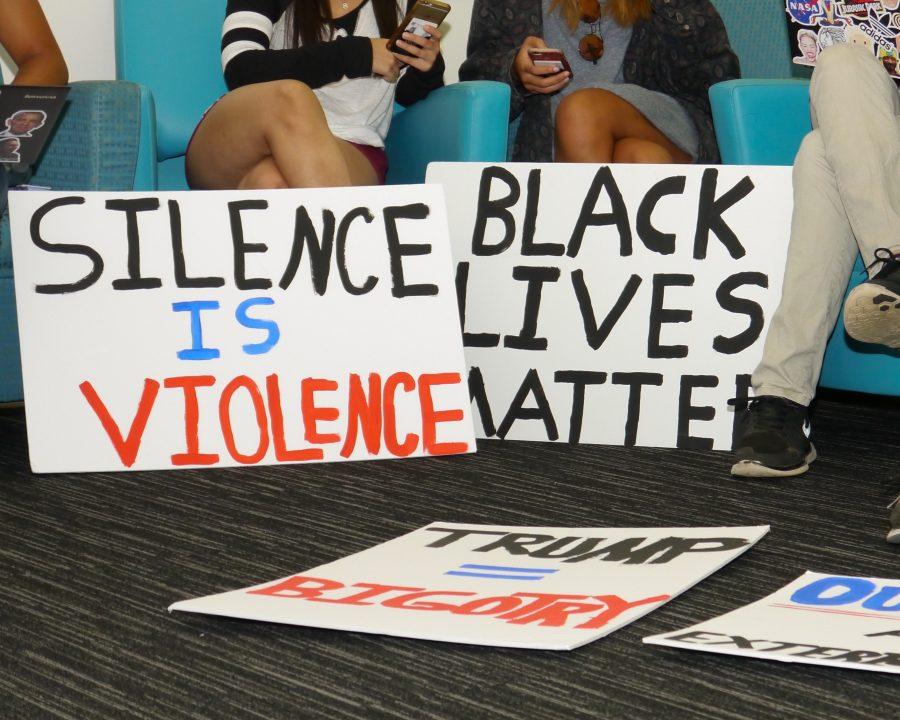 Several prominent staff and faculty members of the Wake Forest community, including dean of students Adam Goldstein and dean of Residence Life and Housing Donna McGalliard, hosted a discussion with students Monday, Sept. 19, regarding recent controversy about the housing policy on sign displays in dorm windows on campus.

The conversation was prompted by an incident last week in which residents of Magnolia were asked by Residence Life and Housing to take down signs in windows to keep with a policy which bans students from displaying anything in dorm windows. This includes political posters, alcohol bottles and Greek letters.

While the policy against displays in windows does include a caveat allowing students to display candidate endorsements, this caveat only takes effect during a 10 day period preceding an election. This year, that period does not start until Oct. 29, but will remain active through Election Day on Nov. 8.

A photo of the three window displays was sent in an email to McGalliard and her staff late last week, and the suites were promptly asked to remove the displays. After the signs from the photo and a few other window displays, including a gay pride flag, were taken down, many students submitted bias incident reports to the university. They referenced that Greek letters had not been removed from dorm windows and complained that the policy disproportionately affects students’ ability to express their identity on campus.

“The issue here is not whether people are expressing themselves in the windows. It’s whether [the community] has a problem with the way students interact with each other on a day-to-day basis,” said senior Collin Dobbins.

The policy has been placed under review for the time being in response to student concerns over the equality of expression on campus. In an email to students Wednesday, Sept. 21, McGalliard said that the policy will not be enforced during this review period.

“I am very committed to making sure that [students] have an opportunity, as residents on our campus, to let me know how policies are affecting [them],” McGalliard said.

“I think everyone can agree that there is a problem; certain communities don’t interact with each other. I think that saying let’s homogenize everybody, let’s have a uniform policy, let’s sweep everything, including all the self-expression, off the windows. Let’s not see it, let’s bury it. That doesn’t serve a purpose.”

The Bias Incident Response Team is composed of several faculty members and is dedicated to responding to bias incident reports on a weekly basis. Their function is to be a resource of help and support for students, but not to determine whether an individual incident did or did not have bias.

“When the reports started coming in, [the Bias Incident Team] met on Friday to make sure that we were learning everything we could and to understand how this was affecting students,” said Goldstein, a member of the team. “I think that concerns and criticisms we have heard over the past week have been very valid and have caused a lot of thought.”

Goldstein also mentioned that Wake Forest’s policy is not unique to the university, and that many university campuses have similar policies. Wake Forest’s policy was originally created in the 1990s to prevent students from displaying Confederate flags on campus in a time of political unrest. Each time a student has had a grievance against the policy, it has been recorded. Aside from complaints and concerns recorded this month, there have been three recorded student grievances against the policy in the last four years.

“[The policy] came as the result of a lot of concerns from students and the campus community at large about signs that were displayed in windows across campus. Some of those were Confederate flags, some of those were Greek letters and some of those were alcohol signs, or neon bar signs, encouraging alcohol use,” McGalliard said. “At the time, it became a question of the culture on campus.”