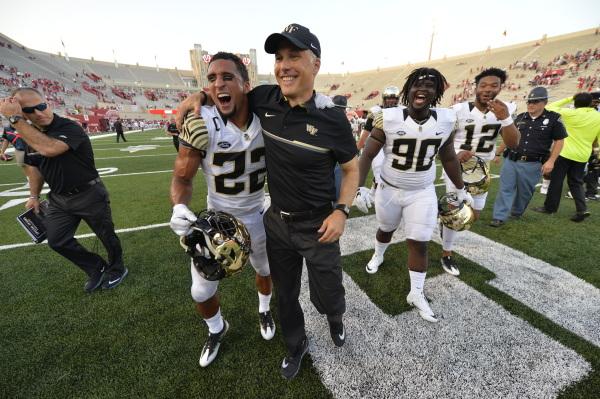 Week four of the college football season brought on a relatively calm slate of games in the ACC. The biggest news of the week was Wake Forest going into Indiana and defeating the Hoosiers.

The Deacs have already made a lot of noise early in the season and the perception of this team has shifted. With a big game coming up against the NC State Wolfpack the Deacs have an opportunity to really put the ACC on notice.

Elsewhere around the league, it was a relatively quiet week in the conference. The biggest surprise of the week came during the Duke and Notre Dame game.

The Blue Devils traveled to South Bend, Indiana in what should’ve been an easy game for Irish. Duke had struggled so far during the season and the Irish had very high expectations coming into the season. Notre Dame got off to an early lead and appeared as if they would run away from the Blue Devils; however, Duke hung around and was ultimately able to knock off the Irish in South Bend.

This was a huge win for Duke — a team that lost to Wake Forest at home by 10 — and an absolutely horrific loss for Notre Dame. The Irish, once considered a national title contender have now fired their defensive coordinator and could potentially miss a bowl game this season.

Perhaps the most exciting game of the week came in the matchup between North Carolina and Pittsburgh. The Panthers led the game for much of the way in Chapel Hill, but the Tarheels never went away.

Pittsburgh was leading by 13 points with six minutes remaining in the game and looked as if they would escape Chapel Hill with a big victory.

The Tarheels battled back and were able to cut the Pittsburgh lead down to six points with about five minutes remaining. The Tarheels got the ball back and scored an incredible touchdown with two seconds remaining.

This was a huge win for the Tarheels as it sepearates them from the pack in the ACC Atlantic Division.

The rest of the league won their games over lesser opponents in relatively easy and boring fashion. Conference play will finally ramp up this following week, and we should begin to gain some clarity in the conference.

The biggest game of the week within the conference, and likely around the country, will be the matchup between Clemson and Louisville.

Both teams are ranked in the top 10, and Clemson will actually be an underdog at home.

Louisville has dismantled everyone they’ve played this season, but I would not be surprised at all if Clemson finds a way to shut them down. It should be another great week in the ACC.