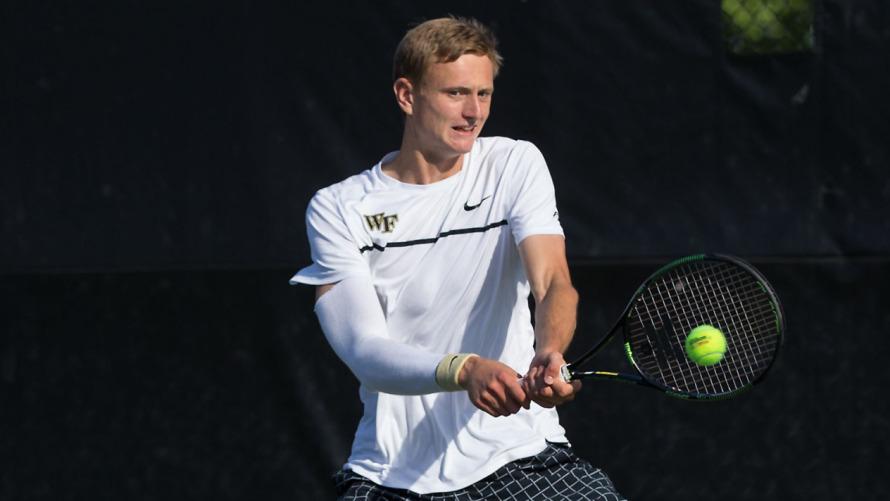 Wake Forest junior Christian Seraphim, originally from Munich, Germany, claimed the top singles title at Duke’s James Bonk Invitational. In the first round, he defeated Vincent Lin (Duke) 6-3, 6-2, while in the quarterfinals he defeated Sam Rice (UNCC), who was seeded fourth, 7-6, and 6-2. In the semifinals defeated Joshua Wardell (Florida), 6-1, 6-1 and beat Felipe Sarrasague (Elon), 6-4, 6-4, in the final to claim the victory.

Newcomers to the team Sean Hill and Charlie Parry each picked up a win on Sunday, getting valuable experience that will pay dividends in the future. Cristian Seraphim, who redshirted his freshman year, recalls his experiences as a Demon Deacon and praises the coaching staff for the decision they helped him make:

What does it mean to redshirt? How has it influenced you?

For me it meant to get a little stronger during my first semester, have a little more time to get adjusted to college in the U.S., and use that extra time to practice and grow as a person. I wanted to put myself in a position to be ready to play and compete.

My biggest adjustment was improving my conditioning and the extra time helped. I got physically and mentally stronger during my first semester.

Looking back, it was the best decision I made. I now have four and a half years to complete college, which I can do with a lighter courseload, thus allowing me to also concentrate on tennis.

What advice would you give your freshman teammates?

Do everything, give everything and put in 100 percent effort; don’t do things the easier way, just do them to the best of your ability, and the results will come.

What is your single greatest Wake Forest memory?

It has to be the ACC Championships last year. That was amazing. Winning it for the first time in program history was a great feeling, especially since we clinched the title when no one expected us to. In the finals against Virginia I was down in the third set 3 – 0, but came back to win 6 – 4. I then gave the stage to a freshman who finished off Virginia. The team got the job done. To win both individually and as a team provides the best memories.

How do you stay competitive with a roster that grows in depth?

It is extremely competitive, and there are a lot of really good people playing tennis here at Wake Forest. You have to embrace the fact that you have a chance every day to play with 8-9 sensational athletes. I try to enjoy this and not let this competition bring me down; actually, I try to let it lift me up.

That’s what we are trying to do in practice: ensure the whole team improves, we try to make each other better. I try to avoid negative feelings towards those I am playing against; I am competitive though, but no hard feelings because it is only a game.

Who served as a role model for you in your tennis career?

I would have to say Roger Federer. I watched him growing up. He is the perfect tennis player that everybody wants to be. With regards to American tennis players, I like John Isner, who is my height. He is what my game should be like.